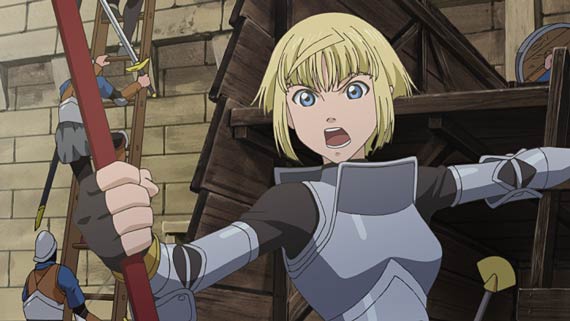 "Hey man, what are you playing?"

"I'm not playing anything."

"Well that's the PSP, and it's on. You must be playing something, nobody watches anything on UMD."

"Learning? Learning about what?"

"About ancient history… it's called Jeanne D'Arc, and it's all about this big war that happened, but it's weird because the two sides are the French and the English and at first I couldn't figure out was going on because there weren't any Nazis or zombies or anything."

"Jeanne D'Arc… is that the same as Joan of Arc? That one chick that dressed up like a guy to play football or something?"

"No, man, that was a bad '80s movie. This is a real-life thing where a chick dressed up like a guy to join the army"

"Whatever. I'm not much into the cross-dressing thing, so I don't keep up with that scene. So why are you playing it?"

"I told you, not playing, I'm learning. And because it rocks."

"Sweet… so what's up with all those little squares and stuff?" 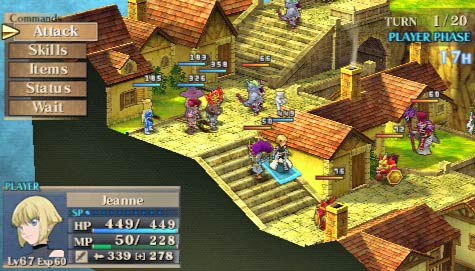 "So like, this is a Strategy Role-Playing Game, or SRPG as they're called on the interwebs. You start out with a set group of characters, and each one has their own specialty. Jeanne uses swords, and this purple pimp with the Conan O'Brien hair is a spear master. It's not like Final Fantasy Tactics where every dude is a generic peon."

"No doubt. Anyway, the squares on the battlefield tell you where your character can move, how far they can attack, and all that. Turn based, not real-time. It's pretty basic stuff like a lot of other games, but where Jeanne D'Arc takes off is that they added a lot of cool stuff. Like, for example, even though each character is pretty dedicated towards being a sword fighter or magic-user and all, enemies drop these 'skill stones' when you kill them. Your party can equip a bunch of them, and each one has special bonuses or powers. The best part is that when you finally meet this one special frog, it can swallow two skill stones and combine them into an all-new one. Not only can you give each teammate new powers and abilities, you can super-buff them if you spend a little time with the amphibian."

"That sounds all right, but not mind-blowing or anything. What else is good about it?"

"Well I think it's pretty special that the game manages to be both specific and customizable at the same time, but there's this other thing called "GodSpeed." A few of the main characters can transform and get all this glowing armor and stuff. If they give a finishing blow to an enemy while they're morphisized, they get to take another turn. If they kill another enemy, then they take another turn again, on and on until they run out of guys to kill."

"Yeah, seriously. Using GodSpeed totally turns unwinnable battles around, and kind of forces you to use a different kind of strategy than usual. I mean, it's actually better to hit a lot of enemies for a little damage and then wipe them all out with one of the powered-up guys than to do a standard slugfest. It's all good… but the best part is the educational value." 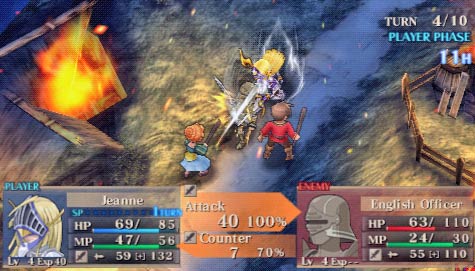 "The graphics are great and the music is too, but since this game is based on history, the developers really took a lot of time to tell the story and drop some knowledge. I mean, who knew that English people were possessed by demons back then, or that France had a race of animal people living on the outskirts of Paris? It's really easy to get involved with Jeanne and her crew, and half the story is told in full-on anime cut-scenes that look like they're straight out of Lodoss War or something. Jeanne D'Arc is hella better than staring at a textbook or listening to Mr. Rooney's boring lectures. I haven't even talked about the bonus side missions, the story branches, hidden items or any of the other stuff that makes this game the total package. If school made history this interesting, I'd show up to class more often."

"Damn, the game looks sweet. It's kinda making me wish I hadn't traded in my PSP to get credit towards the new Madden."

"You did what for Madden? I mean, I know there hasn't been a lot of reason to even have a PSP lately, but Jeanne D'Arc totally makes up for it. You should have held out. It's the best SRPG I've played in years and crushes just about everything else on portables, straight up… if you don't get that PSP back and give it a shot, you're missing out, bro. And hey, where's that five bucks you owe me?" Rating: 8.5 out of 10.