According to ESRB, this game contains: Alcohol References, Fantasy Violence, and Mild Language 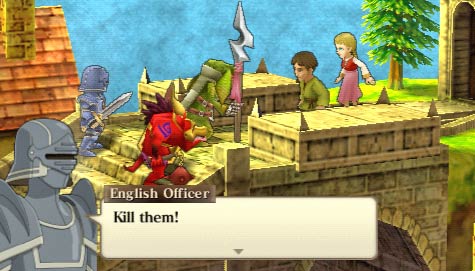 Parents shouldn't be too concerned. The graphics are fairly stylized in nature, and never get gory or explicit in any way. The combat consists of big-headed characters whacking evil knights and monsters with swords and magic spells, so there is no realistic depiction of violence. There is no questionable language worth mentioning, and no sexual content.

SRPG fans need to set up and pay attention because Level 5 has dropped the best game in the genre since Disgaea, as far as I'm concerned. The story and characters are well-written, with more than a few dramatic high points. The play is perfectly balanced, and has a good mix of dedicated character types and enough customization to satisfy without getting bogged down in minutiae. The sights and sounds are top-notch, and the anime cut-scenes push the entire package over the top. Side missions, hidden items, multiple paths… what else do you need to know?

Deaf and Hard of Hearing gamers get the short end of the stick on this one. Although the dialogue during in-game cutscenes and play are presented through text, none of the speech from the anime is subtitled—a serious bummer. Besides that, there are no significant auditory cues during gameplay and everything can be successfully accomplished with the sound off… just get ready to track down an FAQ to read what was said during the movies.