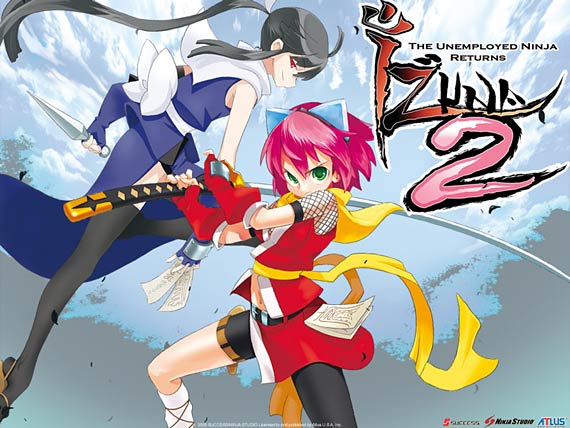 Although Atlus has been on an incredible hot streak lately with games like Persona 3, Etrian Odyssey II, and R-Type Command, no publisher on earth has an output that's pure gold. A little chaff is bound to sneak in with that sweet, sweet wheat, and in this review I'm culling it out. The chaff in question? Izuna 2: the Unemployed Ninja Returns.

The latest entry into the roguelike genre (which has seen a mystifying surge in popularity lately) Izuna 2 and others of its kind such as the sublime Mystery Dungeon: Shiren the Wanderer or the younger-skewing Chocobo's Dungeon series aren't bad games when done well, but by definition they generally only appeal to the hardest of the hardcore—for those not familiar with the genre, common traits are randomly generated dungeons to explore, randomly generated items to find, and death while adventuring usually carries a penalty of getting sent back to a nearby town with no money, no items, and all experience lost. No big deal, right?

To its credit, Izuna 2 is perhaps a little friendlier than most in the sense that it tweaks the standard formula in the player's favor. 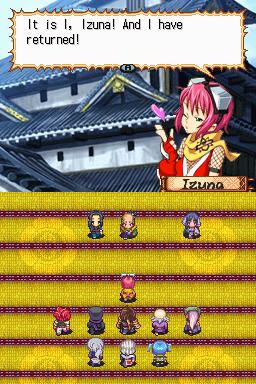 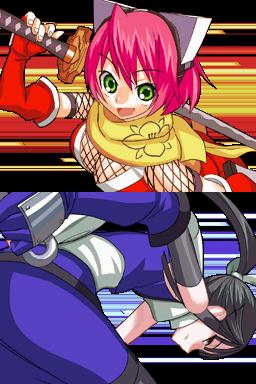 For example, rather than adventuring alone, the titular busty ninja can bring along a companion who can take over if needed—sort of like a second chance in the case of an untimely defeat. Additionally, Izuna lets players keep the experience and levels they've earned even after death, meaning that it's a lot less likely that the squirrels on floor three will be an instant game-over after a few stat-building restarts.

However, even though it's good to see that Ninja Studio was willing to ease back on the usually-overpowering difficulty in a game of this nature, that's not to say that everything here is rosy.

First and foremost, Izuna 2: the Unemployed Ninja Returns suffers from painfully low production values.  The graphics here would look a little below par when compared to things from the 16-bit era, meaning that today they're functional and little else. There are plenty of games able to deliver more appealing visuals on the same hardware, so there's no real excuse for doing things on the cheap here. 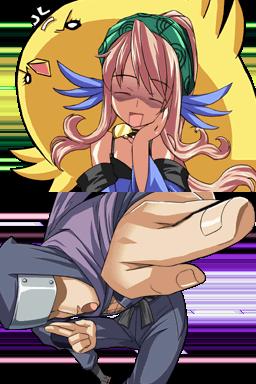 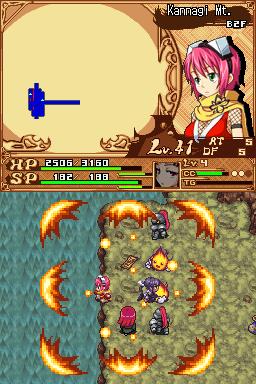 Beyond the unappealing graphics, the story and characters are quite irritating.  It's granted that games in the roguelike genre aren't generally known for having great stories, but I quickly grew to hate the trite quips and throwaway dialogue, dreading every time I'd have to chat with villagers to receive my next mission. "Inane" is the style here, so unless this is a preferred theme it's likely that players won't be glued to their DS simply to find out what happens next. (Hint: it's another dungeon.)

There are a few other rough edges that I personally would have liked to have seen ironed out like adding a map function in towns, holding more than just twenty inventory items, or clearer descriptions for the cornucopia of talisman pickups (given Japanese names and numbers), but those aren't major crimes. The real problem with Izuna 2: the Unemployed Ninja Returns is that it's an underachiever in in a very niche genre, and it's tough to get excited about something like this when there are other games available that do the same thing, only better.

Being average isn't a bullet-point for the back of a box, and if someone's going to play a potentially punishing, definitely repetitive roguelike, I can't imagine that they'd want to put that kind of serious effort out for something that's just average, at best. Rating: 5 out of 10.