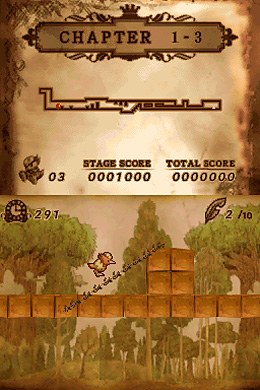 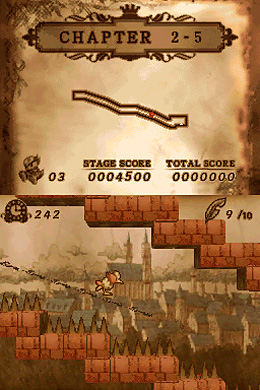 LOW The controls and central mechanic never come together.

WTF The colors make it difficult to see except under optimal conditions.

The latest project from Sonic the Hedgehog developer Yuji Naka, Ivy the Kiwi? brings both Wii and DS gamers an all-new IP with promise of side-scrolling greatness. From such a well-known creator, one could hardly hope for less.

The title's central concept puts a cute-as-a-button bird in a series of 2D levels made up of blocks and spikes. Ivy runs from left to right at a constant speed, not directly controlled by the player. In order to get this little avian to the end of each stage, players use the DS stylus to draw stretchy vines. These vines can be used as bridges, as trampolines, and basically as a means to "herd" the bird and keep it from danger. On paper this seems like a hit in the making, but I found that the reality fell a bit short, for several reasons.

The first? Ironically, speed. Ivy moves at a pretty good clip, and although there is a teeny-tiny map on the upper screen of the DS, I found that the game typically did not display enough of a level to feel comfortable with the speed of progress. I often fell into unpredictable peril, and replaying stages to memorize where the danger zones were began to irritate fairly quickly.

Another issue for me was that the mechanics of drawing the helper vines on-screen aren't nearly as natural and as polished as they could be. For example, there's a limit of three vines that can exist simultaneously, and when a new one is drawn, the oldest one disappears. However, there's no button to wipe all vines off the screen if desired, and I often found myself drawing useless vines up in a corner in order to cycle through them fast enough to clear an area where I wanted a new one to go.

Ivy's speed (again) also makes it difficult to use the vines with precision. Rather than careful planning, it often felt closer to reflexive skritching—I never reached a point in the game when drawing and controlling the vines came effortlessly, and I constantly felt as though I were fighting the vines and the bird at the same time. In a formula where the player's only means of interaction is something so cumbersome, the result can only be frustration.

Those issues aside, the levels have a uniform sameness throughout. I never hit any portions that were more exciting or fresh than the others, and before I had even reached the halfway mark, I had already started feeling as though I had seen everything the game had to offer. The thought of replaying the same stages in a different mode for a better score and faster time held no appeal whatsoever.

Finally, though I don't usually make a habit of discussing graphics, Ivy the Kiwi? Is drawn in vaguely "storybook" style, and everything is rendered in brownish, muted tones. I found it extremely difficult to see the game clearly under anything except optimal conditions, and felt as though the developers should have made greater use of color and contrast in order to make the graphics a bit more player-friendly. Struggling with the vines and keeping the bird from throwing itself into a pit was enough to handle; I shouldn't have to struggle just to see what's on the screen.

While Ivy the Kiwi? is an incredibly cute character and makes a valiant attempt to bring back a style of game that few developers have attempted in recent years, the core concept never quite finds happy coexistence with the player interface. For project as simple and straightforward as this one, that particular barrier proves too great to overcome. Rating: 4.0 out of 10.

Disclosures: This game was obtained via publisher and reviewed on the Nintendo DS. Approximately 2.5 hours of play were devoted to the single-player mode, and the game was not completed. No time was spent in multiplayer modes.

Parents: According to the ESRB, this game contains comic mischief. In this particular case, I suppose "comic mischief" means watching a small birds spin into rats, or fall onto deadly spikes with absolutely no graphic depiction of violence. This game is about as safe as they come, so while kids might get a little frustrated, it won't corrupt them in any way.

Deaf & Hard of Hearing: You don't have anything to worry about. There's no spoken dialogue anywhere in the game, and all instructions are relayed via text. There are also no significant auditory cues, meaning that the game is totally accessible.