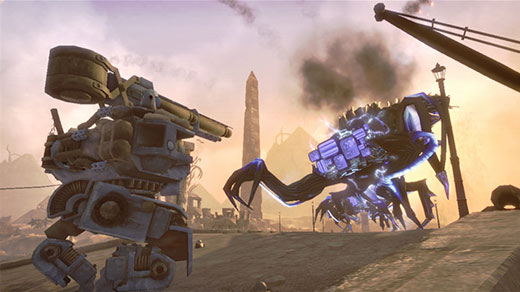 LOW Realistically, I'm never going to get a full squad of four together.

WTF Double Fine made this? Really?

Full disclosure, I'm not much of a Double Fine fan.

I downloaded the demo for Iron Brigade when it released in 2011 (it was called Trenched back then) because I love robots and mecha, but I never actually got around to trying it—probably because I was less than impressed with the studio's other work.

My oldest son was with me for the summer and I was struggling to find co-op games that were appropriate to play with my youngest still in the room.  Out of the blue, I remembered the demo that had been sitting on my hard drive all this time, and we decided to give it a whirl.

Six hours later, we had blown through half the campaign and were grinning from ear to ear.

Iron Brigade is a Tower Defense title at its core, but it's one of the few which allows the player to take an active role in defending, rather than asking them to set up turrets and sit back while crossing their fingers. In this way it's similar to titles like Toy Soldiers and Sanctum 2 (which are both great, by the way) but puts its own spin on things by mixing a 50's vibe with classic sci-fi and lumbering robots, all in equal measure.

At the beginning of each level, the player will have a structure or two to defend, and he or she does this by piloting a "trench"—a mobile, robotic gun platform that can also call down turrets to be placed anywhere on the map. An army of enemies then comes down in predictable waves, and it's up to the player to decide whether to focus on setting up defenses, fighting the creepy-crawlies directly, or mixing things up.

Choosing the proper technique for each situation is where Iron Brigade shines thanks to the level of customization. Each trench has an unusually wide array of chassis, legs, guns, and supplementary armaments. In some situations it's better to go with a light, mobile trench with greater turret capability. Other times I'd prefer to gear up the heaviest frame with laser cannons and howitzers for direct assaults. The diversity of equipment was surprising, and tinkering with the loadouts had a tremendous effect on battlefield efficiency.

(PROTIP: Players who pop for the Rise of the Martian Bear DLC will get even more gear, leading to even more possibilities.)

The rest of the game gets an equal amount of attention with smooth, attractive graphics, battlefields that offer a wide variety of challenges, snappy writing with some good zingers, and a commitment to the concept of soldiers in walking tanks that sells the experience overall. Every aspect is polished and well-realized, and that's not something many titles can claim.

The icing on the cake is that the game is designed from the ground-up to be cooperative. Although it's absolutely possible to play through the campaign solo, word on the street is that the endgame gets difficult for lone wolves. However, up to four people can play together, and while I'm not generally a fan of multi, this is a sort that I do enjoy. In fact, some of Iron Brigade's best moments were sitting with my son and discussing our loadouts prior to each deployment—he favored playing the sniper role, and I liked to get up close and personal, so making sure we brought complementary gear for our differing roles was both vital and entertaining.

I'm going to be totally honest here (and I'm sure some will be irritated that I'm saying it) but Iron Brigade feels absolutely nothing like the other Double Fine games I've played, and if I'd known it was this good, I would've jumped on it years ago. It looks fantastic, it plays fantastic, and it's got a shocking amount of depth for an Xbox Arcade title. It comes absolutely recommended to anyone interested in robots, 50's sci-fi mashups, or solid multiplayer action, and as for me? I've got a new favorite 360 title. Rating: 9 out of 10


Disclosures: This game was obtained via paid download (with DLC) and reviewed on the Xbox 360. 12 hours of play were spent in the campaign playing the entire time in co-op, and the game was completed.

Parents: According to the ESRB, this game contains: language, mild suggestive themes, use of tobacco, and violence. The violence is all about robots shooting weird electro-monsters, so it's pretty standard video game stuff. There are a couple of mild words here and there, one win animation shows a character chugging whiskey and another shows one lighting a cigar. The suggestive themes are limited to cheesy text phrases printed on the covers of faux magazines.

Deaf & Hard of Hearing: All dialogue is subtitled. During battles, some waves of enemies are signaled by audio screeches or roars. There are also visual cues, but they can go unseen if the player isn't looking in the right direction. Prepare for a slight increase in difficulty if the audio cues can't be heard.