While at the most recent Seattle Indie Expo (SIX), I had the chance to meet Jesse Turner, artist for the recent iOS release, Shellrazer. I was blown away by his energy and enthusiasm, and there's no question he's a very talented artist. Dude can draw the hell out of turtles, yo.

Although I didn't have a ton of time at the show, Jesse was quite gracious and willing to follow up with me afterwards, and here's what he (and his teammate Nick Waanders) had to say.

Thanks very much for taking the time, guys! To start off with, can you tell me who the Shellrazer team is? what are your backgrounds, your previous experiences, and so on?

Jesse: I've always drawn a whole pile. I tried film for a bit and moved some lights around, and was a 3D artist in games for about 3 years after that. I drew for cartoons for about a year and through a 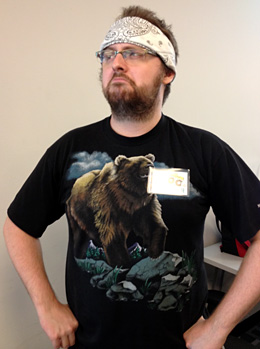 Nick: I started my professional games industry career in 1999. I've worked at Guerrilla Games in the time it was still called Lost Boys Games, and at Relic Entertainment. In 2007 I started Slick Entertainment with a former colleague from LBG. The shipped titles I've worked on are Homeworld 2, Warhammer 40,000 Dawn of War, The Outfit, Dawn of War: Dark Crusade, N+ (XBLA), Scrap Metal (XBLA, iOS), and Shellrazer.

So, a turtle with guns on its back. How did Shellrazer come about?

Nick: It started about 9 months ago. My business partner, and also artist at the company, decided it was time for him to do something else. This put me in a bit of a conundrum: Should I continue working on games by myself, or should I go work at an established game studio again?

I decided to continue by myself, and shortly after that decision was made I met Jesse Turner at the Full Indie meetup, a monthly indie developer meetup in Vancouver. We hit it off and we started working on Nature of the Beast (the working title for Shellrazer).

After a month we had the prototype ready and we showed it to some people at the next Full Indie meetup. There I met Shane Neville, who also worked at Relic, but at a different time period than me. He signed up for the tuning, design and PR & marketing. A few months of intense development later, we needed audio, and we met with Jennifer Lewis, again at the Full Indie meetup.

Jesse: It was originally going to be a much simpler game with only one weapon on the back of a turtle with rudimentary speed controls. I wasn't too familiar with touch controls at all, so Nick's familiarity with the interface really helped give it some legs. After we had a little prototype with some baddies and weapons we knew we needed some solid design work to make the thing fun so that's when we got Shane on board.

How long did it take to put Shellrazer together? As the artist, what was your process?

Jesse: We built and shipped Shellrazer in about 6 months. We wanted to make it quicker but after Shane brought a whole bunch of great things to the table we knew it would take a little longer and be worth our while.

I'm a pretty fast artist and I can get stuff done quickly, which made making the game really interesting. Basically we never "Pitched" anything on paper, we just built it and tried it out. This resulted in a lot of things being thrown away but it never really mattered. We also never did revisions to any of the art because it was faster to just redo the whole element. It was the most fun I've ever had working on anything and I think you can kinda see that in the final product.

How's the response been?

Jesse: I'd say it's been pretty positive. our initial costs are handled and people seem to be really enjoying the game. What's extra cool about the game is that it became a cooperative one between parents and their kids, we never planned anything like that and it just happened really organically.

What are future plans for the IP?

Jesse: We are currently working on a super cool gauntlet mode with weekly leaderboards and maybe even a few new weapons. We are actually looking into carrying the Shellrazer universe into a few different games, it's so much fun to draw in that universe with such goofy rules I believe we could come up with some really cool stuff.

What you like about iOS as a platform, and what could it do better?

Jesse: I don't know too much about implementation or technical elements so I'll steer clear of those. What I really like about the platform is that my art can actually live there out in the open. People who tackle art in a stylized way like myself tend to have a tricky time doing exactly what they want and making a living from it.

Nick: I really dig the iOS platform. It's basically like programming for a console: if it works on one, it works on all. I think the iOS platform could improve on the discoverability of apps in the Appstore. It's very hard to get noticed in the flood of games being released on the platform. 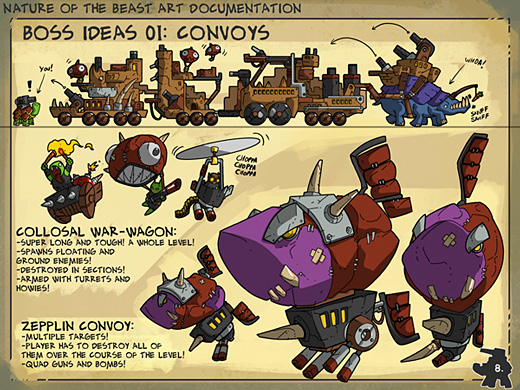 Jesse: My favorite artist in games has always been Dan Paladin over at Behemoth. I pretty much wanted to get into games because of that guy, and he's always been a huge inspiration to me. I've been lucky enough to meet the guy on a few occasions and his genuine personality, kindness, and skill is something that I've always wanted to aspire to.

If aliens landed on Earth and told you that they were going to eradicate corn, wheat, or rice and that you could only pick one to save from extinction, which grain would you save, and why?

Nick: I would ask the aliens to come over for a night of poker, and feed them Whiskey (corn), Beer (wheat) and Sake (rice), and see which one they have an explosive reaction to (alien immune systems can't possibly be resistant to all of these, floating in space for ages like that). Then I'd pick the crop required to make that drink. I'd prefer if their head would explode on beer. I like beer.

Jesse: So I gotta pick between spirits and beer? I guess there's food or something in the mix but man alive this is a tough one. I think when faced with a race with the technology to eradicate a specific grain I'd be a lot more comfortable drinking myself to death on some good ol' corn mash whiskey.

Infinite thanks to Jesse Turner and Nick Waanders of Slick Entertainment. Shellrazer is now available on the app store, so take a few moments and check it out. I guarantee it will be the neatest game with a gun-toting turtle you'll see this year!