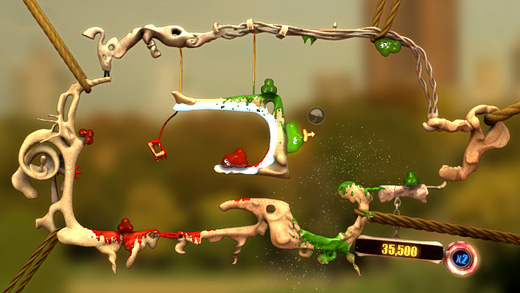 At PAX Prime 2011, one of the smaller indie-sized games that caught my eye was a strange, almost unclassifiable project called The Splatters, about shooting colored blobs around small arenas and exploding them at every opportunity. It was a blast to play even if it's a bit difficult to describe, and I'm quite pleased to share a brief interview with one of the developers, Niv Fisher of SpikySnail Games.

Thanks so much for talking with me, Niv. So, what can you tell us about SpikySnail? Who are you, what are your backgrounds, and how did you come up with the name?

SpikySnail is a new independent development studio located in Israel. It was founded by Sagi Koren and myself, but since the beginning we also had Alon Shama help iterate on the design. We all know each other from childhood so it was really fun and easy getting immediately to work. Daniel Ridner recently joined to help with coding which brings us to a total of 4 developers.

Being such a small studio means everybody needs to wear many hats, but 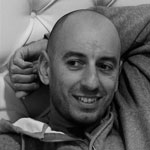 at the core I'm a programmer with over 12 years experience doing a variety of things. Sagi is a very creative graphics artist and totally set the tone of the game visually. We all have significant contributions to the game's design.

The name SpikySnail is just one of the names we threw around but really caught on quickly. It fits our culture very well, we'd like to be a little "extraordinary" and we also tend to do things more slowly, not because we're lazy or don't work fast—just because a lot of times if you're in a hurry the results suffer. But honestly the main criteria was we thought it had a nice ring to it and is unique enough to build a brand around.

Your game is called The Splatters. From screenshots, it's a little tough to tell what's happening. What's it all about?

Yes, it's hard to know from screenshots and it's also hard to explain in words. The Splatters is a physics based action/puzzle game where you play a group of semi-suicidal, liquid filled, creatures with one purpose in life—blow up with style. The objectives of the game are very simple, you must clear out all the bombs from each stage using the Splatters you're given to use by splatting them in various ways. When the Splatters explode their liquid internals are spread and when that liquid hits a bomb it ignites. It sounds simple enough but it really is a quite challenging game.

The uniqueness of the game comes from its use of physics. We took a fairly complicated elastic/liquid physics model and designed gameplay mechanics around that system. The idea was to create a really vast possibility space for things to happen. But instead of going towards a puzzle direction, where you try various shots and directions until the physics simulation does something that works (ala Angry Birds) we wanted it to be a skill game, so we added a lot of real-time controls that you can use to manipulate the simulation as it unfolds. Of course the player is not aware of the ways he's manipulating physics, he is playing The Splatters and hopefully gets really good at it too!

When you gain some confidence with controlling the splatters you can start injecting style into your act. See, splatters have a very short life expectancy and figured their true calling in life is to put on the most spectacular splatter shows. So instead of clearing the stage in the most "safe" or "straightforward" way you need to get creative in the way you use the environment and the controls your are given. There are over 10 different stunts you can pull with your splatters each one is unique and each one will boost your show and your score. I'll give you a few examples to understand: If you impale your Splatter onto some spikes he immediately splats and when the liquid drips from the spikes onto the bombs you'll get what we call the "Rainy Day" stunt. If you ride a curly slippery part of the stage you get a "Slide" stunt. Or if you launch your Splatter into mid air slam him from there you get the "Air Strike" stunt.

The interesting bit here is that stunts combine in any conceivable way, so if you find that a certain slide leads you to some spikes that happen to be above some bombs. You can slam into that slide doing a "Slide" + "Rainy Day" combo. If you have enough skill you can try to "Air Strike" into that slide and generate a 3-way combo. But it's totally up to you to figure out what combos work on any given stage and we hope players will find combos we never thought about (actually, that already happened at PAX).

At PAX, you mentioned that you had learned your programming skills making medical simulators. That's pretty unusual… How did that inform your design of The Splatters?

Most of my previous experience programming was done at a company called Simbionix where we developed 3D realtime surgery simulations for physician training. Sounds a bit dull compared to video games but actually has a lot in common on the tech side of things. Some of the algorithms we used there were quite unique and not often found in video games, there are very few video games that use elastic physics (or liquid physics) as a core game mechanic. There is reason for that, those systems are hard to stabilize and therefor risky if you want to count on them for actual gameplay, as opposed to using them merely as a visual effect.

So given I had all that experience I thought we could design a really cool game with those types of systems. It took us over a full year of design and iteration just to figure out how to do that, we wanted to deliver a game that is both fun, challenging and interesting and that is no easy task!

I think the result is quite extraordinary, basically we wanted players to feel their playing something unlike anything else—and I think we achieved that. I only hope people also see how deep and interesting this game can get and not dismiss it as a "casual-angry-birds-with-liquids", cuz it's definitely not that—which is also why were putting this onto XBLA, we want those hardcore gamers that enjoy a good game of skill, like Trials HD or even Pinball FX. We like to call our genre "Casual Extreme", because it combines the accessibility and relative simplicity of so called "casual games" with a mechanic that allows for very skillful play where you can keep getting better at the game even after 20 hours of playing it.

Infinte thanks to Niv Fisher and the rest of SpikySnail Games for taking the time to talk with me. For more info, check them out at their website, and be sure to keep an eye out for The Splatters, hitting XBLA in early 2012!