Although the New Xbox Experience is slowly growing on me, the best thing about making the transition was being greeted with an instantly-addicting new Arcade game making use of Microsoft’s avatars: A Kingdom for Keflings. Developer NinjaBee's Steve Taylor (company owner) and Kevin Heap (lead programmer on A Kingdom for Keflings) were gracious enough to spend a few minutes talking to me about Keflings and their other titles. 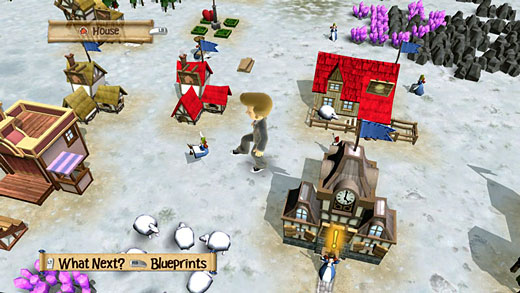 What can you tell me about the background and experience of the team who came up with Keflings?

Steve Taylor: The original concept was mostly developed by a programmer, an artist, and a designer, all of whom have been making games for a really long time and wanted to try something a little off the beaten path. Brent (the artist) and I developed a rough game-in-a-day prototype and then the concept was almost entirely reworked, with Jeremy (the designer) adding the idea for controlling the game with an avatar-type character. The full design and production after that was done by the NinjaBee team, and everyone had the chance to contribute ideas and influence the way things worked, with certain people (the lead designer, team lead, and lead programmer) bearing the final responsibility for the design.

The production team was anywhere from 3 to 12 people, depending on the stage of development, and included programmers, designers, artists, composers, management, QA, etc. As far as experience level goes, it was a real mix. Some of us have been working in video games for 12 or 13 years, some for less than a year.

Was A Kingdom for Keflings originally conceived as a game on its own, or was it commissioned specifically to help launch the NXE avatars?

Kevin Heap: It was definitely conceived as a game on its own, long before we even knew about the NXE Avatars. We actually completely finished the game without the Avatars before adding in the NXE Avatar support. 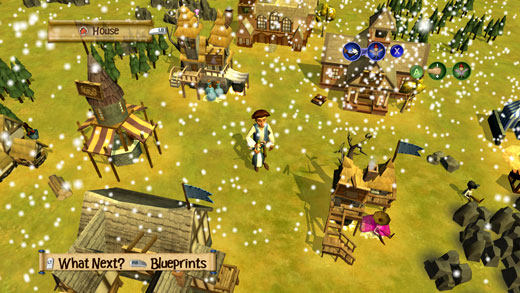 A game without any negative repercussions for player actions as well as total omission of any external negative forces such as enemies or natural disasters is a very rare thing, and in my opinion, it was a great success in this example. Was this always the intended form of the game, or were there some elements or circumstances during development that led you to this conclusion?

KH: We definitely discussed having enemies, natural disasters, alien invasions, etc. very early-on in the planning stages of the game. As we played the game in the early stages of development without that stuff it became clear that the game was fun without it. We really wanted to focus on making the core gameplay rewarding and to not distract the player with other things that would remove them from what was really fun already. We also wanted the game to have a unique feel. While it's fun to go to war and blow things up, it feels like that's what most games are about. We wanted to take a step back and let players relax and just—play.

What has reaction been to Keflings, specifically the unusually pacifist nature of play? Additionally, do you have any way of telling what percentage of people play with their avatars, and which use the stock characters?

KH: The reaction has been overwhelmingly positive on this note. We occasionally get criticism about it but it seems that for every complaint we get 4 or 5 positive remarks thanking us for making a game that everyone in the family enjoys and that is so compelling and addicting.

While we don't have any specific way of telling the percentage of stock vs. NXE avatar usage people seem to almost exclusively use their NXE avatar—at least in online play. And asking around, I can't name one person who isn't using their NXE avatar (myself included) in their game right now. 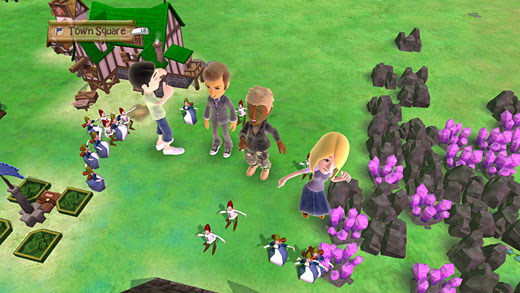 Making players choose between one of two branches and closing the unselected one off forever threw the completionist in me into a small panic. Was the decision to do that simply to encourage players to start a brand-new game and choose the other path?

KH: We wanted to allow the player some choice in their building path and we also did it to add some replayability to the game. Most people seem to want to play through the game a second time (at LEAST) and so it adds a bit of variety to that experience—besides the complete restructuring most players will give their towns after learning a few tricks from their first play-through!

The land in the game can get quite crowded at times. Why was the decision made to keep every type of workshop necessary until the end?

ST: The basic idea was that once you had built and stocked a workshop we didn't want it to be wasted—if you had to keep tearing down old workshops and taking out all the resources you'd stocked them with, it would feel like that particular workshop was less valuable. And, I admit, I was reacting a bit to something I didn't like in Outpost Kaloki, where it was to your advantage to building something and then immediately tear it down. It felt like destruction was as common in that game as construction, and that's not the feeling we wanted for this game, so we pushed in a different direction.

Finally, we liked the visual concept of a bunch of Keflings walking around in a big spiderwebby pattern to a bunch of buildings, rather than always streaming to and from one building. That said, I can see it as mostly a personal choice.

If the little people are called Keflings, what is the proper term for the giant?

KH: There isn't really an "official" term for the giant. When we designed and built the game, we just called them giants, and when you choose a giant in the game that's the word that's used. We have since been contacted by the Federal Association for Respecting the Tall, and they've informed us that any future use of the derogatory term "giant" will force them to begin legal action against us, and the correct term is "vertically enhanced person." 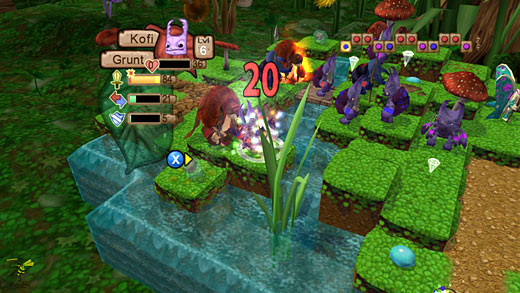 To date, which of your games has been the most successful on XBLA, and why would you say that is? Was there one you felt should have done better than it did?

KH: I would definitely have to call Keflings our most successful title to date. It feels like each game we make gets better as we learn from past mistakes and build on past successes. In addition, this has personally been the most rewarding and fun title to work on and it's awesome to see my wife pick it up and play it like I've never seen her play a video game before.

I really wish Band of Bugs had done better than it did. We put a huge amount of effort into it and absolutely packed it full of features (a level editor and a bunch of different gameplay modes in both local and online play and some awesome DLC) but it seems like most people just didn't try it. The trial experience is a bit weak and that doesn't help. We have many a NinjaBee here that claim Band of Bugs as their favorite game but the public just didn't seem to eat up the idea of playing as little bugs.

Cloning Clyde was, and still is one of my favorite games on XBLA, and Band of Bugs got lots of playtime at my house as well. Are there any upcoming plans for more DLC for either of these games? What about Keflings?

ST: There are no plans for DLC in Cloning Clyde. There's potential for more DLC in Outpost Kaloki and Band of Bugs (check out the extensive DLC already there!), and there's some DLC in the works for A Kingdom for Keflings, but it's nothing flashy. 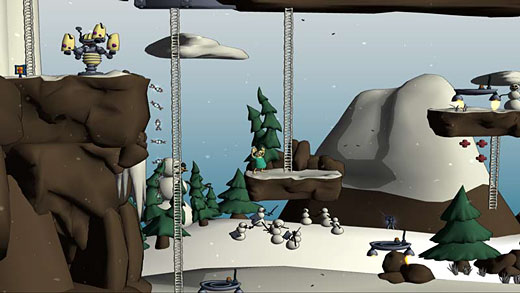 Boingz recently launched on Nintendo's WiiWare service. Any plans to bring the game to XBLA?

ST: We'd love to expand the reach of Boingz. Boingz was developed in cooperation with RealArcade, so future plans for Boingz depend a bit on what Real and NinjaBee decide to do together.

Infinite thanks to Steve Taylor and Kevin Heap of NinjaBee—and if you haven't already given A Kingdom for Keflings (or their other great titles on XBLA) a try, you're really missing out.

“Federal Association for Respecting the Tall”? If you take the first capital letter of that organization’s name, it spells something naughty. I wonder if he knew tha… 🙂