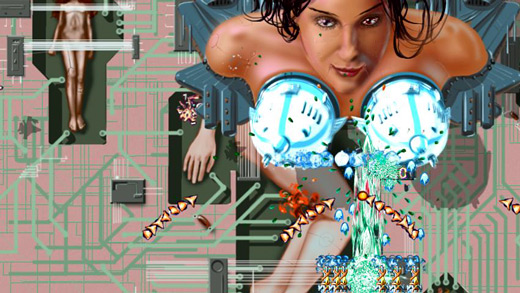 For those of you who've (still) been paying attention, a great little game called Weapon of Choice hit the Xbox 360's Indie Games area a while ago, and quickly became one of my favorites on the system. It should be one of your favorites, too—it was great stuff, and well-done. Following such an energetic title can't have been easy, but developer Mommy's Best Games and its mastermind Nathan Fouts have come up with not one, but two projects. Let's talk.

Hey Nathan, thanks for speaking with me. It's been a while since we last chatted… Can you fill us in on how things have been going at MBG since Weapon of Choice launched?

Once Weapon of Choice finished up (I want to say "shipped" but with digital that's not really applicable any more) I went into "marketing mode". That took about a month and a half to follow up on interviews, and opportunities, and the holidays took some time as well.

After that, it was time to dig into the BIG BOOK and find out which hopefully amazing idea I needed to make next. After rejecting, or rather filing for later some fairly cool ideas, I decided "buggy with interchangeable grappling hooks" was the best fit at the time.

For the last few months, the game I've been looking forward to hearing more from you about has been Grapple Buggy. How is progress there?

Metaphorically, over a few months I got Grapple Buggy revved up and producing a satisfying roaring sound, but there were still a few clinks and clunks to be heard as the engine idled. It still needs some tuning there, and some rapping with the comically-sized wrench here.

Right now, it's in the shop, with some of its vital parts strewn about the floor. But the good news is this is all for a tighter driving experience in the future!

Grapple Buggy aside, I have to admit I was a little surprised to find out that you had a second project in the works—and a shmup, no less! At this point, it's been released and is available on Xbox Live Indie for the incredible price of $1.00. What else can you tell us about it?

Shoot 1UP is not only for shmup fans longing for a new variation on our treasured classics, but also for normal action gamers who feel side-lined by the ridiculous maneuvers required in recent bullet-hell style games.

As you collect 1UPs, you gain new ships immediately, and while you do have to control a large phalanx of fighters, you also wield greater fire-power. There's the "plasma auger" which forms once you spread your ships far enough apart, and there's a temporary, bullet-clearing shield you can produce at any time you're in for too-tight of a squeeze.  If you do happen to get hit, each player ship detonates in an enormous explosion which wipes enemy shots, but also damages nearby attackers.

The game features "Chilled" mode which is great for just taking it easy, and for non-shmuppers to enjoy (I've had a lot of playtesters claim they weren't into shoot ‘em ups but were able to have fun with this mode).

Harder campaign difficulties are available too, as well as the new "ScoreHore" mode. This allows you to play through the game continuously, building ship stats such as shield power, and increasing your score multiplier max. ScoreHore saves your progress including the last loop and area number, so you can quit or even die and come back where you left off.

With your studio being on the smaller side, how do you have the time and resources to work on two different projects simultaneously? Are you using the mountain of cash you've accumulated from XBLI sales to fund your new development empire?

Bahahaa…. Yeah, mountains of coins and they're all mine!

Honestly we've done okay compared to most of the Indie Games devs, but there are definitely some other higher grossers out there. It just goes to show if you find a new market not being served, you can definitely carve out a nice niche! 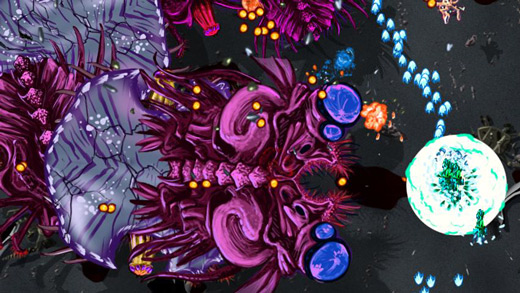 As for Mommy's Best, it's a careful balance of family life and work. You can read about big developments on our company blog, and small achievements by following us on Twitter (@MommysBestGames).

I'm really excited about Grapple Buggy and its potential, and I'd like it to have the proper time to breathe and grow. Shoot 1UP came about from taking time off and playing lots of shoot ‘em ups in the meantime, and finding inspiration in the Experimental Gameplay Project.

With two projects in the works, are you making them both available on XBLI exclusively, or will you be hitting Sony and Nintendo as well?

It's a good, straight-forward environment to see how things do on Microsoft's console before spending the time porting them. For now they'll stay on the 360, but PC versions (limited by testing/compatibility issues) may be in the future.

One last question, who are your intended audiences for each of your current titles? Are there certain segments of game-dom you're shooting for? Additionally, what would you say to "sell" each of these titles to the people you think would enjoy them the most?

I'm fighting for the gamer dads and … dadesses, or, "moms" as some call them. I'm specifically looking at gamers without tons of time that are ready to jump into an old-school adventure with great art, and interesting, new gameplay twists.

Don't squander your time on overly-long-tutorials and mind-numbing fetch quests. Lay your kids to bed and come play something new and interesting for a bit then go to sleep happy!

So there you have it… Infinite thanks to Nathan and Mommy's Best. Be sure to check out Shoot 1Up NOW available on Xbox Live Indie, download Weapon of Choice if you haven't already (Seriously? You haven't yet?) and keep eyes peeled for Grapple Buggy, coming soon.