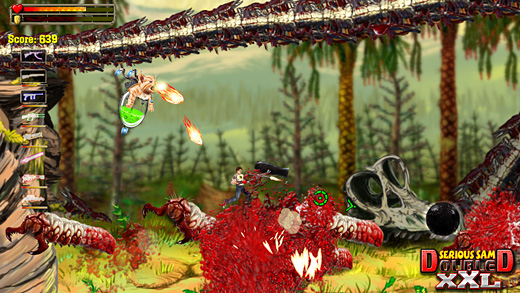 Not only am I in love with the actual title of the game (so sexay!) it's something of a spiritual successor to one of my favorite Xbox Live Indie (XBLI) jams ever, Weapon of Choice.

The big cheese of Mommy's Best Games, Nathan Fouts, explains everything anyone needs to know about XXL, and a few other topics came up, to boot. Apart from the noogie he gave me (it still smarts!) the interview went rather well. Here's the scoop…

Hey Nathan! Thanks for chatting with me. The best place to start, I think, would be to ask you:

What do people need to know about XXL?

I think it's important to know that it's basically a new game. It's not a sequel to the original Serious Sam Double D, but you could call it a version 1.5. It's the way the game should have been if we'd had proper time initially, but we had certain time restrictions.

There's a ton of new stuff, like 2-player co-op and the gun upgrades (40 total guns now, with just 8 before). So as soon as you have all this new firepower, we worked to actually fit it into the design of the levels rather than just tack it on. It's pretty broad with all the upgrades, but we restrict your initial purchases for a while to help ease you in to all the options.

Then there's the level changes and completely new vehicle levels for the campaign. Co-op play actually spawned the 'head to head arenas' which weren't even originally planned, but once we had co-op and all these guns, it seemed only right to offer a competitive option in addition to the cooperative campaign.

That's the most important stuff… then there's the little things like a ton of customization (which is classic for a Serious Sam game) that we felt was important to maintain. Not just for the game, but to help ensure more people get to enjoy it. 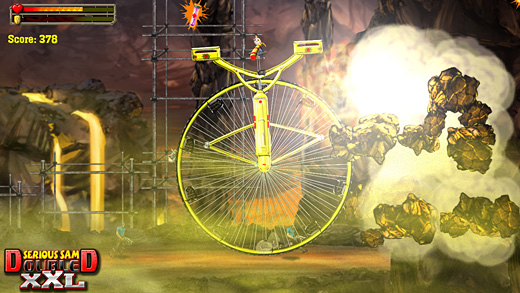 So Nathan, you announced a title called Grapple Buggy quite a while ago, but it never materialized. I recall seeing some art and unless my memory deceives me, I thought there were even brief snippets of gameplay. I was really looking forward to it back then, and was disappointed that it's still MIA.  Any Updates on that?

Basically we want to do the game right. I've had two false starts, both for many months at a time. Each time it looked great and got far, but funds were drying up and there was still a lot of game to make. We had to switch over to other, small projects to bring in income.

And, I hope this isn't too pretentious, but my design keeps changing. As an artist I continue to change and evolve, and my interests shift. I get influenced by life, by other art. In the off-production time, the design just keeps evolving.

I want to ensure it does some interesting things that haven't been seen before. I'd definitely like to finish it, but we need to get secure enough for a long, long stretch of development.

Fair enough, and I respect that.  Otherwise, what've you've been doing since Double D came out? Has working on XXL been taking up all of your time, or do you have anything else in the works?

Serious Sam Double D launched at the end of August in 2011. After that we spent some time promoting the game, which probably doesn't sound hard, but is surprisingly involved. After that, I took a little break visiting some relatives in the Sunshine state.

Around November Microsoft put out the newest dashboard update which crushingly buried XBLIG and had so many new advertisements, it was a wonder you could find any games. With a purpose to effect change, I created Game Type in a few days and put it up on XBLIG. Whether or not we caused the change, MS did update the dashboard later to both XBLIG's and XBLA's benefit with more sensible arrangements and imagery. 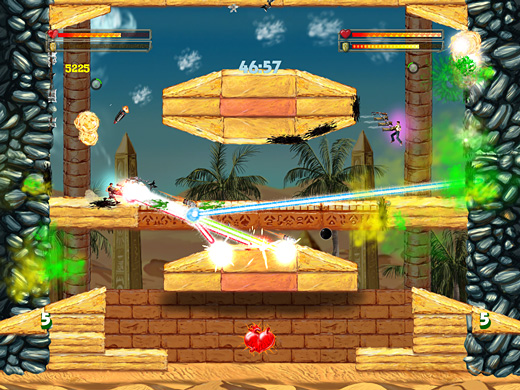 Then in December 2011, I took the month to get Serious Sam Double D running on the Xbox 360 as a test. At the end I had the game running via XNA, but man-oh-man was it slow! But it was finally running with load times around 4 minutes, and framerate something like 4 frames a second! It was an unplayable mess, but it did not actually *crash* on the Xbox, so that was a start. Thankfully now in the final versions the framerate is frequently 60.

I spent January making another small, experimental game for a cool contest held by the Experimental Gameplay Project which let players run their games with five giant floor buttons. We entered the contest (it was called Porkerpillar) and won second place!

We worked on Serious Sam from February 2012 till December. Along the way we started with "straight port", and then we added co-op, then we added 400% more *new* weapons, added vehicles, enemies and more! I knew if we had a chance with a game on XBLA, a straight port was not enough!

A different game (Serious Sam BFE) came out already on XBLA, but Devolver was happy with us making XXL as great as possible, thus the development time extension. I wanted take our little 'marketing game' and make it great all on its own terms. Even if you hadn't played a Sam game before, if you liked guns and side-scrollers, my goal was to make something really fun for you.

Sounds like you had your hands full there! So what's coming up for Mommy's Best Games now?

Serious Sam: Double D—XXL came out February 20th on XBLA, so we're doing everything we can to let people know.

After that, we're throwing a party!

Yup, March 1st, here in Louisville Kentucky we're organizing the first big gathering of indie game developers in the Kentucky/Indiana area, and we're showing our games to the public! It's called "Shave and Haircut, 8bit", takes place in a really hip barber shop, and will have a variety of new games for play. 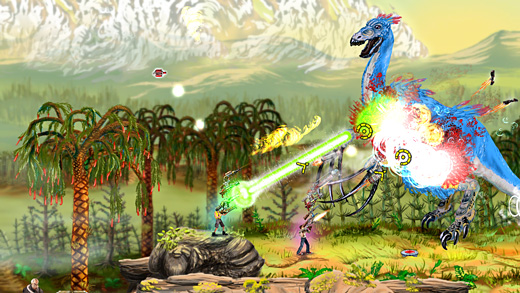 From there it's off to PAX East, letting more gamers play Serious Sam: Double D—XXL since it will have been out for a few weeks.

As for the next game, we're currently developing a 4-player thing for the Ouya console. It's called Pig Eat Ball and is already turning out to be a blast. The controls are simple – players fly their pig around with one stick, and boost fast with a single button. That's it. The game involves them trying to eat balls to grow in size and match the goal size to win the match, but they can also boost into each other to get their friends to spit out balls. It becomes a balance of eating as fast as you can, while trying to thwart your friends.

That's our next small game, and from there, I have a few bigger projects in mind, but I'm still getting my notes together!

Excellent stuff. So, enough about your games… let's talk about games from other people! Specifically, what was topping your list last year?

Hmm, I've played several good ones, but let's seeeee.. The best ones in no order:

…And sorry for some of these not coming from 2012, my backlog is embarrassing!

Infinite thanks to Nathan Fouts and Mommy's Best Games for their time and attention. For more information on what these folks are doing, you can check out their website, and tell them that I sent you. Otherwise, if you've got an Xbox 360 you can download Serious Sam: Double D—XXL right this very minute and find out what the madness of gun-stacking is all about!