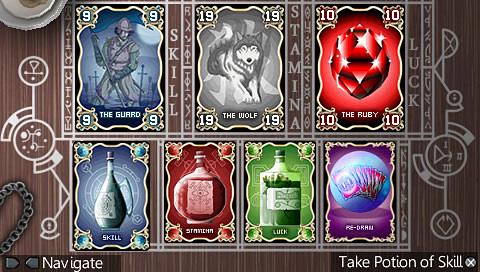 Regular readers may recall that I've mentioned the Fighting Fantasy games a few times, and I'm a really big fan. At the moment there are two titles available for download for PlayStation Portable (PSP) on Sony's PSN service: Fighting Fantasy: Talisman of Death, and Fighting Fantasy: The Warlock of Firetop Mountain.

(Sadly, these titles are not yet available for PS Vita.)

In any event, for those who aren't familiar with these titles, they are based on a series of books written by the co-founders of Games Workshop back in the 80's. Although I had never personally seen these books, apparently they're quite similar in nature to the famous Choose Your Own Adventure novels with an added element of role-playing stats and combat.

As someone who grew up loving the Choose Your Own Adventure paperbacks, finding titles to play on my PSP that were essentially the same thing blew my mind—rather than turning the concepts into a clunky platformer or simplistic action game, the good people at Laughing Jackal translated the books themselves into text-based adventures with short minigames replacing the dice-rolling and combat that real-life readers would have performed.

For people who aren't afraid of a little text and using their imaginations, it's fantastic stuff. I reached out to Ross Brierley, Community Manager of Laughing Jackal, and he was kind enough to take a few moments out of his day to answer some questions about the Fighting Fantasy games and what Laughing Jackal is doing now.

Here's what he had to say.

Thanks so much for speaking with me, Ross. To start with, how did the idea of making PSP games based on reading come about?

When Laughing Jackal first started developing its own games, one of the early ideas which was put forward was to do something along the lines of the adventure gamebooks, but on DS. With the two screens and the ability to hold it like a book, it seemed a very good fit. Plus, there was the added benefit of the development being fairly straightforward so we thought that it would be a great starting point to help us find our feet as a developer.

However with the success of our first PlayStation Mini, Cubixx, we decided to concentrate on that platform and we put the gamebook idea on hold. The idea stayed in the forefront of our minds and when the opportunity came to port Steve Jackson and Ian Livingstone's Fighting Fantasy series to PSN it seemed too great an opportunity to miss.

Now that the games have been out for a while, how has the response been? Have people been confused after purchase, or are the fans mostly those who remember the books?

The reaction so far has been really positive.

Last month Warlock Of Firetop Mountain was the highest user rated Mini on the European PlayStation Store with a mighty rating of 4.76 out of 5. While we've had a few reviewers who weren't so keen on the heavily text based nature of the games, most people seemed to understand what we were trying to achieve and liked how faithful we have been to the original books. We've received particularly positive comments in relation to the few innovations that we've added such as the new optional combat system and the log book.

The impression I get is that most of the fans of our adaptations enjoyed the original paperback series (like I did) and appreciate how faithful we have been to the books' gaming system. We also get quite a few comments and messages from people thanking us for introducing them to the world of Fighting Fantasy books which is really very satisfying. We always set out to try and develop the books into console games in such a way as to appeal to new and seasoned gamers alike, and I would say that on the whole we've been pretty successful.

Since the Fighting Fantasy games are mostly text and simple drawings aside from the minigames, how many people does it take to create one?

There's usually a team of 10 of us who work on the adaptations throughout the course of development. Obviously with games from the Fighting Fantasy series, the art and in programming take up the lion's share of the workload and they're handled by our artist Jake Cooper and our programmer Paul Carpenter. The rest of us handle everything else in terms of production, submissions, testing and proof reading and so forth.

After devouring both titles available now, I'm desperate for more… are there any plans for additional installments, or what can other Fighting Fantasy PSP fans like myself expect in the future?

We're currently very busy with several other projects at the moment including a new unannounced PS3 game and a port of one of our more recent Minis to the iPhone but we would like to come back to the series when we get time. We've already earmarked Fighting Fantasy: The Forest of Doom as the next book that we'd like to get our teeth into but of course our development plans will depend on the continued sales of Warlock of Firetop Mountain and Talisman of Death which, incidentally we are releasing as a bundle pack on the European PSN Store, which should be available now.

Infinite thanks to Ross Brierley for taking the time to speak with me, and my most heartfelt appreciation to Laughing Jackal for providing me with an intensely enjoyable trip down memory lane. However, they do more than the Fighting Fantasy titles. Their other titles available on PS3/PSN/PSP include Cubixx HD, OMG-Z, Orbit, and some commissioned work for several titles from the Shin Megami Tensei series in addition to others. Their most recent offering is Hungry Giraffe, a brand-new PS Mini title.