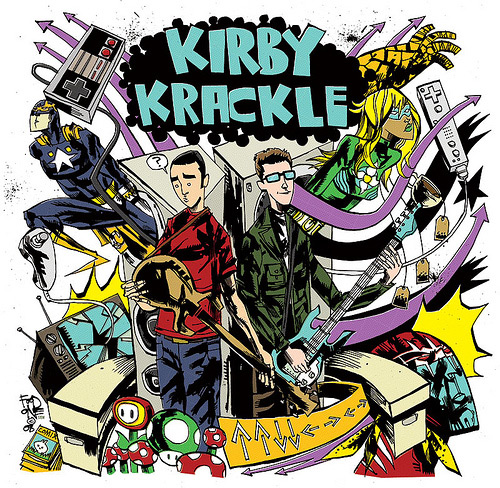 Every self-proclaimed geek worth his salt thrives on these things, so put them all together and the result has to be something fantastic, right?

Kirby Krackle is a local Seattle-area band with one album under their belt, and another on the way. Absolute up-and-comers to watch, their tune-filled mash-ups of popular culture are smart, sassy, and absolutely on-point. They also prove my hypothesis to be true.

If you haven't heard any of their songs, pop on over to their site and listen to the entirety of their first album—for free. (Of course, after you listen to it, pony up the money and pay for the whole thing… it's absolutely worth it.)

The courageous men of Kirby Krackle were gracious enough to take the time to answer a few questions for me, so without further delay—here's what they had to say.

Jim Demonakos: We're a Nerd Rock band based in Seattle. There's two of us, myself and Kyle Stevens.

What is Kirby Krackle all about? What's your mission?

Kyle Stevens: Kirby Krackle is music for you. We got together to make songs about all the stuff we loved in pop culture, specifically comic books, video games, girls and generally things that are awesome. We're both fans AND songwriters, and like other fans, we really enjoy the
human element to comics and what metaphors are used; whether it be super powers or crazy situations and how they relate to everyone's everyday experience. As songwriters, our job is to take that and turn it back to the people in the same way. Our mission is to take the human element of the comics we love and send it back with the same amount of enthusiasm as the stories we write about give us.

As you said yourself above, Kirby Krackle is most often described as "Nerd Rock". Why do you think that fits?

JD: Yeah, that's the label we put on ourselves, so I think it fits quite aptly. We make songs, real, true rock & pop songs, but with lyrics that are all about our interests, which are things a lot of people are in to. 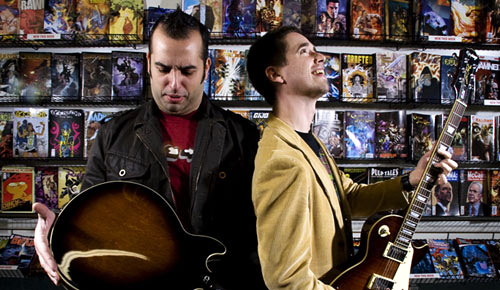 How did the two of you guys get together?

JD: Kyle's a comic book fan, which is how we met, I own some stores in Seattle and he's a customer, so we'd always talk both music and comics. At some point, both of us lamented the fact that there were really no good comic book songs out there and figured we had enough nerd knowledge between the two of us to make something happen.

KS: Yeah, we're both idea guys in the fact that we think what is something that has never been done that we would freak out about if it came around. We have the best time simply just making the songs and sitting around trying to find the funniest rhymes we can and the most inappropriate as well. People would probably be a little disturbed and offended if they could actually sit and listen in on our writing sessions.

For those who may not know the term, can you explain where you got your name and what it means? Also, what were your runner-ups?

JD: Kirby Krackle is the name of the "dots" that Jack Kirby drew on all his art, specifically from his legendary run on Fantastic Four, to signify things like energy or bursts of power.

KS: Ever since Jim's business partner, Brian, came up with the KK name and since he did it early on, that's really been the only option. That's surprising, because usually the naming process is living hell and no one is fully happy with the the compromised result. "Kirby Krackle" just rolls off the tounge and now that I think about it's weird it was that easy.

JD: I guess we could make something up to sound interesting? Ok, we were first called "Mutant Camel" (the classic 1983 atari game (yes, it's a real game!)).

JD: Then we tried "Badrock and the Rockettes," but realized we had no ladies in the band.

KS: Yeah, that's true. After we nixed "The Quinjets" we settled on "Kirby Krackle"

In your creative process, who does what? Is it pretty much that one of you does the music and the other lyrics, or is it more collaborative than that?

JD: It's definitely more collaborative, we pretty equally write the lyrics, I man the computer and sit in front of Word, while Kyle has his guitar, and we go back and forth over every little bit of song, playing every little bit so that the huge amount of lyrics that we cram in to each song can fit.

KS: Its a good melding of each of our own strengths, Jim as an editor/comic industry pro and my many years of songwriting/recording experience form a geek-tastic VOLTRON that we hope people feel they can invite into their homes. Besides the broken ceilings obviously. 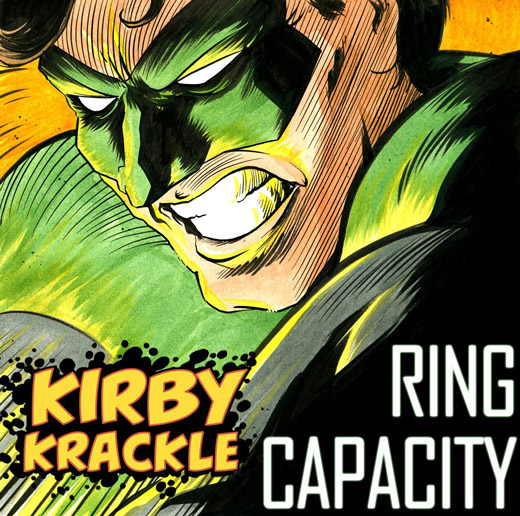 On your first album, there is a very sweet, tender song that I had a very strong emotional response to. Can you tell me a little bit more about "Teabagged" and where it came from?

KS: Well, it really comes from us not being very good at Halo. Since I'm no Halo master, getting teabagged happens to me often. Also because I am no Halo master, this means that many times I have to do this to others who I finally kill to make me feel better. As you can see, it's a vicious circle of disfunction that needed to be documented in song. I love also how some people get so angry about it and find that really fascinating. As with "Zombie Apocalypse" the only way it could be interpreted is via ukulele and steel drums. I laugh every time someone hears it for the first time and look at us like we're freaking crazy…

On "Marvelous Girls", you work in a fantastic number of shout-outs, but were there other ladies you wanted to include but didn't? And what about girls from other comic houses? They need love too, don't they? (And whoever added in the line about the Skrull-girl's chin is SICK.)

JD: Yeah, we could have gone on forever with that song, we narrowed it down to ones we thought would have funny follow-ups, like the Genoshan Girl and how her island was blown up. There were definitely a whole lot of girls left out of this one, but we've rectified that to an extent with our new song, "Roll Over," which includes another crazy amount of shout-outs.

You guys do a great job of covering both comics and games in your songs. It's screamingly obvious that you guys are both the real deal in terms of fandom, so what are some of your favorite titles from both pastimes?

JD: From games, recently been playing Fallout 3 (still), dipping my toe in to Modern Warfare 2 and Assassin's Creed II, playing Marvel Ultimate Alliance and Batman: Arkham Asylum (of course, comic games!), playing New Super Mario Bros. Wii with my girlfriend (that co-op can be really frustrating! :), also looking forward to BioShock 2. Plus, I like casual games for when I need to just kill a few minutes, like PopCap's Peggle or things like Castle Crashers. Also, just downloaded Marvel vs. Capcom 2, so putting in a bit of time with that as well.

On the comics end, too many to list, though I'm lovin' anything Johns touches over at DC, especially Blackest Night. Looking forward to Siege at Marvel, lovin' Remender and Aaron's respective Punisher books there as well. Invincible, Chew, Walking Dead, Deadpool, Blade of the Immortal, Usagi Yojimbo, I could go on forever. I read a lot of comics. 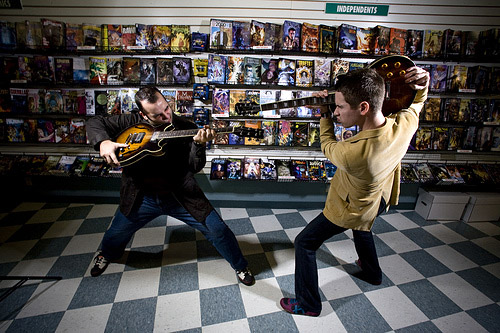 Comic-wise, I'm a huge fan of The Walking Dead by Robert Kirkman. Best zombie comic out there, period. I also couldn't be more excited that they're making it in to a TV series, it really depends on who they cast as Rick, but I know I'll be there. I'm also a big X-Men fan, so I read pretty much all the X-books, and I'm really enjoying Green Lantern over at DC as well.

So you guys are back in the studio as we speak. How's that going?

KS: I'm actually answering these questions between studio sessions. Recording is going great, and we hope this album excites our fanbase in a new way while at the same time reaching the rest of the world who doesn't know about us yet. If you like the direction that the new songs, like RING CAPACITY and GOING HOME were taking, you'll love the album. We're looking at mid-March release.

Open mic. Do you have anything else outside of the band to plug, anything else you want us to know? This is Kirby Krackle's chance to be heard. Let us have it.

JD: The only thing I have to plug is the Emerald City ComiCon, the comic book & pop culture convention I run in Seattle coming up March 13-14, 2010 – KK will be there manning a table as well as performing and the show will have a bevy of cool comic guys, media guests and more.

KS: If you like our songs I also have another few releases I've put out in the past year on iTunes. My solo album is called "Songs From The Orange Room" and a short lived project called COLLIDER (self-titled) is on there as well. Personally, I can't wait for the 2010 con season and the awesomeness we both feel it's gonna bring. See you out there!

Infinite thanks to Jim Demonakos and Kyle Stevens for taking the time, and keep an eye out for their upcoming album titled "E for Everyone". After hearing a little snippet of it, I can say that it's going to be just as killer as their first. For more information on this next set, check in with Kirby Krackle at their website.

E is for Everyone. Great name for a second record that is begging to break out and get widespread air. These guys need to work with DC or someone in media to laydown some soundtracks for movies. Ironman anyone? Or maybe Return of the Phantom? We all know that Seattle is the epicenter of All That Is Truth in Music, so adding Kirby Krackle as the #1 Geek Rock Band only makes sense.