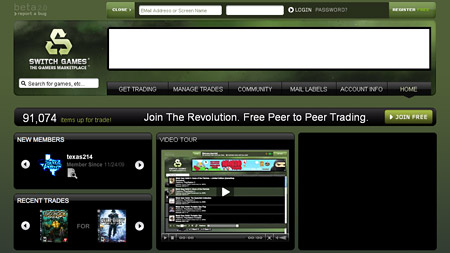 A while ago, a friend on Twitter recommended I check out SwitchGames, an online trading service for folks who want to get rid of the old in exchange for the new. Rather than messing around with tokens, credit, or trade points (I get enough of that nonstandard currency crap paying for DLC already, thanks) SwitchGames offers a 1-to-1 trading system—basically, a straight-across swap service that matches people up according to their wants.

Done with Borderlands and want Uncharted 2? There's a guy somewhere with Nathan Drake's latest adventure on hand waiting to take a trip into the dusty brown world of monotonous gun collecting. SwitchGames.com helps you find each other and then… trade get!

Although my initial experience using the service was a little on the rocky side thanks to a few bugs, the support staff was quick, courteous and efficient in addressing my concerns, getting the problem ironed out in a day or so. Since then, I've completed two trades with fellow used gamers across the country, and been totally satisfied with smooth transactions in both cases.

After personally using the service and really digging how it worked, I wanted to know just a bit more. To that end, the founder of SwitchGames, Jason Crawford, was good enough to take some time out of his day to share a few words with me.

SwitchGames.com is the world's largest peer to peer trading site for gamers. On SwitchGames, gamers finally have the tools and community to easily trade directly with each other, putting an end to unfair trade-in practices that have sadly become the norm in the industry. No trade-in values, no points, no waiting cues, no subscription fees, etc., SwitchGames.com is truly free to join and free to use. We offer optional—and I stress the word optional—services that make trading easier, safer and faster. SwitchGames is social marketplace unlike anything else built before.

[Note: the optional service referred to is basically a prepaid postage/insurance option that reimburses a person in the event that their game is lost, or the person they're trading with ends up being dishonest. Very reasonably priced.]

We're a group of nerds that love video games but hate getting ripped off. We want to disrupt the industry and change things for the better. I was in game development for about 6 years before putting all my savings and time into SwitchGames. Before that, I did web development stuff. My partner Kai had a cushy gig working in business development and strategy before I talked him into joining me in the crazy world of SwitchGames. Our staff is comprised of the smartest, coolest, most dedicated group of people I have ever worked with. We're all deeply committed to the SwitchGames cause and we're all active users on SwitchGames. None of us have made a trip to GameStop since we launched.

How did Switchgames get started?

Back in 2003 I put up a quick and dirty version of SwitchGames, which was actually the very first site of its kind. You could put stuff on your wishlist, show off what you owned, and we even had a very primitive version of SwitchBot. [The feature that does the auto-matching between traders.]

The site didn't work so well after we reached around 3,000 users because it was really meant for me and my friends to trade games with people we didn't know. We never advertised or anything, it just sort of caught on through word of mouth. I spent several years doing video game development, which doesn't leave any time for anything else in life, but I never stopped listening to member feedback or putting designs together for what SwitchGames would be when I could work on it full time.

Why is Switchgames better than comparable online trading/exchange sites?

Somehow the word "trading" has become synonymous with "trade-ins" and SwitchGames is putting a stop to that insanity. Too many sites offer a slight variation on the typical trade-in model and then call it "trading". These sites are NOT trading sites but trade-in sites running the same buy low / sell high racket that GameStop and other retail chains are doing. To really understand why SwitchGames is the best option out there, just sign up and start using it. There is no bigger, safer, easier, and quicker way to trade directly with other gamers online. Period. In less than a year we have over 80,000 items up for trade and thousands of gamers save tons of money trading on SwitchGames every day. We have made something truly empowering for gamers. If enough people start using SwitchGames, gamers will ultimately gain control of the used game market. I just love that idea… it's the way it should be.

Sincere thanks goes out to Jason Crawford and the rest of the SwitchGames crew for this quick Q and A, as well as for helping me plug some of the holes in my collection for what amounted to basically no money. GameStop just got a whole lot less appealing…