In case you weren't aware, the developers on Microsoft's Indie Games channel are in the middle of an Uprising.

Sick and tired of being drowned out by a flood of cash-in crapware, the people who take game-making seriously have banded together to release a slew of high-quality titles. One of the initial games available was the superb Epic Dungeon from Eyehook Games. Mike Muir, the man behind the magic, was gracious enough to take time out of his schedule to answer a few questions about his project.

If you haven't already bought and downloaded Epic Dungeon (it's one dollar! what are you waiting for?), then see what Mike has to say about skillfully traversing fifty floors of danger.

Hey Mike! Thanks for making such a great game, and for being willing to answer a few questions! For those that don't know, tell us about Eyehook. How many people are in the studio, who are you, and what's your background in gaming?

Hi, my name is Mike and I'm a one man shop, but, luckily, my friends and the XNA (Xbox Indie) community have provided me with an amazing amount of help and support through the process of creating Epic Dungeon. But, when it comes to the nuts and bolts, it all pretty much comes down to me.

I grew up playing arcade games, and I'm still an avid gamer. Although, I must say I haven't had much time over this past year! On the business side of things, I've been involved in software and technology for quite awhile now. I started off in the corporate world and then moved on to a few start-ups, before settling into making games.

It's been a long road, but this is what I really want to be doing. So, I'm really pleased with the response that Epic Dungeon has been getting and am looking forward to continuing work on it.

Epic Dungeon (to me) seems like a perfect blend of elements from Diablo, Gauntlet and the Roguelike genre… plus a whole lot of awesome. How would you describe it, and what should potential players know about it?

I think that sums it up better than I ever could. My focus has always been to make a game that I want to play, so Epic Dungeon is really a distilled version of my favorite things: crawling through dungeons, collecting ever-more powerful items, and defeating hordes of enemies.

One of the fantastic things about roguelikes is their random nature, which adds a lot of replayability. It really has to be fun for me to keep pushing me forward in development. Also, it's great fun seeing peoples' reactions to permanent death—maybe I'm sadistic. That level of tension and fear has been pretty much left behind in modern gaming, and I miss it. I still break into a sweat when I'm low on health potions, my lantern is running out, and there's no shop to be seen.

After finishing the game, it seems to me that the optimal build starts with the Berserker, and the other classes function better as supplemental abilities. Did you find that to be true also, or do you think each class is equally viable?

I feel that the Berserker is the most accessible character to play. His ability is comparatively easy to chain and can wipe out a lot of enemies, especially when combined with other skills. But, I've also found the tinkerer to be a good starting point. Exploding a level 10 orb can be pretty devastating. In terms of purely speed running the game, one of my fastest times was actually with the Gambler, but he definitely requires a bit of finesse to have constant trains of poisoned enemies. As for the shaman, his approach is a bit slower and more methodical. It really depends upon how you want to play.

I think once you beat Epic Dungeon it still offers a lot of different ways to play it. I've already seen a few posts challenging players to escape given different limitations. And hopefully, at some point in the future I'd love to add a conduct system for tracking these.

Is there an intentional decision in the programming that prevents Remove Curse scrolls from appearing for a LONG time if the player makes a rookie mistake (like I did) and gets cursed?

No. I'm not that cruel. Remove curse scrolls are rare by nature, but you can improve your chances of finding one by increasing your luck. Just always remember to identify before using equipment, and you'll be fine. 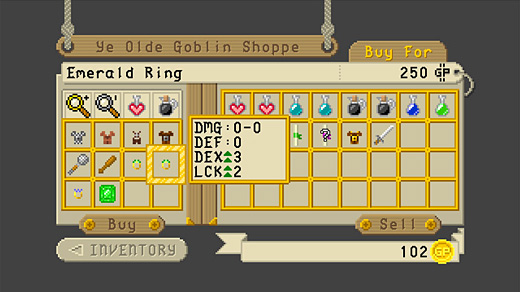 What's the deal with level 50? Wasn't that a bit extreme?

It's hard to discuss and remain spoiler free, but I definitely wanted it to be a culmination of the challenges that you have faced through the dungeon. I suspect you'll have an easier time on subsequent attempts. As an aside, I do have plans for a few, more interesting, changes. But, I can't really comment until I have solidified my plans.

How did you (and Epic Dungeon) get involved with the Indie Uprising?

Currently, I'm working on a patch release for Epic Dungeon. Update information is available on my website. For the near future, I want to continue improving Epic Dungeon until it truly becomes the ultimate dungeon crawling experience. After that, it's hard to say. There are a few changes that are not going to be possible with my current engine, so I might jump straight in to Epic Dungeon 2.

Open mic. Anything you'd like readers to know. Go for it.

Well, first off, I'd like to thank you for giving me the opportunity to talk about Epic Dungeon and for taking the time to review it. I truly appreciate it.

I'd also like to send out a huge thanks to everyone that has played Epic Dungeon and sent me such great feedback. It's been fantastic hearing from people that are as enthusiastic about this project as I am. It really has inspired me to continue work on Epic Dungeon!

…And there you have it, straight from the source. Infinite thanks to Mike Muir from Eyehook, and a very special thanks to @merrygodown for making sure that Epic Dungeon was brought to my attention in the first place. Now, go buy this game!