The post-PAX love continues… Next up is a few words with Devon Detbrenner, Assistant Producer at Backbone Vancouver (at the time the interview occurred), and one of the hip cats behind the upcoming Wii and DS title, Monster Lab. 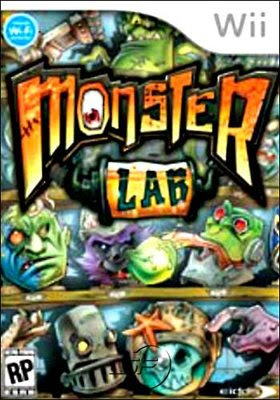 Thanks so much for taking the time, Devon.

If you don't mind, could you please tell us a little bit about yourself, and your background in games? 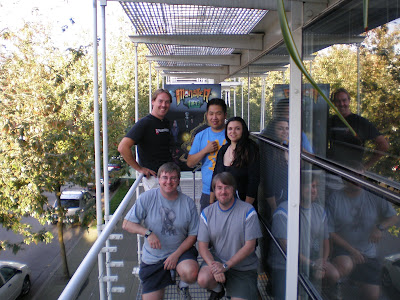 I've only recently joined this fine industry. I graduated from the Art Institute in 2005 and Monster Lab is actually my first published title.

My first real game project was a done by a fabulous group of students, and it was called Introspect, a FPPA (First Person Painting Adventure). I was the team lead for the project and we surprisingly got quite a bit of recognition over it. We've been mentioned in Games for Windows Magazine, on 1up.com, won an EA Reveal award, and were nominated for an Elan.

I've always adored playing video games (especially growing up with mostly boys) , and I had a joy-gasm when I grew up and realized this was actually a real job that I could do full time!

As an Assistant Producer, can you tell us a little bit about what you do in general, and what your role was with Monster Lab?

Actually I've recently been promoted to Associate Producer. Yes, high fives to you too.

When I started my work on Monster Lab, my job duties were primarily that of a Project Manager; I was creating, scheduling and maintaining task lists for the whole DS team.
May not be very exciting to some, but for me that's my bread and butter. 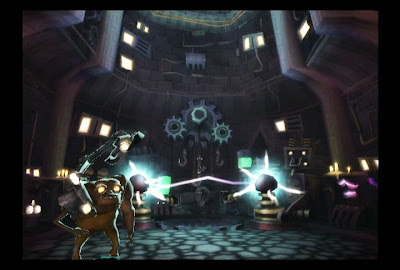 I've now recently adopted the Wii and PS2 platforms, and do pretty much anything that needs to be done. I was very involved in the experiment creation process and had the great opportunity to be involved in the design and implementation of them. I also provided some inspiration to the team with my motivational quote of the day (please re-read with a hint of sarcasm) and had been dubbed the "Bringer of Beverages".

How large was the team that worked on the game, and how long did it take to put together?

At the high point, I believe we had around 60 people working on it full time. A full team equipped with Artists, Animators, Designers, Programmers, Scripters, and of course the Producers. The full production of it has taken approximately two and a half years.

For the readers who may not be familiar with it, can you give us a brief overview of what the game is about? Where did the inspiration for the game come from, and can you tell us a little bit about possible influences?

Monster Lab is all about EXPERIMENTING! The player takes on the role of an apprentice in the Mad Science Alliance: a group of four Scientists, three of which are experts in Mechanical, Biological and Alchemical. The fourth, Baron Mharti, is a master of all three sciences and has built an undefeatable monster.

The initial goal of the player is to create their own monster which they can send out into the world and do various quests to help out the people of the Uncanny Valley. By doing this, they collect ingredients which they then take back to the castle and use them in experiments to create better parts.

Ultimately, the player must work their way through 6 different regions battling harder and more impressive monsters as they go on the path to taking down the evil Baron Mharti.

The slightly obvious inspiration behind Monster Lab is, of course, mad science! The creators really wanted a unique and elaborate ingredient and crafting system, and large environments that the player would have a chance to explore.

The art style was developed on the principle that nothing was supposed to be perfectly circular or square. This created a really skewed world. Couple that with the saturated, cartoony look of the world and characters, and the style definitely turned out to be very unique. 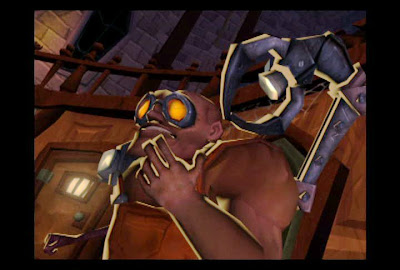 At the recent PAX, I was intrigued by the turn-based one-on-one combat, which is not something you see much of on the Wii, or anywhere else, for that matter. How big a role does this combat play in the game, and what other activities are there for players to do?

I would say combat has a colourful role, but that's not what Monster Lab is all about. 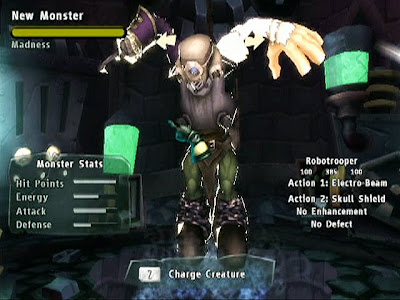 The core of the game is the experimentation, which includes going out into the Uncanny Valley to find a possible 105 different ingredients by performing ten different environmental challenges, battling enemy monsters, and helping people out in the world. Then these ingredients are used in any of twelve different experiments to create new kick-butt parts.

There's a full storyline to follow as well, which will have the player saving characters within the world who have been afflicted by the Baron's mad plans of taking down the Mad Science Alliance.

The art style of the game is colorful and cute from what I saw. Do the parts become tougher-looking or meaner as they increase in strength? What parts would you recommend for making a real bruiser, and which parts are your favorite 'just because'?

There are definitely some killer looking parts!! I wouldn't say that the parts necessarily become meaner looking as you go through the game, but they definitely provide a little somethin'-somethin' for everyone!

If you check out our website, you can get a taste of the variety you will experience by building your own monster online. If you really want to mess up your enemies (or even your friends' Monsters) I would suggest such parts as the Stinger Arm. This part has a wicked attack directly to the torso of your enemy providing upwards of 150 attack damage. 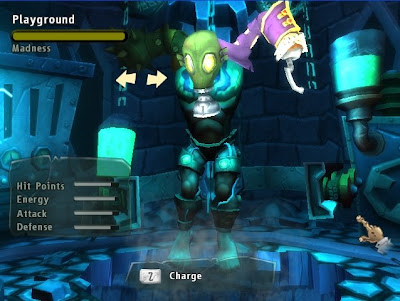 One of the best torsos in the game is the Vengeful Oni. Not only does the part look awesome, it has one of the highest energy charges, plus a decent amount of hit points that will carry "Enter Your Monster's Name Here" to victory!

It's much too hard to pick any of my favourite parts—there are simply too many, but I will say the best thing in the game is to see all these unique looking parts put together on one monster. Imagine a TV head, hot rod torso, a chainsaw for one arm, a bat wing for the other, and of course the mechanical clown legs!

Given Nintendo's adherence to using friend codes in their attempt to enact very strict levels of privacy and most players' dislike of it, does Monster Lab use the friend code system? What are your plans to enable multiplayer online?

Due to the target audience, we felt it was important to protect the privacy of the younger Mad Scientists and have adopted the Friend Code system on the Wii. You simply head into the Command Room inside the Castle and select the Inter-Lab Link to initiate multiplayer, select which friend you want to battle with and choose what Monster from your inventory (holds up to 10) and start kicking butt! The DS also has Wi-Fi Multiplayer which will allow people to play with anyone in the vicinity.

If you had to pick just one thing you absolutely want people to know about Monster Lab, what would it be?

That's like trying to pick a favourite child! Although, thinking back to when I first got my hands on the game and started playing it, the thing that excited me the most was the drastic impact the player makes on their own experience by going through the stages of building a monster—from finding the ingredients, choosing the ingredients you want to use in any of the 12 different experiments, performing the experiment (which affects the quality of the part) and then being able to create YOUR OWN monster out of the parts you created!

Not only that, but there are 156 possible base parts the player can create, and along with that there are also 4 power levels per part, 12 different enhancements and 4 different defects giving the player literally hundreds of millions of combinations of Monsters they can tinker with. I loved the feeling of ownership I had in my monster, and the feeling of excitement when I knew I had created something awesome!

Tremendous thanks to Devon Detbrenner for the interview.

For more information on Monster Lab, click here. For those of you who are already sold, the game should be out near Halloween, so keep your eyes peeled!

We just got it in stock. Sells for $39.67 and comes with free shipping…