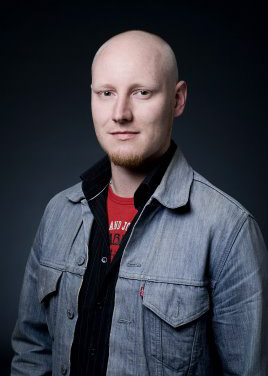 If you've been reading this blog then you will know that I was quite impressed with the recent Bionic Commando game, updated and re-imagined by Swedish developer GRIN. So impressed, in fact, that I felt motivated to track down someone on the development team and ask them a few questions about their superb effort.

Thankfully, Bionic Commando producer Dan Eriksson was quite willing to chat with me for a bit about the work involved in reinventing such a classic game.

Special thanks to Gunnar Johansson for arranging the interview, and to Matt Weise, Dan Weissenberger, and @thiefofhearts for their questions.

The whole idea with Bionic Commando was that Capcom wanted a game that catered more to the western market. That's one of the reasons they chose us to develop the game, another reason being our flexible and advanced proprietary engine. But that doesn't mean it has to be a carbon copy of other games, we have kept some Japanese feel to the game like the Biomechas, and the boss fights.I wouldn't say there's anything Swedish in particular in the game other than our sense of design and aesthetics. I think the mix works very well, and it has given us more experience that we can use in new games.

What was your philosophy in crafting the difficulty curve of the game? Do you feel it strikes a balance between old school design and newer gameplay conventions?

A lot of us grew up with Amiga and NES games, which were generally a bit more difficult and demanded more from the player. Sadly it seems that the trend today is to "dumb" down the games and hold the players hand all through the game. This takes away too much from the game experience and the game feels more like an interactive movie than a game. We want the player to learn how to play and master the game, this gives a feeling of satisfaction when you complete the game. 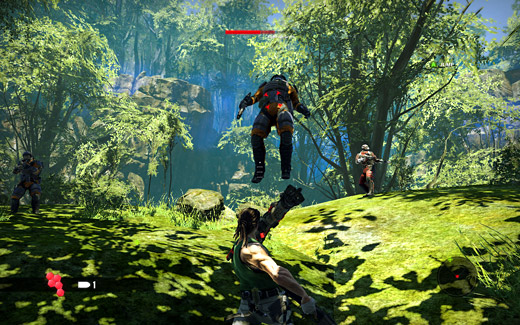 How long did it take you to refine the swinging mechanic into its current form? It only takes a few moments to become acclimated to, and it has a very instinctual, natural feeling. Was it quite difficult to nail such a crucial part of the game?

Being the core mechanic of the game the swing had to be great. We have iterated over a lot of different implementations before getting it to where it is today. It has been tough to nail it and get the perfect blend of realistic natural swinging but easy enough to learn.

Outside the swinging mechanic, how much was the team consciously trying to connect back to the original Bionic Commando in terms of things like art style, color palette, level design, combat mechanics, and so forth? Additionally, the orchestral score based on the original NES music is unforgettable. What was the vision or feeling the composer was after when updating for this new version?

Trying to tie back the art style from an 8-bit "pixely" game is not an easy task. But of course we kept influences like the red uniforms for the enemies, the leader being German and then of course the pixelated collectibles. We also strived for a bit more colorful world than you're used to in current gen games, we wanted more color than 4 shades of brown. Especially since you travel very fast when swinging, it's crucial that you can distinguish objects swooshing by. The vision for the music was to get a more epic feel, but still keep the original theme. 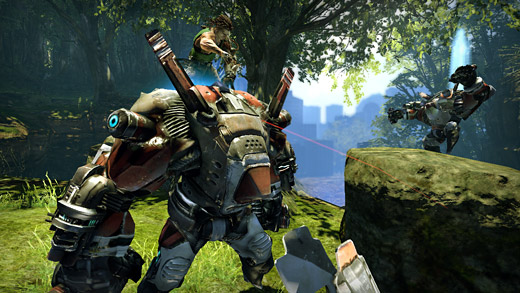 Throughout the game, there are many small touches which show a great deal of thought and care. Specifically, things like Nathan ducking his head when he's under fire, or the way certain bits of dialogue are randomly replaced at times. Can you tell us a little about the design process behind this, and whether or not it was a reaction to other current characters or character design?

The ducking is our automatic cover system, we decided that we had enough features as it is, so instead of having an active cover system where the player has to press a button to get into cover, he will duck down behind object when he's in combat. Also, the enemies can be both above and below you, which can make it hard for the player to see if he's actually in cover or not.

The way Challenges and Achievements are woven into the core gameplay was quite brilliant. How did you strike upon such an idea? 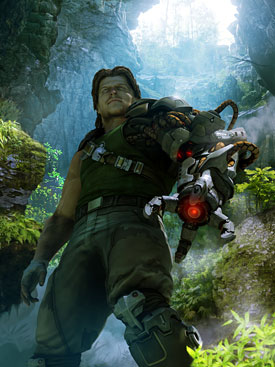 It was just the natural way to tie them together.

What was your vision for Nathan's character? He seems so sullen in cut-scenes, but so exuberant and chatty during play with his audible yells and comments. One theory we have is that it might be the "connection" between Nathan and his arm itself changing his mood and lifting his spirits. Was that at all intentional?

Nathan has been imprisoned for a while for following orders. Being free and having his arm back makes him happy. Most cut-scenes involve "Super Joe" who was part of sending Nathan to jail, of course he's a bit pissed at him.

In terms of story, could you tell us about how the plot of the game changed over the course of development, and what elements might have been left out? For example, there are some clips available online that show certain scenes not found in the final game like Nathan's wife in a canister, and so on. Additionally, several of us were left with the impression that the story was meant to be told from a soldier's perspective, meaning that the behind-the-scenes actions and certain parts of the story were held back because Nathan himself would not have been privy to them. Was this effect intentional, and if so, do you feel the story was successful?

Being on tight deadlines there are certain things that needs to be cut or changed during development. So instead of cutting down on features or game-play, we had to cut down some story parts. All scenes in-game are either scenes where Nathan is present, or dream sequences about his wife. To fill out the blanks of the back-story there's a comic up on the website.

Examining specific parts of the plot, was there ever discussion of re-inserting Master-D (a.k.a. Hitler) into the game? Groeder seems very Germanic and vaguely fits a similar role, although not quite. Can you tell us about the process of crafting this aspect of the story?

We wanted a connection to the old game without repeating the story, that's where Groeder fits in. 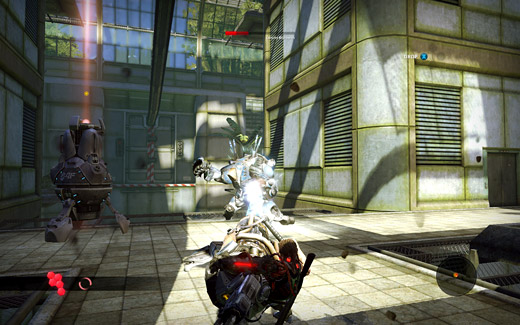 Can you expand on Nathan's motivation for the final scenes of the game? He seems very driven to find out more information about his wife despite actually finding some very telling pieces prior to the endgame. Is he in a state of emotional denial? Finally, the actual ending itself has been the subject of some controversy. Personally, we are great fans of its boldness and vision here, but the game ends on a very dark, somber note that caught many players by complete surprise. Was there ever concern about how this ending would be received?

Even though he had an idea of what happened to Emily, he doesn't really know. He want a final answer from Joe. Of course we discussed the ending and knew it would surprise some people, but having that said, you don’t actually know what happened to Nathan.

Certain reviews have taken a fairly negative tone with Bionic Commando, specifically in regard to things like the way radiation limits movement in certain areas, as well as the quality of the story. What does your team make of the criticism (specifically in regard to the way this new Bionic Commando is a re-imagining of an older classic and not a brand-new IP) and do you feel it?s fair? What, if anything would you do to address these criticisms in the future?

Everyone are entitled to their personal opinion on what makes a game good or bad. However when there's reviews complaining on stuff like: "it's not an open world sandbox game, so it sucks", feels a bit unfair. The game never intended to be an open world sandbox game so the critique is not really valid. It's like saying that Grand Theft Auto 4 is a bad game because it doesn't have a swing mechanic. It feels like a lot of the negative reviews expected a totally different game, and based their review on what they thought they game would be instead of actually reviewing the game for what it is. Of course we take valid critique seriously and take notes on what to think about in future games. 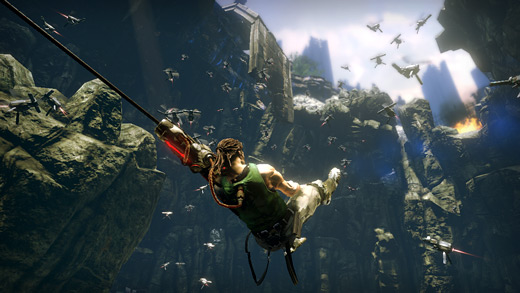 Is there any talk of a sequel? Bionic Commando was one of the few games in recent memory that genuinely left me wanting more. Nathan seems like such a capable character, and there are so many directions the series could go. For example, the arm seems custom-made for tackling huge bosses, even larger than what we saw. More lengthy segments featuring the swinging mechanic itself would be quite welcome, and challenge segments similar to those found in Rearmed would be a treat as well. What can fans of this new Bionic Commando look forward to?

I would personally like to see a sequel, however it's entirely up to Capcom to decide.

Infinite thanks to Dan Eriksson for the words, and here's hoping that Capcom will see fit to grace players who know what's good with a second installment to one of the most enjoyable games of 2009.

Yeah, those numbers came out after the interview had been completed, otherwise I would have brought it up. that’s a god damn shame, since i loved the game and really do think it’s well worthy of a sequel.

Early word, and I do mean early, is that Bionic Commando sold only 27,000 units in its first week. It launched on May 19, so it was only out for less than half a month, still those are Wii-like numbers for a game with a hardcore following and released across three platforms (PS3, 360, PC). Things could pick up through word of mouth, but given the mixed reviews it has been getting until and after launch, that isn’t very likely.

Too bad because it looked like the producer and the dev team were trying to do good by the fans.