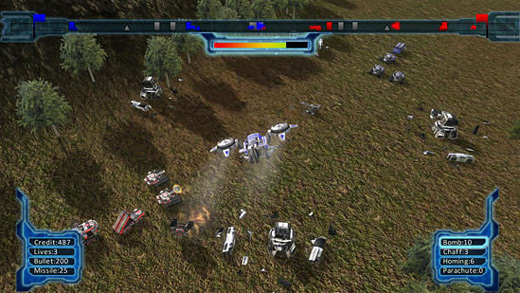 Although it's been a tough job lately between the rush of fourth quarter and the sheer number of Indie games released every week, keeping up with one of the lesser-known segments of Microsoft's downloadable content certainly pays off. My most recent Indie addiction? Armor Valley, from Protégé Production.

Available now, Armor Valley immediately stands out from most of the Indie crowd for a few reasons—Primarily, it's easy to see that the game is much more sophisticated than most of the competition. Rather than a simple puzzler, Avatar app or clunky platformer, it's a military-themed hybrid of Action and Real-Time Strategy genres. Combining traditional "build up and swarm" themes with real-time control of a commanding aircraft, the formula is a winning one. Toss in multiplayer options in addition to the campaign mode, and you've got something that is on a higher level than most of the other offerings alongside it.

Creative and Technical Director Robin Tan (of Envisage Reality, in association with Protégé Production) was gracious enough to spend a few minutes talking to me about this impressive 2009 IGF China festival winner.

Hi Robin, thanks for talking to me. Is Armor Valley Protégé's first game?

Armor Valley is Protege's first official title, but certainly not the first time we've worked on a game. We have worked on other people's titles under contract (I can't name them because we aren't allowed to disclose them) and even a 3D training simulation/visualization for the army.

How many people were on the team, and how long did it take to put together?

The project took about 5 months, with some bug fixing here and there. We had nine people in the team. The project was funded by Media Development Authority (MDA) Singapore and Microsoft, so we had to finish the game in that timeframe.

What can you tell us about the people who are on the team? What are their backgrounds and previous experience?

The team is comprised mostly of industry veterans with over 10 years of experience. The team was made up of five coders and four artists. Most of our team is from Singapore, though we have team members from all over the world.

Was the game difficult to create? How did the final version differ from the original plan, if at all?

Not difficult at all. Firstly, it was not a complicated game—we improved a design from an old 2D game we used to play. (Hint: we even named it similarly.) The XNA framework (needed to develop for Xbox360 Indie Live Community) was pretty easy to use because it was based on DirectX, and also there is a huge community with a lot of educational materials. The main difficulty was making it run on the Xbox 360 properly because the XNA framework behaved differently from the PC development version due to memory management.

In terms of differences, initially we wanted to add the ability to deploy air units so you could buy air support. However, it was difficult for the air unit AI to behave to expectation when there were multiple air units. It became a dogfight with too many air units, so given our deadline, we didn't resolve it properly and it got dropped. 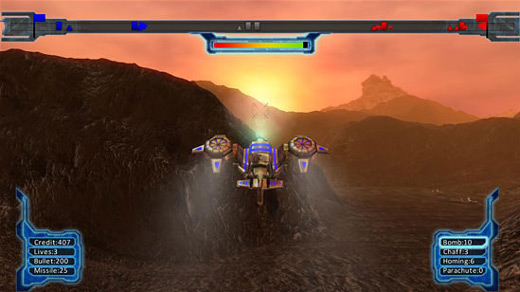 Playing the game myself, there have been several times when I've been within inches of victory only to feel as though I'm at a standstill; I sometimes just can't advance that last little bit to capture the enemy base. Is that difficulty an intentional decision on the part of the design team?

Yes, this was part of the design. Even though you may get forced back to your base, you still have a chance to fight back. Capturing buildings and deploying balanced squads are the key to push forward to victory. But, the tactics against a human player are different when playing against the computer. A human player has limited lives, so he won't spawn indefinitely. Also, other units except Destroyers are ineffective against bases, so a human player can choose to ignore them approaching. For the AI, it tends to go after the closet tanks first, so you will need provide air support from missile launcher escorts.

Any other advice for people playing Armor Valley?

One of the key strategies is picking up troopers and parachuting them. This allows them to capture key strategic buildings quickly, and also to steal credits. Some of the buildings like Dragon Turrets are indestructible by ground unit attack, so you can see the value in capturing something like that quickly. Stealing credits is a big gamble, but is an essential strategy to win in higher levels against the AI, who has unlimited lives.

Are there any plans to possibly polish the game a little more and release it as a full Arcade title?

Yes, we are actually waiting to speak to Microsoft about promoting the game to full Arcade title status. There are quite a few areas to polish that we dropped due to time constraints, though.
We just uploaded a new version with improvements to the sound system, and also some bug fixes. For example, the tanks weren't flying after being blown up, and we didn't notice that in the old build. The fixes should be available 2 weeks after going through the peer review.

Finally, when not working on games, what titles do people at Protégé like to play? Any current favorites? Classics?

We don't really play a lot of games these days because making games gives the same enjoyment as playing them! One of our all time favorite is Geometry Wars, though. It's a quick game, and provides a lot of kicks.

Thanks very much to Robin Tan and the entire Armor Valley team. Best of luck in their endeavors, and when Armor Valley makes it to XBLA proper, I'll be there on day one – you should be, too.