Insane? No… it's Genius 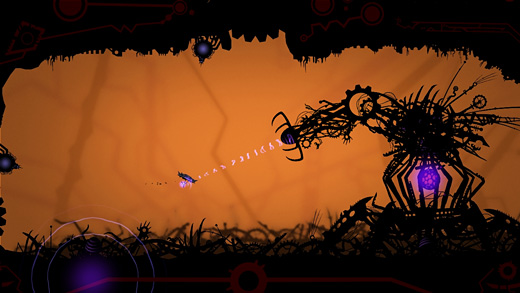 HIGH The variety (and quality) in puzzle design.

a perfect score. Considering that it's common for me to play through a year's worth of releases and never award double digits, admitting that I was so tempted is probably the (second) highest praise I can give—and it deserves every bit of it.

Insanely Twisted Shadow Planet is a download on Xbox Live Arcade that fits neatly into the "Metroidvania" genre. The formula of starting with next-to-nothing and then accumulating power-ups to facilitate exploration of a partitioned map should be well-known to most players, and it's a great foundation. However, the key to knocking a title like this out of the park is to ensure that the abilities gained are both interesting and functional, in addition to having a variety of situations in which to use them. Without nailing those elements, exploration is reduced to hours of opening locked doors with a boring set of keys.

As for Insanely Twisted Shadow Planet? The developers have nailed it.

Placing the player inside a nimble flying saucer, the adventure spans a number of environments filled with outstanding puzzles, and the top notch puzzles are supported by an abundance of quality power-ups, each with functions significantly different from the rest. With both aspects being exceedingly clever (and with a little help from the virtuoso art) it's not overstating the case to say that Insanely Twisted Shadow Planet is the perfect storm of its genre.

Darting through a hostile tunnel while volleying missiles is exciting, but then discovering that same missile becomes a remote-controlled device to open a gate up ahead is even better. I was delighted to manipulate small blocks with the game's version of a gravity beam, only to find that the beam serves double duty as a tether for pulling the saucer upstream through high-velocity currents. The ship's laser is a potent means of offense, but can also be used to ricochet behind enemy shields, or to bounce off of reflective surfaces for targets that are otherwise unreachable. These are just a few examples, but Insanely Twisted Shadow Planet is full of "aha!" moments and thoughtful applications of its mechanics, and because of this, time spent is a nonstop rush of discovery and experimentation. 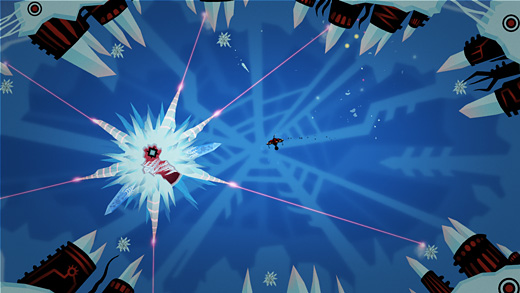 The stellar gameplay is perfectly married to the stunning visuals. Every room and passageway is simply rendered in clean, silhouette-like style, yet never lacking in detail. Thanks to the imaginative design, the differences between each area are clearly discernible—the organic caves are crawling with tentacles and strange creatures, while the mechanical area seems almost entirely comprised of gears and moving parts. The amount of surprises and unique occurrences elevate the game, and it's safe to say that a player will find something new around every corner. With so much variety (and no repeated filler) Insanely Twisted Shadow Planet stays engaging from start to finish.

Topping it all is the game's rock-solid understanding of the phrase "show it, don't tell it." With no dialogue in the adventure whatsoever, the developers set up the story through visuals alone, and never rely on a narrator, audio logs, radio comms from an outside handler or any other sort of narrative shortcut. It's utterly refreshing to play a game from people who are crystal-clear about capitalizing on the innate, unique strengths of the medium and trust in it completely.

Even the multiplayer mode is of exceptional quality. Although the game could easily have been considered complete without it, Fuelcell has included a cooperative "Lantern Run" mode that supports up to four players, local or online. Featuring the same nimble craft from the main game, this mode strips out exploration and replaces it with a tension-filled rush to carry a beacon to the far end of a passageway filled with enemies and obstacles. The pace is set by an enormous alien squid constantly closing in, and progress can only be made with a high degree of teamwork. I'm not generally one for multiplayer, but the Lantern Run was something I kept coming back to.

has been tuned, polished and groomed to the point that it's impossible not to recognize the craftsmanship and artistry that's gone into its creation. The pacing is perfect, the visuals are pure elegance, the puzzles are interesting and diverse, and there's not an ounce of fat on its bones. Fuelcell Games displays a savant-like grasp of the material they've created, and the result is easily one of 2011's best games. Rating: 9.5 out of 10.

Parents: According to the ESRB, this game contains mild fantasy violence. While certain areas of the game are a little creepy, I wouldn't say that there was any questionable content to warn young ones away. The violence consists of nothing more than a spaceship shooting missiles or lasers at alien creatures, and there's never any blood or gore. There is no sexual content and no questionable language. It may be a little on the darker side, but I'd say it's still quite safe to play for children old enough to grasp it.

Deaf & Hard of Hearing: You will have no problems at all. There is no dialogue in the game of any kind, and there are no auditory cues necessary for gameplay. Everything is intensely visual and on display. It's totally accessible.

I bought this game on the back of your review and I definitely don’t regret it. I encountered a few things you did not mention that I found to be very important. First, I didn’t like the boss fights. *Potential Spoilers* Though constituting a minority of the game, I found the boss fights to be fairly dull and forgettable. They ranged from either totally unimpressive (“Wait, I killed it?”) to stupid. To explain what I mean by stupid, you just spent the entire game solving puzzles just to play a shoot em up with the final boss? Based on the… Read more »

It’s one game, like Fahrenheit/Indigo Prophecy: two names for different release areas. One of the very rare good wiiware titles, imho, and so i recommend it anywhere i hope it fits. Basically it is a labyrinth puzzle game. The player controls the level and the ball is exchanged to water and this reacts to your movements and you can also let it jump for example. With its different aggregate states and the abilities the player unlocks various puzzles have to be completed in each chapter. It got some good reviews but it seems to be widely ignored because it’s a… Read more »

Hey Crackajack> What system are those games on? I haven’t seen much on either… Chris> Every player is different, but I didn’t have any issues with either. i’ve heard some grousing about the claw, but if you use it deliberately (i.e.- not flailing around with it)there’s no problem. as for the dark room, it’s the final level of the game, so i would expect it to be a little more difficult than the rest. was it frustrating? not really… i got through most of it on my first try. not trying to brag or anything, but i didn’t see it… Read more »

I’ve read elsewhere that the controls can be finicky at times and there are moments in the game (the dark room) where the gameplay can be exceedingly frustrating. I didn’t read any of that here. Are other reviews overstating the fact or are those real issues that don’t dent the experience?

Have you played Hydroventure/Fluidity? Since this review sounds a lot like you should like this also, as long as you can enjoy less action oriented games too.
The only thing they could have improved is imo to bring it on a portable device with gyroskopes since control of the water would then feel even more direct.

Since when are insane and genius mutually exclusive? 😉