The mystery title I mentioned in the last update can now be revealed, and it was Insanely Twisted Shadow Planet from Fuelcell Games right here in Seattle. The review embargo ends tomorrow. However, I don't think it's spoiling much to say that it's one of the best games I've played all year.

It definitely receives my highest possible recommendation, so if you are at all interested in playing a metroidvania-style game that's packed full of great art, awesome puzzles and neat situations, do yourself a favor and check it out when the game is released on August 3rd—It will not disappoint. 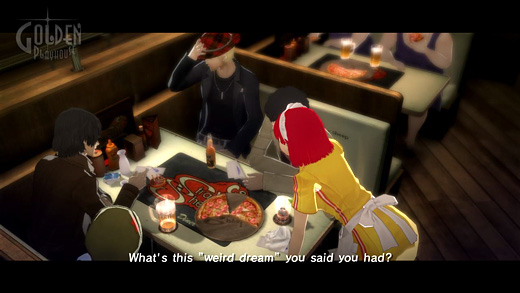 In other games news, I finally got my copy of Catherine and started it up about 30 seconds after it arrived.

At this point I am at exactly the halfway mark and I'm really, really enjoying it. Atlus once again proves that they have some of the best writers around, and their style is second to none. This tale of an unintentional philanderer is having no problem whatsoever keeping my interest… in fact, one particular cutscene had me literally on the edge of my seat.

The gameplay is quite good as well, though it will likely be most appreciated by those players who have an affinity for puzzles. I get a great deal of enjoyment out of scaling the towers myself, but I will admit that I do find it quite challenging at times. A few people in my Twitter feed have been saying that it wasn't nearly as difficult as they expected, and I'm jealous of them. The standard stages aren't too bad, but when the bosses show up, my fail parade begins. Thankfully, the developers have included plenty of opportunities to earn continues… because I needs them.

Portable-wise, I'm taking a brief break from Monster Hunter Freedom Unite. My oldest son spent about two months here with me for the summer (he's returned home now) and during that two months, we did at least a couple of quests each day. Sometimes more. That was pretty intense, so I felt like a little time out would be nice though I do plan to come back to it in order to finish up all of the high-level content that I haven't touched yet.

Anyway, I decided to dig into my backlog and came up with The Legend of Zelda: Spirit Tracks for the DS. I'm not the biggest Zelda fan (mostly because I feel like Nintendo is running the series into the ground) but I was in the mood and it was on hand, so there you go.

After spending somewhere in the neighborhood of three or four hours on it, I'm finding it to be pretty pleasant so far. The dungeons have been fairly simple and driving the train around has a sort of I'm-bored-but-I'm-not-really-bored appeal to it. The touch controls aren't too annoying, and I do enjoy having princess Zelda along as a companion.

I can't say that it's so good that I can't put it down, but I'm chipping away at it a little each day, so that's something.

So… Approximately 25 days until PAX Prime. Tickets have been sold out for a while and the crowd will be huge. I'm going to be there. Will you?

I looove Catherine. An incredibly enjoyable and charming game.