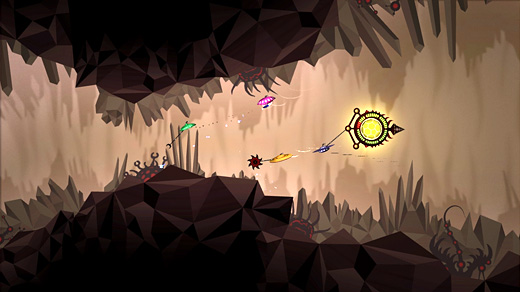 A small group organized by @PNWJournos (pnwjournos.com) was invited to the Fuelcell Games studios for a sneak peek at upcoming DLC for one of the 2011's best titles, Xbox Live Arcade's Insanely Twisted Shadow Planet.

Hosted by Joe Olson, John Scrapper and Michel Gagne, the event gave our journos (including myself) the honor of being the first people outside the studio to try out Insanely Twisted Shadow Hunters, and it did not disappoint.

Structured as an addition to the main game similar to the already-included Lantern Run mode, Shadow Hunters changes things up by incorporating many more elements taken directly from the campaign, while still offering an experience all its own. Essentially, it can be best summed up by a comparison—if Lantern Run was about split-second reactions and speed, Shadow Hunters is about teamwork and risk/reward. 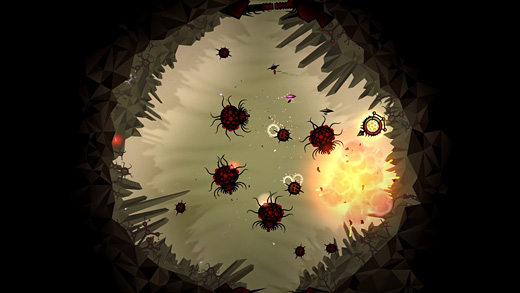 This new mode begins with a cutscene that picks up exactly where the final scene of Shadow Planet left off. Although players who completed the campaign can feel proud that they cleansed the globe of evil "shadowsauce", as the camera pulls back, it's revealed that there is still a ring of asteroids corrupted by the darkness. Clearly, the player's work is not done.

Up to four players can hop into their own customizable saucers and head out into the series of large rocks in orbit. Once the game begins, players must tow a large light bomb to the core of the current asteroid. It's similar to carrying the lantern around, with a few twists; first, the bomb has a final destination. Second, the bomb has abilities, unlike the inert lanterns. After acquiring a powerup, the bomb can activate a cannon mounted on its rear for self-defense. It can also generate a large shield, rendering it (and anything within the shield) invincible for a limited time—it's great for making a quick push towards the goal. 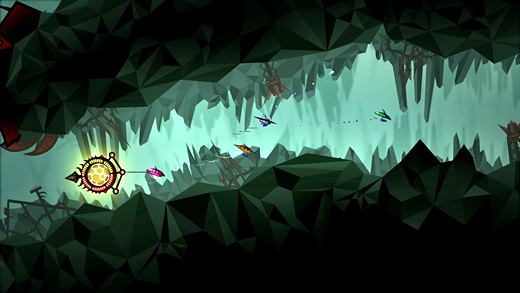 Structurally, each level is a small world complete with respawn points, combat arenas, and powerups to earn. However, the catch is that the light bomb has a running timer counting down towards 'splodesville. The time can be recharged by reaching certain points, but the pressure of being on a clock never goes away. Players must balance the bomb's impending doom with the potential reward of earning weapons, shield upgrades or other helpful items found through exploration.

Another place Shadow Hunters varies from Lantern Run is the inclusion of bosses at the core of each asteroid. It's not enough to just get the bomb to the goal in time, players also have to finish off the guardian before claiming victory. Interestingly, the bomb loses time when hit, so even during boss battles at least one player must care for it and shepherd it around to avoid attacks.  If everyone focuses on the boss, it's all too easy for the bomb to get banged up and go kablooey before it's desired. 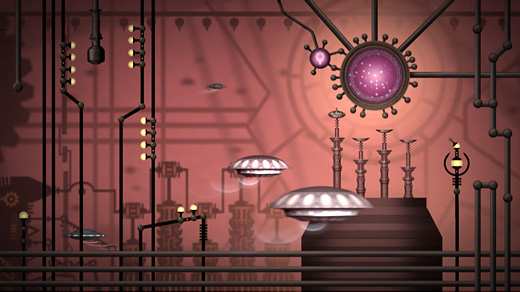 Despite the differences, there's one place where Shadow Hunters is similar to Lantern Run—it's hard. Though the version we played was still in the process of being tweaked, Fuelcell stated that the extra modes were intended to be more "hardcore" than the more easygoing campaign. Players who take the time to learn the intricacies of the design will certainly get more out of it, and more casual saucer pilots should be prepared for a stiffer level of difficulty than might be expected.

At the time of the hands-on, there was no official launch price or release date for Insanely Twisted Shadow Hunters. However, when asked, Fuelcell stated that this DLC will likely be the last addition to the game. Although they weren't able to disclose any info on their next project, Gagne mentioned that he was ready to tackle a different visual style and leave silhouettes behind. Expect the next Fuelcell project to be a change of pace for the studio, both in terms of gameplay and visuals.

Infinite thanks to Joe Olson, John Scrapper, Michel Gagne, and the rest of Fuelcell Games. Look for Insanely Twisted Shadow Hunters to hit Xbox Live Arcade in the near future, and if you see me online, feel free to hit me up for some co-op!