A Retcon of Heroic Proportions 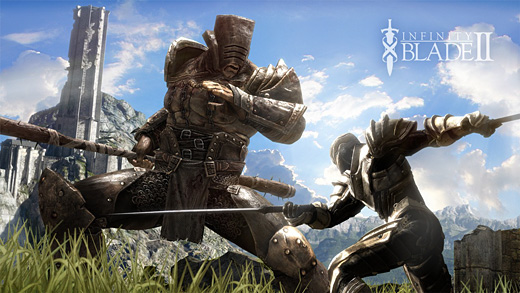 In general, I'm not a big fan of video game novelizations. Most titles I play through satisfy my curiosity about their stories and characters via the normal cut-scenes and dialogue, but once in a while I want to know more. With its unorthodox mixture of high-tech, magic, and a fetish for impossible armor, the Infinity Blade series produced by Epic Games and ChAIR is one such property.

Although both installments currently available on iOS give the player only the slightest bits of story in between tons of finger-swipe hacking and slashing, what they do share is quite intriguing. For example, I can clearly recall unlocking the secret chamber underneath the God King's throne for the first time, only to find… well, I won't spoil that, but let's just say that what it held it wasn't expected.

Awakening is a full-fledged novella which bridges the narrative gap between Infinity Blade and Infinity Blade II. Although I can't say that I was familiar with author Brandon Sanderson's work prior to this, he's published several science fiction and fantasy novels, and his professional skill shows. The narrative of main character Siris, ersatz companion Isa and companion golem TEL flows nicely from beginning to end, easily translating the on-screen action into something equally energetic in words.

Beyond the narrated skirmishes, I enjoyed the greater degree of depth with which the author was able to give to the characters. The hero's upbringing was wonderfully imagined, and I've also wondered what the Infinity Blade world might be like once past the crumbling castles and underground areas shown in the games. With very little canon information to go on and a relatively brief word count to work with, Sanderson paints these pictures nicely.

However, the thing I found most fascinating about Awakening was how so many facets of the actual game were given explanations and rationales which make perfect sense when examined in the larger context of the series mythos. For example, the healing rings so vital to gameplay are shown to accomplish their mending miracle by making Siris age a year's worth of time in a single compressed moment. Even more significant, the stiff way enemies hold their position and pose before each fight is revealed to be an ancient honor-based tradition. Nearly every aspect of Infinity Blade's design has some sort of logic behind it, and learning that was something I very much appreciated.

In light of this, I'd say that Awakening is probably one of the best video game companion pieces I've ever encountered. Although I don't have any idea how much of this information was created before someone thought to make a book out of it, Sanderson's effort in transforming obvious design choices into narrative world-building is a heroically successful effort, and nearly flawless. From a nitpicky fanboy's perspective, I wasn't quite satisfied with the way he explained the origin of the generational sacrifices that comprised the core of the first game, but I can hardly blame him—I suspect the developers might not have had a solidly logical premise behind it to begin with.

Apart from that little bit of retcon-flavored fudging, Infinity Blade: Awakening genuinely enhances the enigmatic world of immortal swordsmen wearing masks without eyeholes and also answers the questions players are sure to have after the second game's opening scenes—all for less than the price of an in-app purchase. It's a win. Rating: 8.5 out of 10.


Disclosures: This book is 188 pages, and was obtained for $2.99 via paid download. The content was read on the iPhone. There are no multiplayer modes.