Get thee behind me, Satan 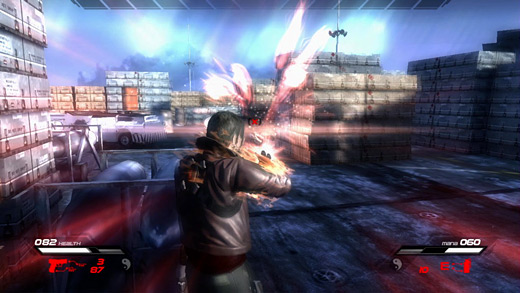 HIGH It's got a great concept—playing for the evil side hasn't been done much.

LOW It doesn't deliver on the concept—it might as well be any random shootfest.

I have to admit, I'm a sucker for a good premise. A game doesn't have to have the latest bells and whistles or push the bleeding edge of technology, as long as it has a hook. Give me an idea; some kind of interesting concept or novel twist, deliver on it, and I'm yours.

At first glance, Infernal: Hell's Vengeance seems like it could be one of those games—putting players in the role of Ryan Lennox, a fallen angel on earth, bad things happen and Ryan decides to join forces with the underworld. It's celestial war. Hijinks ensue.

As soon as I read the description, it seemed ripe with possibilities. After all, I'm a fan of third-person shooters and doubly so for those that manage to include supernatural elements. Additionally, it's pretty rare that developers ask players to take up arms in support of evil. A few games pay lip-service to it, but it's extremely rare that players can be as bad as they want to be. Long story short, this game started out with plenty of potential to land on my good side.

Technically speaking, Infernal: Hell's Vengeance is firmly set in the last generation. The graphics are reminiscent of mid-range PlayStation 2 efforts, and level design feels like it's an equal number of years behind the curve. A standard, no frills shooter in every sense, the player is often held up between waves of goons by locked doors requiring key cards or nearby switches to be pushed. Environmental interaction hardly exists, and things like waist-high fences are impenetrable barriers.

(By the way, the game features no checkpoints or auto-save of any kind, so if the player takes an unexpectedly fatal amount of damage, the game resets to the last manually saved point. You've been warned.) 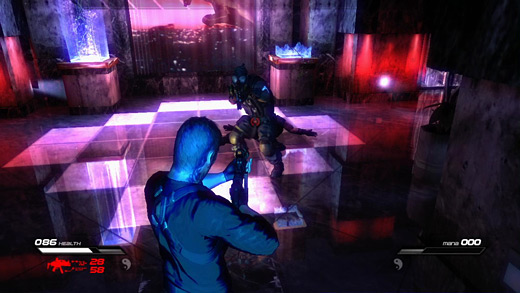 The underwhelming, outdated core design is a significant hurdle, but one that certainly could have been overcome if the developers had come through on the conceptual side. However, Infernal: Hell's Vengeance is a disappointment in this respect as well.

After being imbued with the power of Satan, it seems the best that Metropolis Software could muster were a powered-up flaming shot, a quasi-teleport mostly used to solve simple puzzles, and the ability to drain health and ammunition from corpses. Perhaps I expected too much, but having the Lord of Darkness in my corner seems like it should carry some more oomph. I mean, what sort of fallen angel is stopped cold by a simple locked door? With the load-out Lucifer provides, the main character might as well have been any generic action man or spy. There's nothing especially evil or unholy going on.

Reinforcing the thematic inconsistencies, silly things pop up throughout the adventure that further erode any pretense of actually being one of Hell's minions. For example, after being told that killing innocents builds up the player's health and stamina, the developers refuse to allow innocents to be killed. I tried eliminating a random senior citizen in a nearby village, but my gun would not fire. Frustrated, I turned my sights to a nearby goat only to find that it was similarly protected. Divine intervention, perhaps?

Even more ridiculous, the game posits that the absence of light is actually evil. During a cut-scene, one of the characters states that a particular room is brimming with an infernal aura. What was so foul about it? The lights were off.

Something like Infernal: Hell's Vengeance might have gained a minor following during the last generation (and that's a big might have) but it simply doesn't have any place in today's environment. It's technically weak and showcases no forward-thinking in terms of design, and the conceptual side is just as stale. Why bother going through the motions of crafting an elaborate tale of Heaven versus Hell if all it boils down to is a random hero firing flaming bullets in a game straight out of 1999? Rating: 3.0 out of 10.

Disclosures: This game was obtained via publisher and reviewed on the Xbox 360. Approximately 4 hours of play were devoted to the single-player mode, and the game was not completed. There are no multiplayer modes.

Parents: According to the ESRB, this game contains blood, language and violence. The usual caveats for a shooting game apply: the overwhelming majority of gameplay consists of the player shooting human and human-like enemies with a variety of firearms. It's not especially graphic, but it's bloody enough and I'm guessing that most parents will not want this kind of unimaginative kill-fest in the hands of their young ones.

Deaf & Hard of Hearing: You should expect the same sorts of issues that most shooters have. Although there are on-screen cues to enemy locations, not being able to hear gunshots and enemy sounds means that hearing-impaired players will likely take a few cheap hits. On the plus side, subtitles are enabled for all cut-scenes and spoken information.

I hear it has sloppy controls for the 360 port but I quite enjoyed the PC version yes its a basic level shooter BUT I found it to be better than most games like COJ,Alpha prime,Cryostasis,Fear spin offs and fear 2 ect I call these above average around a 6 even soylent..er… Bionic commander is around a 6 despite its faults. I think the so bad so good dialog plus the interesting mechanics make it to at least a 6 but if the ports control is wonky a 5 perhaps. Then again I call halo ep 3 a 6 and… Read more »

Hm, good question. Now that you mention it, that does seem too high. It’s definitely worse than just a bit below ‘average’. Not sure what I was thinking honestly. Score fix!

I know gamecritics prides itself on emphasizing the review text over the numerical score, but I can’t help but feel like a 4.0 for this game seems quite high given your description of it.

Care to elaborate on the redeeming qualities that kept it from the very bottom of the barrel?

[quote=Mike Doolittle]What’s the difference between this and the PC version from ’07?[/quote]

Mike did you find out the difference between the two?

What’s the difference between this and the PC version from ’07?