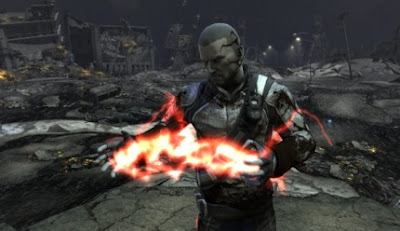 So, I told myself I wasn't going to plunk the money down after playing the InFamous demo on the PlayStation Network, but I did. It's just that I've been playing so many RPGs lately that I was starting to burn out of gaming altogether, and I definitely needed something action-oriented to get the juices flowing again. I was weak, I admit it.

Don't get me wrong, it's not that I thought the demo was terrible, it's just that I expect a great deal from Sly Cooper developer Sucker Punch, and the little bits I saw of their new electricity-themed open-worlder didn't quite click in all the places I thought it should. Still, I've often said that Sucker Punch has never made a bad game and I was definitely willing to give them the benefit of the doubt in this case. I wasn't able to put in as many hours tonight as I would have wanted to, but after about 2 1/2 in Empire City, I'm feeling as though my instincts from the demo were correct.

I'm sure everybody and their brother is already hip to this, but the gist of InFamous is that a bike messenger-type dude is caught in a weird explosion, and ends up with various types of electricity powers as the city itself starts a long, slow slide into hell.

The game starts off well enough, but at this point I'm feeling like Sucker Punch could have really started the game off a little slower, specifically with respect to character development and story pacing. Things happen pretty quickly, and I'm not quite on board with everything that's going on. For example, in one fast-paced cutscene, a quick line or two details the romantic schism between the main character and his love interest, but it goes by so rapidly and with such little fanfare that I nearly missed it. Beyond that, the main character gets recruited by a government agency pretty much immediately, and from that point on it's all about doing missions. 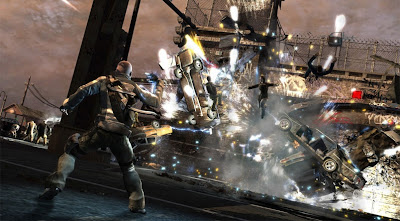 I get that the developer wants to get the player into the game without a lot of downtime, but what I've gotten so far in terms of motivation and development has been pretty thin.

As for the actual gameplay, I've done a few core missions and four or five side missions. So far it's about what I expected. Everywhere you go, there are a lot of goons that snipe at you from a distance (which is quite irritating) and the game has been emphasizing the main character's parkour/urban exploration skillz by having him scale every surface like Spider-Man out of costume. No really exceptional missions so far, but then again, I'm just getting started. It's all been fairly combat-oriented, with the character's electricity basically functioning like any other projectile weapon.

More thoughts to come as I get further into it, but part of me is already wondering about the different directions that Prototype (the other open-world superhero-ish game coming next month) will take.

I played a few hours and yeah i agree with you. Pretty generic main character to whom i have no attachment whatsoever.

Also i feel pretty vulnerably to the gunfire which takes away from the whole super hero feeling. Missions so far are pretty standard and almost always involve combat. Climbing buildings is just tap and tap and tap.

The funny thing is i am still playing it even though it is a bit underwhelming. So it must be doing something right and i just have not figured it out yet.