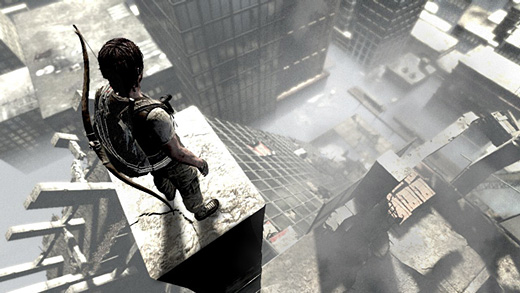 I've been invited by the fine fellows over at the Cane & Rinse podcast to record a show with them next week on the topic of I Am Alive.

I've just started replaying the game tonight in order to refresh my memory, and just a few minutes after starting it up, I was instantly reminded of why I thought it was so brilliant in the first place.

In a nutshell, it's a post-apocalyptic story about a father who was trapped far from home when disaster struck, and is only just now returning to find his wife and daughter.

There are a number of things that make this title unique, such as the extremely stark visuals, the dark, mature subject matter and the interesting combination of environmental traversal and highly non-standard combat which is more like lethal puzzle-solving than it is about punching dudes out.

I won't talk about it too much at the moment since I need to save some of that juice for the podcast, but if you're curious, the game comes highly recommended if you're a fan of exploring the fringe or pushing boundaries. My full review can be found here, and @RaygunBrown chose it as his personal game of the year when it was released. His words are right here.

By the way, if you've got some comments and want to hear them read on the show, head on over to the Cane & Rinse forums to leave some comments if the mood strikes you.

I'm pretty stoked to start the new Tomb Raider as soon as I can get my hands on a copy, but my plate has been fairly full even without it.

I’m guessing I'm about a third of the way through this one, and so far it seems like a winner. It didn't blow me away from the get-go like the last few 3DS games I've played have, but it's enjoyable and this new interpretation of the Castlevania series is certainly interesting.

In terms of design, it feels like a halfway point between a straight brawler and the sort of backtracking action that was found in Symphony of the Night. I'm not sure that it entirely works, but the developers get enough right in other areas that it's not too hard to look past some of the oddness.

My full review will be coming as soon as I can finish it, but in the meantime, just a quick heads up—I never spent much time with the original Lords of Shadow, but the ending to that game is spoiled in the opening cutscene of Mirror of Fate. If that sort of thing matters to you (and it does to me, actually…) then be aware that the spoiler is there and act accordingly.

By the way, I forgot to mention it earlier, but here's a QR code for a bonus quest in Etrian Odyssey IV’s "Cramped Nest" dungeon, straight from the good people at Atlus.

Finally, the Tropes vs Women video series Kickstarted by Anita Sarkeesian is now up on YouTube, and it's a great piece. It's definitely Nintendo-heavy, but I think that's as fine a place to start as any, and it makes sense that this series would begin there given how much influence and history the company has.

I watched it earlier this evening with my wife, and we both found it to be very educational and a good conversation starter. Definitely looking forward to the second installment.