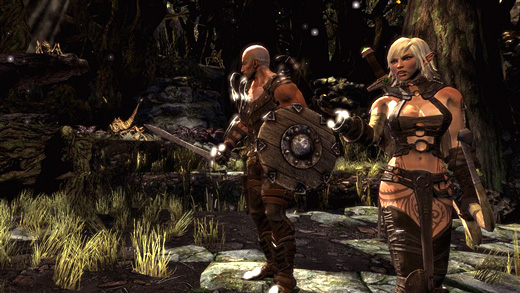 So the wife and I have spent the last couple of days playing Hunted: the Demon's Forge in co-op.

This is an interesting game for the fact that Bethesda did not send out any pre-release copies to reviewers, instead mailing them to coincide with the retail sales date. In general, this is a sign of a publisher who has no confidence in the product, but I'm not quite sure what made them send it out with such little fanfare. If you ask me, it's a much more enjoyable game than Bethesda's other recent release, Brink, and they were trumpeting that one to the high heavens. I think maybe someone in their marketing department got a few wires switched…

Anyway, it seems that there is a lot of confusion about this game, and with so little information out there, that's not hard to understand. Here's the scoop:

In a nutshell, Hunted is basically Gears of War done up in Gothic style.

Hulking bruiser Caddoc and reckless elf E'lara have more than a little in common with Marcus and Dom, and for those players who enjoyed Gears (like me) this isn't a bad thing. The game's levels are basically laid out the same way as Epic's, with each crumbling castle or muddy courtyard designed in a mostly-linear fashion to lead the player from point A to point B.

The characters are actually balanced fairly well—each one has access to melee, magic and ranged attacks, but they each specialize in their own disciplines. Caddoc is a monster with a sword, but his crossbow attacks are painfully slow. E'lara deals a healthy amount of death from a distance, but her swordplay leaves much to be desired. You get the idea.

So far the levels are absolutely huge. The first complete area took several hours to get through, and there are plenty of hidden treasure chambers to discover, with most of those being fairly substantial, as well. Combat works well enough, though it needs more polish (just like the rest of the game.) It doesn't have the sort of buttery smoothness that the best action titles have, but it's more than serviceable. There have been a few crazy difficulty spikes though, and the life system relies on the player collecting vials of magic potion. The distribution of these has been a bit of a problem… it seems to go back and forth between having far too many, or none at all. I would have much preferred a regenerating health system, but it's not a huge issue.

In general there are a load of rough edges and weird things, but nothing game-breaking so far. In fact, it's been pretty enjoyable… however, I will say that I've been playing co-op the entire time, and I'm not quite sure how much I would be digging the experience if I was going through it on my own. If every level ends up being as large as the first one, it may be a case of too much content, BUT it's still holding my attention at the moment.

…And really, like I said before, this game is totally better than Brink. Bethesda backed the wrong horse in this case.

In other games news, I've seen little bits and pieces of an alleged Monster Hunter iPhone game, only to find out that not only is the game real, it's already available for download!

Above is a quick video of what Monster Hunter Dynamic Hunting looks like… it's definitely a "LITE" version of the other games, but it retains the basic elements while shifting things more towards a pick-up-and-play, action-heavy direction.

Basically, the player can pick from one of three weapon types (sword & shield, dual swords, or great sword) and each level completely forgoes any harvesting of natural resources or wandering around through wilderness areas. Instead, each target monster is directly in the center of the screen and the player must attack, dodge and counter as if it was an encounter in a small arena. Monsters telegraph attacks with little flashes of light, and a successful dodge awards a super-attack that can be used in addition to standard strikes.

At the end of each mission, resources are awarded and the player can choose to create new weapons and armor, or upgrade what they've got. Once that's done, you head back into another mission and keep on collecting more resources.

Each battle happens extremely quickly, no more than a few minutes each and the difficulty in general is a lot lower than the "standard" versions of the game. I blew through the first five monsters like they were nothing before going to bed, and although this is definitely not as in-depth as satisfying as the big-boy Monster Hunter games, I can see myself logging five minutes here and ten minutes there when I need to kill some time.

I'm going to be a little bold here and say that I did not find Torchlight to be nearly as fun or exciting as most people did. In fact, I kind of lost interest before finishing the demo on XBLA, which was a real disappointment considering how long I had been waiting for it to come to consoles. With that being a bust and no hard info on a potential console version of Diablo III, it seems to me that there is still a dungeon-crawling niche that needs to be filled.

Apparently, from the one screenshot that's been released so far, Crimson Alliance is looking to potentially plug that gap. Not a lot of info right now, but I am a fan of the genre (if indeed this game falls within it) and if someone can really nail that formula down, I'm there.

The wife and I have been watching Firefly over the last two weeks, not quite an episode a day, but close. As of tonight, we only have three episodes (plus the feature film Serenity) left. At this point, I can see why people took the show's cancellation so hard.

I'm not going to say very much about it or start waxing poetic, but I will say that we have greatly enjoyed everything about it and I will be genuinely sad to reach the end of the series. The performances really start to come together after just a few shows, and every installment has been solidly entertaining.

Special kudos go out to Nathan Fillion for doing such a fine job as lead character Mal Reynolds, too… his awkward nuances and self-conflicting attitudes bring the role to life and give depth that grounds the entire show.

Anyway, it's a real shame that the show had such a short run. I can think of a million programs not even a fraction as good as this one that went on for season after season, but I guess that's the way it goes. No one's ever accused a TV network of having good taste.

From what I hear, ‘better than Brink’ isnt much of a compliment. I dont know if im just getting bad at games, but the second half of “Hunted The Demons Forge” seemed overly difficult. I have not seen this mentioned once by anyone else, so it could just be me. As someone that has bested both Gears of War games on their hardest difficulty, I found Hunted very taxing on its easiest setting. (I played the game exclusively as the archer, except for the part of the game where I was forced to play as the melee character). The sear… Read more »

Hey Scott. Yeah, I’m not a fan of touchscreen in general. Like you said, I find that very often my fingers are obscuring what I’m supposed to be seeing on screen, and the controls are never as accurate as I would like. I don’t think I’ll ever find myself to be a touchscreen convert, but there are times when I have five or ten minutes to kill and I’m sure you know what a Monster Hunter nut I am. I popped for it since it was only five dollars, but like I said, it’s pretty LITE… I don’t see myself… Read more »

Hey Brad – the resident GC Monster Hunter guy! I hadn’t seen the iPhone MH title in awhile so I’m surprised it’s to the point where you can already play it. I must say, after watching the video….while I’m all for new MH titles in the franchise, the touchscreen setup drives me bonkers. Just pay attention to the amount of screen real estate is being taken up by fingers hovering, swiping and tapping the glass. That, to me, is rather unacceptable. I would much rather see this on the 3DS or perhaps having the display in portrait mode and having… Read more »