Living It up with the Undead 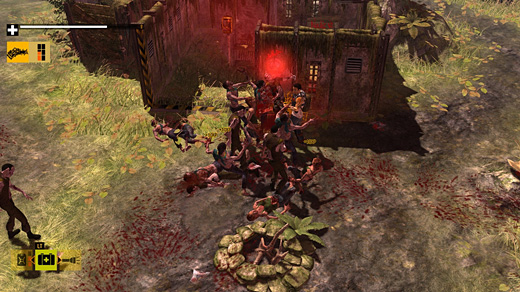 HIGH Testing out feathered arrows on a compound bow.

LOW The ill-conceived fetchquest at the end of the game.

WTF Zombie deer are the deadliest creatures on the islands.

I'm not sure who's in charge of selecting the titles 505 Games publishes, but whoever's calling the shots is doing a damn good job of picking 'em. I've heard nothing but good things about Payday 2 and Terraria, Brothers: A Tale of Two Sons was one of 2013's best, and now comes How to Survive

—another clear winner. 505 must have learned a lesson after the miserable Naughty Bear, because they've hardly missed a beat since.

How To Survive is an action-heavy zombie survival game viewed from a top-down perspective. The player begins by selecting from one of three available characters, who then promptly washes up on the shore of an island infested with the undead. There are a few living people left to offer quests, and it's also encouraged to wander around and explore.

While the game initially appears to be arcade-style action reminiscent of Diablo, there's more to it than that. How To Survive places heavy emphasis on finding enough food and water to keep the player's character in good health, and also offers a surprisingly deep crafting system of taking random bits of junk and turning it into potent weapons. Using a wooden stick to bash in skulls is alright, but wielding a high-powered bow made from a mudguard and fishing line is far more empowering.

The formula here is a solid one and I'm certainly inclined to enjoy games where survival plays a role, but the thing I like best about How To Survive is that the developers have made a lot of smart decisions and turned out an experience that feels like it's exactly the right size for the sort of project it is.

For example, the islands the adventure takes place on are small enough to be manageable, but large enough to make it foolish to go from one end of the other without being adequately prepared. There are enough quests to keep the player busy, but they never feel overwhelming. There are plenty of pieces of equipment to craft, but it's not hard to keep up with the various formulas and components. Nearly every part of How To Survive is exactly as deep as it needs to be, while maintaining a scope that's prudently modest for a small dev house. 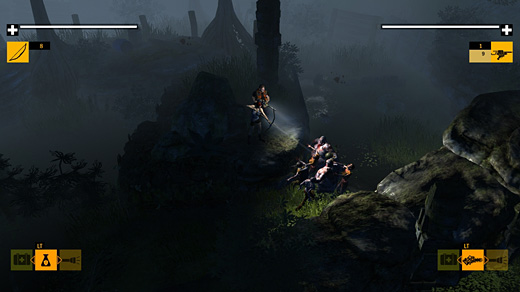 That's not to say that it feels cheap or bare-bones, though. Take the graphics, for instance. There was a surprising amount of animation and detail to be seen—I wouldn't have blinked at less, but I was pleasantly surprised by the smooth motion and the array of killing blows delivered by melee weapons. It was also satisfying to see that every piece of equipment I crafted was visibly represented on my character. The reinforced helmet looks different from the normal helmet, and it's obvious to see the difference between a character who's wearing armguards and one who isn't.

Working my way from area to area and from island to island, How To Survive offered a great balance between straight-up zombie-killing action and a cautious approach that encourages judicious use of resources. (PROTIP: Pick those arrows back up after they're used, folks.) It's also important to keep a close eye on the character's exhaustion levels, and getting caught away from a safe sleeping area when fatigue sets in makes things quite a bit more difficult. It may look like standard action, but players who throw caution to the wind will find themselves zombie chow in short order.

While the content here strikes a heartily satisfying amount of correct notes, there are certainly some areas that need improvement. For example, while the game shipped with a couch co-op function, online co-op is being patched in at a later date. It's a shame that this feature wasn't ready out of the gate, because it's screaming to be taken on with a friend.

Smaller aspects need a tweak, as well—things like finding typos in the dialogue, or how only some of the items in the inventory screen were able to be rearranged. I eventually figured out a way to juggle them, but it's a simple oversight that should have been caught. The game also doesn't let players sleep unless the character is at least 50% tired. Considering that it's deadlier to travel the island at night, being able to advance the clock with a quick nap here and there would have been appreciated.

Otherwise, characters have a limited amount of inventory space, and it's a bit of a pain to have to drop some things before disassembling and then reassembling a weapon when a new component is found. None of the items are lost in this process (hallelujah!) but for a game which places so much emphasis on crafting, this process could have been more elegant. It's also irritating that the map doesn't show where non-quest items have been left, so backtracking in search of that metal tube I had to drop fifteen minutes ago is a downer.

These rough edges don't take much away from the overall experience, though. How to Survive

is a great adventure from start to finish, the ending was great, and I can't remember the last time that I enjoyed collecting wooden sticks, seagull feathers and protein-rich roots as much as I did here. Although some may say zombies have overstayed their welcome as the villain-du-jour, Eko Software and 505 show that there's plenty of life in these corpses yet. Rating: 8 out of 10.


Disclosures: This game was obtained via publisher and reviewed on the Xbox 360. Approximately eight hours of play were devoted to the single-player mode, and the game was completed. No time was spent in multiplayer modes. (Only local co-op was available at the time of review.)

Parents: According to the ESRB, this game contains intense violence and blood and gore. Parents, this one is not appropriate for little kids. There are frequent uses of salty language (oddly, not called out by the ESRB) and the game is not shy about blood and gore when zombies start falling victim to the player's chainsaw. The end of the game is a total bloodbath! It's clearly aimed for older teens and adults, so steer the wee ones clear.

Deaf & Hard of Hearing: All dialogue is accompanied by text, so the story is easily accessible. In terms of game play, there are occasional a areas where zombies can be heard but not seen, giving players with full use of their hearing a bit of an edge. It's not enough of a factor to make the game unplayable by any means (the overhead third-person camera really helps in this aspect) but gamers with hearing impairments will need to be extra vigilant.