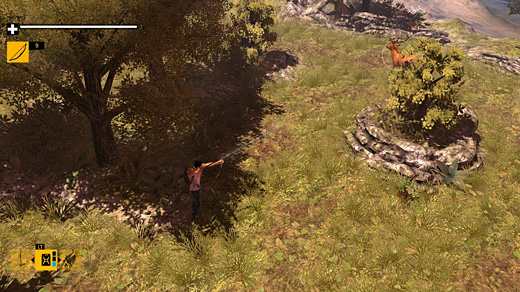 If you haven't been paying close attention it's probably been pretty easy to miss, but I would like todraw your attention to a recent Xbox Live Arcade (XBLA) to release called How To Survive, from Eko Software.

In a nutshell, it's a zombie survival game that takes place on a small chain of islands in the tropics. It looks a lot like Diablo with a similar top-down perspective, and feels a bit like it, too. However, the game places quite a bit of emphasis on finding food and water, and also hosts a respectable crafting system which allows players to create different sorts of weapons and armor (which actually show up visibly on the character) from random bits of junk.

I completed it last night and had a blast from start to finish. The developers have created a very balanced product that feels like exactly the right size for something on XBLA, and there are loads of little nuances and interesting details that show it was created with love. (Also, I'm a big fan of that ending.)

My review is in the can and should be out soon, but in the meantime, I could easily say that How To Survive is recommended. 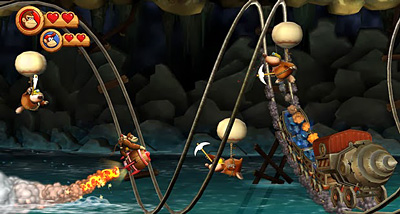 I'm sure this is old news to a lot of people, but I started and finished Donkey Kong Country Returns 3D on Nintendo 3DS last week, and to my complete surprise, I thought it was magnificent.

I was never a fan of the original Donkey Kong Country on SNES (Admit it! The only thing it had going for it was snazzy graphics!) so I expected something along the same lines here, but I couldn't have been more wrong.

Although it follows the same basic formula of a giant ape platforming from left to right, the developer has wisely stripped a lot of the crap out and boiled everything down to a refined, core set of mechanics. Diddy Kong acts as a hover-jump power up, the rhino makes a return in a few levels for some crate-busting action, but otherwise it's all about mastering timing and jumps in beautifully-designed levels.

It's pretty rare for me to do, but I actually completed every single level in the game because I enjoyed going through them so much. There were definitely a few hair-pullers, but overall they struck a great balance between challenging and interesting design, and every level seemed to offer at least one or two things that changed it up.

People tell me that the 3DS version is the way to go since it removes any of the waggle that was required of the console version, so that makes sense to me. Either way, this one is definitely recommended.

Although I'm not very far in either, just a quick mention of both Phoenix Wright: Ace Attorney—Dual Destinies and Batman: Arkham Origins.

The original Phoenix Wright Trilogy (and specifically, the first game) are some of my favorite titles of all time, but as the series went on, it was pretty clear that the developers weren't able to keep the high standard of quality that I expected, and I lost interest in the series. Capcom decided to give it one more shot, though, and so far it seems like they are back on track.

I'm only in the first case at the moment, but the graphics are super-sharp, the music is great, and the courtroom action has been satisfying. Of course, a lot depends on how the story develops, but at the moment, I'm feeling hopeful.

I'm also at the very beginning of Arkham Origins… I just started tonight (for review) and despite a lot of negative talk in reviews and on twitter, I'm liking what I've seen so far. If nothing else it starts off better than Arkham City did, with a more measured pace and fewer things hitting the player all at once. I'm also really interested with the premise of the Batman being hunted by at least eight different villains who are out to collect a $50,000,000 bounty on his head.

Like Phoenix, a lot will depend on how the game goes, but this beginning feels like it has its pieces in the right place. That said, I've seen quite a few mentions of bugs, and at least two or three different people having problems with corrupted saves causing hours of progress to be wiped out.

Fingers crossed on both of these. 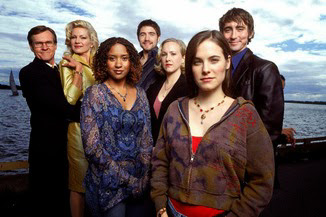 The wife and I just started a new (old) series called Wonderfalls. It only ran for two-ish seasons, and the entire series can be picked up at Amazon for something like $18. For fans of Better Off Ted, Dead Like Me or Pushing Daisies, it's great stuff…

The gist is that a slacker girl working in a gift shop near Niagara Falls starts having inanimate objects speak to her, and they give her cryptic clues about people nearby. If she doesn't follow their direction, they annoy her incessantly, so she's often doing their bidding against her will. The show isn't nearly as sinister as that sounds, though… The clues usually lead to someone in need of help, although the path the main character takes getting there is often a circuitous and embarrassing/painful/humiliating.

The writing is sharp and the cast is strong. I can understand why it didn't last long on television since it's pretty quirky and smart, but we've been digging it so far. Recommended.

Ever since seeing Rebel Wilson in a few recent movies, the wife and I have been fans of her high-energy, high-confidence performances. There really aren't that many girls of size in Hollywood, so to see her pop up so often and in such enjoyable roles was a pleasure. As such, we've been tuning into her new network show Super Fun Night, but although it started off with a decent first episode, it's been more and more disappointing ever since.

Honestly, I think the writers are going in the absolute wrong direction. Rather than showcasing Wilson as a strong person with self esteem and value, they quickly reverted to a constant string of food-oriented jokes and portraying her as more and more of a loser.

Even worse, I thought it was great that she seemed to have a potential love interest with the main male character of the show, but it quickly died off as he paired up with SFN's "hot but emotionally empty" girl despite his apparent distaste for her at the start. I'm guessing from the latest episode that the writers are intending to break that off and eventually have his character hook up with Wilson's, but it's pretty lame that he couldn't be interested in her until after testing out the "hot" one. I mean, what's the lesson here? That men are never interested in bigger girls, or that bigger girls should be content with picking up someone's sloppy seconds?

The whole thing is just disappointing and frustrating, and it seems like a horrific waste of Wilson's dynamism. I'll still support her as an actress since I think it's way past time for Hollywood to break its obsession with alarmingly-thin actresses, but I can't really get behind a show like this that seems to be plowing ahead with the same old tropes and stereotypes.