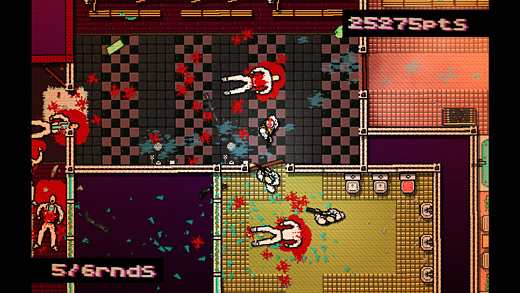 I finally got around to playing Hotline Miami yesterday.  I've had my eye on it for a while, but I knew it was coming to the Vita, so I held out. I'm glad I waited, but to be honest, it's been a very hot/cold experience.

When things are going well, it really pops. The feeling of sneaking around a corner and taking out guards is great, and walking out of a building after a "job well done" is quite satisfying. However, things only go well a small fraction of the time, and only after many, many retries.

I don't know how it handles on PC, but on the Vita it controls like a greased-up squirrel tweaking on meth. The unit's sticks have never been my favorite, and those combined with the general control layout, the super sensitive/specific shooting mechanics and the lightning-fast reaction of the enemies make for a fairly high level of frustration. It's great that the developers allow retries almost instantaneously, but I'd rather see some polish applied to making it handle just a little more calmly.

The AI can also be fairly maddening—the game randomizes certain things including weapon drops and enemy behavior, so just when you start to get into a good pattern for clearing out the floor, things change up and your best-laid plans go out the window. I guess it makes sense in a way since it can be seen as a vaguely equivalent to the random behavior of the people that would ostensibly be hunted, but it drives me crazy to see stuff like an enemy acting totally oblivious in one run, only to have super-sharp hearing in the next.

I have to say that I really didn't care for the game very much in the first few levels, but I've heard so many people praise it that I was compelled to push on. Now that I'm much further in, I can see the appeal—there's definitely something about the way the various elements of the experience come together and like I said earlier, when things come together it really pops. A slightly lower level of aggravation would be appreciated, but I'm hanging in there.

Just a random tidbit here, but I've heard a few developers lately talking about why they are in favor of DRM and getting rid of used games. I know this is a huge discussion and I don't really want to get into every aspect of it right here, but there are few things I need to get off my chest:

1. If there are no used games, then sales of new games are going to go down, period.

I don't have hard numbers, but my gut feeling is that the very large percentage of the game-playing audience won't be able to drop $60 as often as the industry thinks they will, and when they do, it will likely only be for titles that they see as "can't miss" projects. For those developers who are taking risks or who are an unknown quantity, don't expect to sell a million at full price.

2. If there are no ways to buy and sell used games, developers are going to go out of business even faster than they are now.

Why do I say this? It's simple—if I buy Gears of War digitally, then Epic made their money. Hurray for them. The buck stops there.

However, if I had bought it on a disk (or resellable digital) then I could trade that in and kick in a few bucks to buy Batman. I wouldn't have been able to buy it outright, but with my used game defraying the cost, I can. Oh look, Rocksteady just got paid. And if I can trade that in after I'm done, I can knock down the price of my next new game, and pick up The Last of Us. Hey, check it out… Naughty Dog just got paid.

By my count, that's three developers who got paid with a consumer like me taking part in a used game ecosystem.

In a scenario where used games don't exist and all sales are final, Epic would've been the only one to make a buck and those other two studios would be left with a big fat zero.

3. I've heard some developers say that used games need to go away so that the increasingly-large budgets needed to create games can be sustained.

As we are currently seeing (and have been seeing for a while now) there are very few blockbuster-sized games that are able to make a return on the investment needed to craft them. I'm not sure what kind of business thinking has led to this "go big or go home" mentality, but it's incredibly poor business practice to put so many eggs into so few baskets and then hope and pray that an unreal number of copies will be sold in order to turn a profit.

I'm not a developer but I do know about business, and the way I see it, if there's no realistic way to make a profit on a huge game, then you need to make a smaller game. Additionally, I eagerly look forward to the day when this fallacious stigma about releasing games for less than $60 at retail will go away.

I don't know about you, but I'm way more inclined to pick up three games for $20 or two games for $30 than I am to pick up just one for $60. And I'm not sure where this idea that anything less than full price is guaranteed to be a crappy game, but it's ridiculous and I believe there are lessons to be learned from other media—in most other businesses, lower price leads to selling higher volumes, and when managed properly, higher volumes equal higher profits.

I've got a lot more to say on these topics, but that'll do me for now.

[quote=James]At some point gamer’s need to realize that this is a tech driven expensive hobby. Some people are going to be priced out of the hobby if the industry is going to keep moving forward. I have to be very picky about what I buy and I just accept that. Used games and steams sales train people to wait and spend as little money as possible on games. If games are truly overpriced then gamer’s need to stop buying games and let the industry feel the heat. Buying used games helps out the retailer you bought it from, and that’s… Read more »

As someone who has been heavily invested in games and the culture surrounding them for the majority of his 34 years I would be sad to see the video game industry collapse. My heart would also go out to the countless jobs lost and lives burdened by such a situation. That said, if the game industry is unable to figure out an economic model that works, well, I’ve got a backlog that will take me years to get through. We’re in the era of digital distribution, DLC, multiple platform publishing options (from PCs to home consoles to handhelds to mobile… Read more »

At some point gamer’s need to realize that this is a tech driven expensive hobby. Some people are going to be priced out of the hobby if the industry is going to keep moving forward. I have to be very picky about what I buy and I just accept that. Used games and steams sales train people to wait and spend as little money as possible on games. If games are truly overpriced then gamer’s need to stop buying games and let the industry feel the heat. Buying used games helps out the retailer you bought it from, and that’s… Read more »

I hear what you’re saying, but the fact is that most of the discounted games sold as used wouldn’t translate into $60 new sales if the used option was gone. Like I said above, I think a lot of the used game sales would be circumvented if publishers had varying price points that more accurately reflected their perceived value. All those games being sold half-price at $30 with GameStop profiting could be the publisher profiting if they’d be more realistic about their sales expectations and sell certain new games AT $30. Also, the only reason GameStop has used copies to… Read more »

Your argument about selling used games to buy new ones would be solid if the used games market stopped at the retailer buying the used game, but they also sell them, too. What’s to stop you from buying used copies of Batman and The Last of Us? You could easily turn your scenario into zero developers getting paid by just buying used all the way. And why wouldn’t you? You would have saved somewhere in the area of 15 – 25 bucks by doing so. Accounting departments actually prepare for the “zero developers getting paid” scenario over yours. The second-hand… Read more »

And again I wonder aloud what happened. In the PS2 era, developers finally began to discard the one-price-fits-all mentality for disc based games, and it was wonderful. Come this gen, its like I might see one “budget” (and by budget I mean $50 instead of $60) game per year. It’s like they didn’t learn anything.

I agree with your “no used…” scenario Brad, but disagree with the assertion that variable pricing would circumvent the used game market. Gamers were trading games before the $60 price ceiling, so I don’t see how variable (lower) new game pricing would deter anyone. After all, money is money, so I think you might see a used game ecosystem with more strata, (gamers trading in $30 games for $30 games, etc.) but the idea that Gamestop wouldn’t be willing to resell lower priced games is nonsensical. The other issue with variable pricing according to perceived value is it begs the… Read more »

i don’t think it’s about converting every buyer into a 60$ consumer. it’s about getting the money gamestop currently gets out of the used games market. You bought three used games, three publishers got paid? Sure, but not from you. The publishers got money from the original buyer. But after he returned it to gamestop for another game, every new player only pays indirectly the original buyers hobby but also leaves some extra money for the service gamestop provides. Theoretically removing the ability to buy used games, would certainly change the stream of money. But i don’t think the money… Read more »

Hi Brad, and thanks for fighting the good fight. As someone who works in economics, I’d like to add something to your point. The issue with all those used games arguments is basically that they don’t take into account the fluidity of costs, that tend to, in the end, have repercution on the same basiuc variable. What it means is that any enterprise to make the consumer pay (wether it is online passes on barring used games alltogether) in the end is just equivalent toraising the prices of new games. If you put an online pass you diminish the value… Read more »