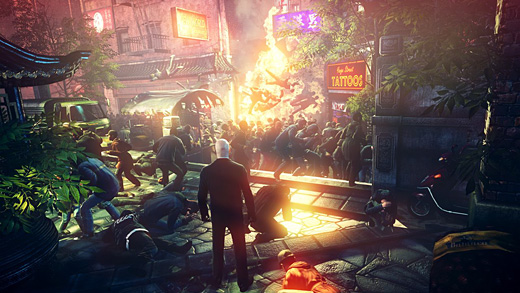 HIGH A handful of missions have the genuine "Hitman" feel.

I've held the Hitman series in high regard since 2002's Silent Assassin. The uniquely open, free-roaming levels and a focus on performing precise, untraceable kills were an experience offered nowhere else. After eagerly awaiting another installment for the last six years, I'm now in the unhappy position of reviewing Hitman: Absolution

—a game that tries to capitalize on the franchise's cachet while delivering a poorly-designed, inconsistent and often absurd experience that fails both as a sequel, and as a game in general.

This latest entry puts the player back in the shoes of the iconic Agent 47, a genetically-enhanced killer-for-hire known for snappy suits, a bald head, and a barcode tattooed on the back of his skull. Agent 47's been sent to end his former handler, but before she dies, she makes him promise to care for a girl freed from the same agency that created him. He does, the girl is promptly kidnapped, and hijinks ensue.

Hitman's appeal has had little to do with storytelling despite repeated misguided efforts, and that holds true here as well. The plot is subpar at best, and embarrassing, vile nonsense at worst. Ironically, with all the effort put into the cutscenes, the game does a terrible job of explaining why each target is a target. Without text briefings in the pause menu, I would often have no idea why some of these people needed killing.

However, as stated, the series has never been about narrative. The juiciest bits have always been about scoping out the territory, freely crafting a plan of attack, and choosing between sniping a target from hundreds of yards away or poisoning their sushi with no one the wiser. Unfortunately, the developers either didn't understand how the series worked in the past, or they didn't have the chops to make it work now. There's an absolute litany of problems on display in Absolution, and they come together to create an experience that misses in every conceivable way. 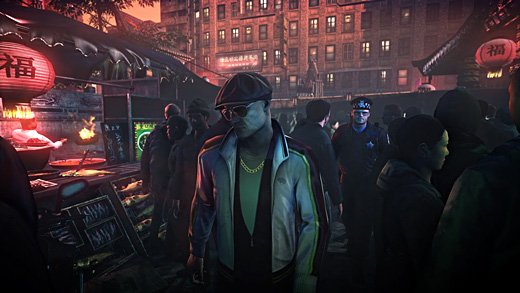 The most obvious offense? In every corner of every level, the developers have placed huge boxes used to hide bodies, or sometimes, even 47 himself. Anywhere the player might kill someone or need to disappear, there's a box. Not only is it absurd to create a world in which incongruous crates litter the landscape, this plentiful corpse storage just props up poor design, giving the game an "Assassination For Dummies" flavor. Straining believability further, it's impossible to shoot out of these things when peeking from inside. I suppose it was unavoidable, though. If 47 went sniping from box to box, he'd be unstoppable because enemies never check inside unless he's spotted going in.

A bigger issue is Absolution's thoroughly busted disguise system. The Hitman series has always been notable for letting 47 masquerade as innocuous people who live or work in a target's area, giving him the ability to sneak around and plant explosives or saw through chandelier cables without raising suspicion. This time around, being disguised is more of a liability than an advantage.

When passing as a security guard, for example, 47 can walk through most areas unnoticed by all except other security guards—his "coworkers" will question him, and try to determine who he is. This makes sense since regular staff wouldn't be fooled by a newcomer. However, this limited quasi-invisibility is totally borked in two major ways, and it's worth noting that at the time of review, the developers were considering a fan-requested patch to this system.

First, when disguises incorporate a face-obscuring mask or helmet, 47 won't wear it, even if every other enemy in the area is doing so. If the point is to remain unidentified, why does he waltz around with his head exposed? The second point of malfunction is that the AI is eagle-eyed and psychic. Similarly-dressed NPCs see through 47's disguises even if he's minding his own business with his back turned a mile away. In one memorable instance, I was dressed as a chef in Chinatown. Another chef from a competing restaurant raised the alarm while I was doing nothing but calmly walking through a crowd of several hundred people. 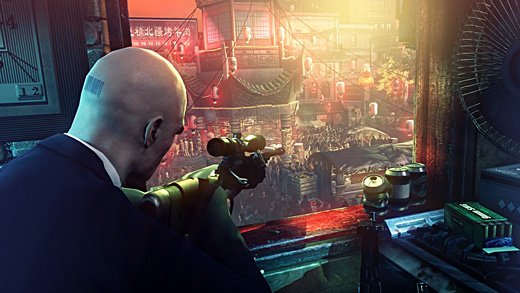 As nonsensical as that is, what's even worse is that by bending over, 47 can evade anyone. In whatever alternate universe this game is set in, it's far more effective to duck behind a piece of furniture or a box than to act nonchalant and blend in with goings-on, despite how ludicrous it looks at close quarters inside a home or office. Ducking is so potent, in fact, that a guard staring straight at 47 from a few feet away will immediately forget him and resume his patrol the instant the player takes cover. Mastering this comical furniture-jockeying is needed if 47 wishes to pass through levels unseen, and it's as unconvincing as it is ridiculous.

Compounding all of this is that the majority of the campaign suffers from narrow, congested levels that make stealthy surveillance of targets nigh-impossible. It's extremely difficult to stay under the radar in small places choked with enemies, and the temptation to bulldoze through by running-and-gunning is high despite the goal being to kill the target, and no one else. The last thing gamers need is another cover-based shooter, so the restrictive design and linearity of these areas doesn't match the title's ostensible aim.

Besides what I've already outlined, there are even more issues that take away from any potential satisfaction—things like having equipment repeatedly stripped away at the beginning of each level, oddly-spaced checkpoints that don't save everything that's been done, being blocked because 47 can't hop over shin-high barriers or drop down small ledges, being unable to leave an area because a guard nowhere near the exit is on alert and the doors are magically locked, or being stymied by enemy characters that react unrealistically. Attempting to distract goons at a backyard BBQ by electrocuting one of their comrades doesn't disturb them in the least. Don't try to punch a guard on a lonely upper balcony, though—everyone in the building will come running.

While there are a few sequences that thrill the way a proper Hitman should, like stalking a dark cornfield or combing Chinatown without being dressed as a chef, these brief glimpses of 47's predatory roots are outnumbered three-to-one by kludgey segments more about duckwalking towards exits than they are about killing professionally. I would imagine that the goal of Hitman: Absolution

was to take Agent 47's detailed, methodical gameplay and make it appeal to players more familiar with modern action/stealth hybrids, but all the devs have done is eviscerate their unique franchise with poorly-implemented mechanics and left him to die an awkward, humiliating death. Rating: 3.5 out of 10.

Parents: According to the ESRB, this game contains blood and gore, intense violence, partial nudity, sexual themes, strong language, and use of drugs.  Parents, I think it's pretty obvious that this game is not intended for children based on its title alone, but in case you were on the fence about it, let me reinforce the fact that this one is adults only. There is a ton of salty language, there are mostly-naked strippers, the killing can be quite graphic, and there are a hojillion other things here which are totally inappropriate for young ones. Moms and dads, just say no.

Deaf & Hard of Hearing Gamers: Sound plays an unusually vital role in this game. Without being able to hear, it's very possible to overlook enemies which are partially obscured, or tucked away out of sight. There is an on-screen radar which shows their presence, but I found that the audio definitely helped. Also, enemy characters often have conversations which reveal clues or other information that can be helpful. Most of these conversations are subtitled, but some are not.

Hitman Absolution is the worst Hitman game by a country mile. It was like someone played Hitman games and went ‘let’s not play to any of the game’s strengths, also we need some sexy nun assassins’ Much respect to Carlos, but it seems to me he likes this one because he doesn’t like traditional Hitman games, and that is fine. But with the rest of the Hitman entries being such a unique voice, making it more like every other third person action game is not something I would ever have wanted to see. And yet there we were with Hitman… Read more »

As we discussed on the So Videogames Podcast, I think Absolution is great, and felt compelled to add my thoughts here. On a 9 year old review. How I remember it (and yes, I need to replay the game when the remaster comes out) I felt 47 to be more mobile, and the game itself to be a bit more action-y. Which I dug. I loved being stealthy when I wanted, but then also to go guns blazin. I still end up doing this most of the time in other Hitman games, but in other titles I always felt 47’s… Read more »

Peronally Hitman Absolution was my game of the year having played all of the previous Hitman games to completion. One solid point against Absolution would be that there are missions where there is no target to kill. This is because this game has stronger elements of story telling mixed in. Each level is part of a continuous story as opposed to having them all feel more disjointed. I didn’t really care much for the story or the little girl you had to save. But I loved the scenarios that the game created like the bar fight level or the level… Read more »

The review sounds rather harsh, but reflects my own experiences pretty well. There were some sections and even entire levels that were absolutely brilliant, but they were bogged down by too many problems with the most basic gameplay mechanics. I loved using various disguises in Blood Money, in Absolution they are pretty much useless since everyone with the same jacket on has psychic powers. In one case I was spotted by some random guy in a cleanroom suit through a gap between a bunch of lockers immediately, even though I stood with my back to him, resulting in the security… Read more »