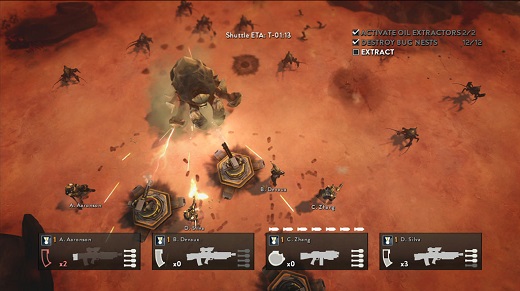 HIGH Unleashing my mech suit for the first time.

WTF Why don't more devs include female models like these?

Taking the time to polish non-essential aspects of a design and adding nuances that others overlook not only shows a developer's love for what they're doing, but also helps sell that same love to prospective players. To paraphrase a well-known saying, the awesome is in the details.

Take Arrowhead's Helldivers, for example. It might not seem special at first glance—really, do we need another space marine shooter? But, after just a few minutes, the quality that makes it such a standout experience is revealed.

At its core, Helldivers is a gun-heavy combat game shown from a Diablo-like top-down perspective. Players start with an assault rifle and supporting equipment before being dropped from orbit. Once their transport pod slams onto a hostile planet, they emerge to complete simple objectives, kill anything that gets in their way, and then extract at a prearranged pickup point.

It seems pretty straightforward, and it is. So where's the awesome? Like I said, it's the details.

While it's possible to get through a large chunk of the game playing solo, Helldivers is primarily meant to be a multiplayer experience. Lone wolves will find that they'll have to use stealthy tactics to survive, but there will eventually come a point where even the strongest soldier won't be able to cut it alone. The odds are just too heavily stacked.

Thankfully, the developers make it incredibly easy to play with others. Before each mission, the player can join up to three friends on the same couch or can go online to join raids already in progress. Although I'm not usually big on multi, Helldivers offers absolutely no benefit to trolling others. As such, I've had a string of great experiences with randoms who were focused on winning just like I am, and seeing someone scream down from the skies when I need an assist is always a welcome thing.

Whether solo or in a squad, a large part of what makes Helldivers stand out is the level of lethality it sports, and how few margins of error it affords to players.

As in any other game, it's normal to expect that the alien enemies are out for blood, but friendly fire here is always on, so other teammates can be just as deadly. Not checking targets or being too eager to toss a grenade will end a squad in a heartbeat. Taking one extra second to decide whether to fire changes the quality of the skirmishes considerably. 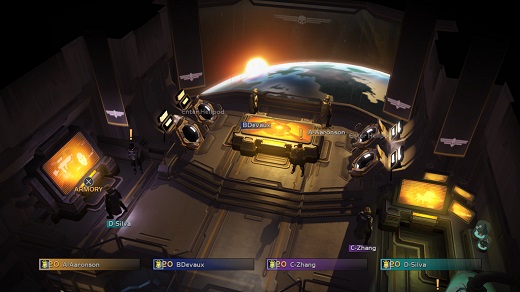 There are other perils as well. Helldivers lets players call support drops from their ships in orbit—everything from more ammo to hulking mech suits and armored APCs with room for four. With this sort of backup on-call, it seems like players will be unstoppable… Until a pod carrying reinforcements slams into them from above and turns them into paste, or when a defensive autoturret cuts them in half while shooting at an enemy. This omnipresent tension ratchets everything up, requiring players to have full situational awareness at every moment.

This heightened danger by itself wouldn't ordinarily be enough to sell me, but what makes the death rate tolerable—and even a non-issue—is that there's considerable depth in the overall design that rewards players who take advantage of it.

Helldivers has such a wide array of equipment, perks and upgrades on offer that it's possible to concoct a different strategy for every situation. On a snow planet where deep drifts slow travel to a crawl? Call down a vehicle and taxi troops from place to place. Getting overrun by bug swarms? Equip a jetpack for quick escapes. Have to defend a point for what feels like an impossible length of time? Equip a brace of airstrikes while a teammate carries extra ammo or a flamethrower. All of these nuances enhance the combat formula, and then the attention to detail makes it all sing.

Changing a clip discards the ammo left in it, and the animation must be completed before the gun is reloaded. As such, choosing when to perform this usually-simple act becomes a highly strategic decision. Carrying a heavy suitcase filled with vital intel changes the speed and gait of the courier, while also limiting them to single-handed weaponry. Jumping out of an APC before it comes to a complete stop means that it rolls right over (and likely kills) the exiting pilot. When the player calls up a mini-map, the player's avatar stops on-screen and opens their own map, giving navigation a significance and connection to the player that it doesn't usually have.

There are a thousand little things like this that don't have to be here, but because they are, they all combine into something far greater than the average shooter's design. Helldivers requires players to think, and in the world of shooters I find that to be quite special.

Technically, the game is deceptively amazing. While the graphics seem simple or even under-detailed, what the team has done is quite brilliant. With the number of potential players and enemies on-screen in hectic firefights, the game manages to stay amazingly readable. It's always clear about what's going on and communicates a lot of information in a short period of time while still being stylish and distinct. The Helldivers themselves are also pleasingly iconic in appearance, and the opponent types are easily discernible and well-realized.

There's not much story here (defend Super Earth from three alien armies!) but the developers have a subversive sense of humor and play off of the hyper-jingoistic tones that one might expect to see in a more straight-faced title. Hearing soldiers scream "Taste democracy!" as they blow the opposition to bloody bits never stopped being clever, and the tone is set perfectly.

I also want to give a huge amount of praise to the devs for implementing female characters. In Helldivers, every soldier is covered from head to toe in armor. Rather than making up some tired excuse about needing separate animation rigs or how much work it is to implement females, Helldivers simply changes a couple of small details on the armor, uses different voice samples, and voila! Instant female characters. I absolutely applaud the straightforward inclusion of both sexes in a no-nonsense, get-it-done way, and it's a perfect fit with the game's world—who cares if you're male or female, get down there and kill things!

In terms of criticisms, the only things that stood out were on the technical side: I've heard of players having difficulty syncing their data between platforms (the game is cross-buy between PS3, PS4 and Vita) and I did notice some occasional weirdness myself—my son lost a few of his unlocks while he was playing a game I was hosting, I've had a fair number of disconnections with online partners, and so on. None of it was especially egregious, and the devs have already announced that fixes are on the way.

While it may not look like much on the surface, Helldivers has a hell of a lot going on once players dig in, and being a disposable interstellar trooper raiding death planets has never been more perfectly captured than it is here. I'm not overstating the case when I say that this is one of most enjoyable multiplayer games I've ever gotten into, and I've got nothing but praise for this project. My hat is off to Arrowhead Game Studios, and whoever made the call to snap this up as a Sony exclusive was an absolute genius. Simply superb. Rating: 9.5 out of 10.

Parents: According to the ESRB, this game contains: violence, blood and gore, and mild language. The game is built on mowing down hordes of enemies, so expect tons of gunplay and a jillion aliens to get splatted. When downed, soldiers bleed out and players leaving the game commit explosive suicide. It's not uber-graphic, but there's definitely some gore. The language is negligible, just a few mild expletives in the heat of battle.

Deaf & Hard of Hearing: All dialogue (what little there is) is subtitled. Gameplay does not rely on audio cues, but the "reload now" metallic alert sound is extremely helpful during heavy combat. Players who can't hear it will have to pay extra attention to their on-screen ammo counter.