Play what you're dealt 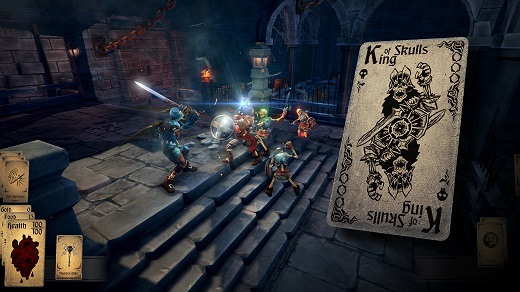 LOW Starving to death four times in a row.

WTF Where's all this technical choppiness coming from?

When I was younger, I played a fair amount of Dungeons & Dragons. I used to live across the street from a guy who had all the books and liked to run campaigns, so there were plenty of days when I would walk over for afternoons of dice-rolling adventure. It was good times for sure, but now that I'm a grown-up with a family, a job and other responsibilities, it's tough to find a way to indulge that same sort of in-person lazy-day pastime.

While Defiant Development's Hand of Fate isn't exactly the same thing as D&D, it captures the feeling of what it's like to play tabletop with someone, and that's quite an unusual thing. That fact that it's a fantastic game only makes the experience even more attractive.

As Hand begins, the player finds themselves sitting across from a sinister fortuneteller. He extends an invitation to play his game, dealing fancy, tarot-like cards in various patterns on the table before him. These cards go face-down, and make up the "dungeon" that the player goes through. When the player moves through this dungeon one card at a time, they're turned face-up to reveal various encounters; enemy ambushes, friendly townsfolk, a shop, a crypt, a blessing, a dark horror, or any one of a wide variety of situations, and each reveal must be resolved before the player can move on.

Non-combat cards rely on the player's luck to choose a correct outcome (Give the priest 5 food, or not? Go down into the ravine and try to retrieve a discarded weapon? Y/N?) while combat cards transport the player to a small arena to fight things out in simplified third-person combat with a strong Arkham Asylum vibe thanks to the ability to counter incoming attacks. It takes no time at all to learn how to play, and it has such a great tabletop feel that I felt no desire for multi-level skill trees or complex battle mechanics.

The thing that really sells Fate is the fortuneteller himself, though. Having this de facto "dungeon master" constantly in view across a virtual table strongly reminded me of my Dungeons & Dragons days, and it's only reinforced by the way he provides a running commentary over what's going on—his taunting opinions on each predicament or resolution recreate the atmosphere of playing in someone's basement, and this taunting frenemy vibe is quite appealing.

In terms of content, there's a full campaign mode with the goal of defeating the fortuneteller, but there's also an endless mode that works well with the card-based, semi-randomized nature of the design. One notable feature? The player can add or take cards away from the deck, customizing what kind of experience is had. Of course, it's not possible to remove all peril and only keep the treasure and reward cards, but if there are certain events that players would rather not have (the Cthulhu-like grabby tentacles is one that springs to mind) they can be swapped out for new ones, and the game provides a steady drip of unlockable cards to keep things fresh.

When Hand of Fate pops, it really pops. It's fantastically fulfilling to draw a card that awards a strong weapon before racking up some easy kills for gold, and then heading to a shop to restock on food and gear before grabbing a win. However, it's easy to get lulled into a false sense of player superiority thanks to the easy early stages. The difficulty ramps up about halfway through, though.

Since the game relies heavily on luck, it's possible to hit a bad streak and watch everything start spinning down the drain—just like any other boardgame, really. When the fortuneteller started in with his debilitating curses and cards that removed my advantages, things got pretty rough. (Starving to death is the worst way to go, I think.) Managing the deck and removing the nastiest cards can help mitigate some awfulness, but much of it comes down to luck of the draw—for every run where I steamrolled my opponent, there was also a crushing defeat.

In terms of outright criticism, my complaints are minor. The first is that since the player's avatar isn't tied to any specific narrative, it was disappointing to see that there was no female option. In this particular case, a simple "barbarian female" skin would have sufficed. Also, the subtitles for dialogue turn themselves off after each session. Quite annoying.

Otherwise, the game runs a bit choppily on the PS4. It's fine for the most part, but when the dealer starts shuffling the cards or when a large number of enemies are on-screen, things can start to chug. It's bizarre since Hand of Fate is a small-scale project without many bells or whistles. The PS4 should be able to run it with power to spare. This roughness doesn't impact play, but I hope a patch will come along to smooth things out.

If you ask me, Hand of Fate is a rare case of a brilliant idea coming together brilliantly. The premise is unique and interesting, the developers have crafted an engaging hybrid of card-based and real-time play, and the experience of engaging in the fortuneteller's game on multiple levels hooked me from the get-go. We're still in the early days of 2015, but don't be surprised to see this one mentioned as one of my favorites this December. Rating: 8.5 out of 10.


Disclosures: This game was obtained via publisher and reviewed on the PS4. Approximately 8 hours of play were devoted to the single-player mode, and the game was not completed. (I'm still playing!!) There are no multiplayer modes.

Parents: According to the ESRB, this game contains: violence and llood. Overall, it's quite tame. There aren't any sexual situations or instances of salty language, and the violence is basically a guy whacking thieves and lizardmen with a sword. If you ask me, pretty harmless.

Deaf & Hard of Hearing: No audio cues are necessary during gameplay and all dialogue (and it's good) is subtitled, but the game has the incredibly annoying habit of turning the subtitle text off every time the system is powered down.

This game has been on my radar for a while, and after seeing your impressions I think I’m definitely going to pick it up. Been waiting to see how games use a card mechanic other than just for battles. I probably will pick it up on the PS4; framerate issues aside, my computer most likely wouldn’t be able to handle it.