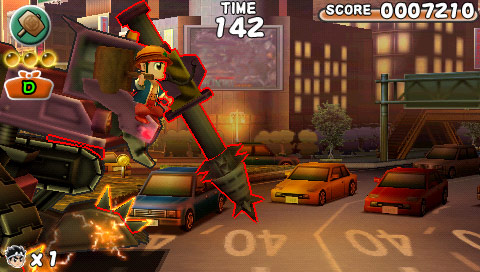 LOW The game's over before you know it.

WTF Get rid of romance problems… by whacking them with a mallet!!

Completely charming in every way, Hammerin' Hero from shoot-'em-up gods Irem (creators of the seminal R-Type series) has come out of nowhere to deliver a wacky PlayStation Portable platform adventure great for kids and people who appreciate the kind of uniquely Japanese insanity that's only found in the most offbeat niche games.

With a side-scrolling design hearkening back to some gems of the 16-bit era, hero Gen's adventure feels like getting back in touch with an old friend. It really only takes a moment or two to get the gist of what's going on: walking from left to right, jumping a few obstacles, and basically whacking everything in sight with a hammer, anchor, beatbox, or whatever else is available.

Besides the comfortably familiar gameplay, the first thing anyone will notice about Hammerin' Hero is that it's just so damned cute. The characters, the enemies, even the stages themselves… it's all totally adorable. Adding to the kawaii factor is Gen's penchant for changing his outfit. Although he starts out as a construction worker, other costumes are soon earned, each one with its own set of weaponry and attacks. (The sushi chef was a personal favorite.) Half the fun of the game is just seeing what Gen will be next.

Right in line with the art design and costume switching is the fact that each stage takes place in a completely different and irreverent location. It's clear that this game doesn't want to be taken seriously, and I was only too glad to participate in its pleasant madness. From the bottom of the sea to a haunted house, from a major league baseball game all the way to outer space, Gen's about taking it (in suitably over-the-top cartoon style) to the bad guys, wherever they may be. 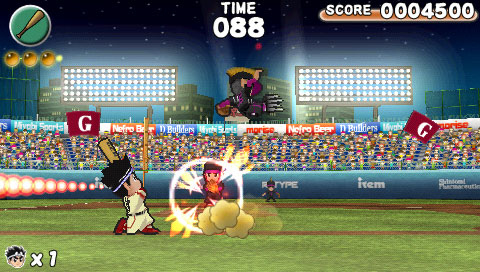 I have great affection for Hammerin' Hero. There is a strong, undeniably likable quality given off by the entire thing that I think will appeal to any PSP owner willing to give it a chance. However, despite my enthusiasm, there are two small issues that hold the game back from a higher score: length and production.

From the moment I turned the game on until the credits rolled, the entire playthrough ran close to two hours. Granted, I did not finish the game with 100% completion, but this is still an extremely brief duration for a retail game. While I don't usually object to short games, this is a rare case when I would have gladly sat through at least double or triple the amount of levels offered on the UMD.

In terms of production, the game has some unfortunate issues with slowdown. In fact, I'm quite sorry to report that the majority of that two hours of playtime displayed reduced processing speed, and normally-paced play was the exception rather than the rule. It doesn't appear to me that Hammerin' Hero should be an especially taxing game on the PSP's rather robust hardware, so this was disappointing to see.

Although Hammerin' Hero doesn't run as smooth or as long as I would've liked it to, it remains one of the most enjoyable PSP titles I've come across in quite some time. The tone, setting, and attitude are all correct, and if there is a sequel in the works somewhere, I'll welcome it with open arms. Rating: 6.5 out of 10.

Disclosures: This game was obtained via publisher and reviewed on the PSP. Approximately three hours of play were devoted to the single-player mode, and the game was completed one time. There are no multiplayer modes.

Parents: According to the ESRB, this game contains Alcohol & Tobacco References, Cartoon Violence, Comic Mischief, and Mild Language. Call me crazy, but this is one situation where I feel like the ESRB is really overreacting. I honestly don't recall what the "mild language" caveat is all about, and the other descriptors are based on content that's incredibly mild. Don't be scared off by the warnings, that E 10+ is definitely accurate and I would be quite comfortable letting any child play this game.

Deaf & Hard of Hearing: You will have no difficulties. There are no significant auditory cues during gameplay, and all action is telegraphed visually. All dialogue in the game is presented via text, as well. No problems at all.

hey, thanks for the comment. we get this a lot, actually. here at GC we use the full range of numbers from 1-10, with 5 being perfectly average– as in, it’s not bad. since most review sites tend to use only 7.5-10, anything approaching the lower range here at GC seems to automatically mean “bad” by comparison, but really, we’re just trying to use a more realistic scale. i mean, can someone explain to me the difference between an 8.6 or an 8.8? following this logic, a 6.5 is actually ‘above average’, although i can certainly understand how it looks… Read more »

the reviews here are the best online. yet the scores are way inconsistent. bashing reviews turn out 6. great interfaces turn out 6. sometimes, not good, not bad, turns out 6.
please reconsider the scoring or forget about it (i think it would only be good for the site).