In This Case, The Length Is A Good Thing 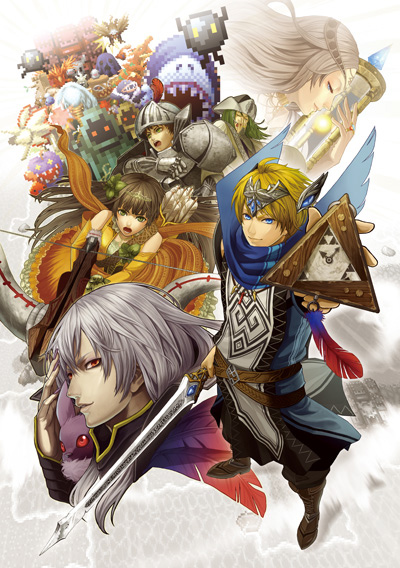 HIGH It's a real JRPG, except it doesn't waste your time.

LOW The Knight 30 mode could have used a little more work.

WTF Why is nobody talking about this game?

Japanese role-playing games (JRPGs) used to be one of my favorite genres, but I rarely play them now. I just don't care for them anymore since the genre has essentially remained unchanged for several generations. The graphics get better and there's always a new battle system coming down the pike, but if you've played one, then you've played nearly all. Even worse, they just take too damn long to finish. Extremely resistant to the "less is more" philosophy, any standard title can take upwards of forty hours to complete, annihilating several weeks' worth of game time with level-grinding and random battles. With so little innovation going on in this category, it hardly seems worth the investment. I've often said that games of this type run out of ideas and quality content long before they end, and after playing the amazingly superb Half-Minute Hero, I'm more convinced of that than ever.

A brilliant idea executed brilliantly, Opus's Half-Minute Hero is unquestionably a JRPG. All of the expected elements are here: a lone hero that gathers a ragtag group of friends to save the world, random battles and leveling up, buying items and equipment, talking to townsfolk, taking on side quests… there is essentially nothing different between this game and every other JRPG that's come before it except for one thing: it eliminates every single ounce of fat from the playtime and boils the formula down to its absolute core. Rather than taking forty, sixty, eighty hours or more to go from the first quiet village to the evil overlord's imposing castle, you do it all here in 30 seconds.

The strangest part? It absolutely succeeds.

Although the idea of taking on an epic quest and completing it in less than a minute seems impossible, when everything that bloats these games is removed, not only is it possible, it's absurdly enjoyable. Villagers rarely have more than one line of dialogue, random battles take a few seconds, and everything about the title zips along at lightning speed. It's hard to believe that a style of game so well-known for being chunky and time-consuming can survive such condensation, but Half-Minute Hero doesn't just to survive, it thrives. 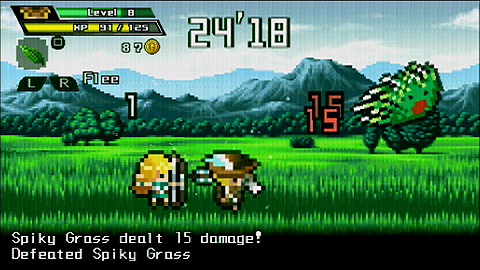 Supporting the radical re-imagining of this quicksilver structure is the fact that the game is incredibly self-aware and rarely takes itself seriously. As an example, it pays homage to its earlier roots with an art style intentionally featuring retro-awesome 8-bit style, complete with blocky sprites and two-frame animations. For anyone old enough to have played games during the NES era, it's impossible not to smile and get a warm, fuzzy feeling.

Intellectually, the developers are quite cognizant of all the bad habits and tropes that these games are made up of, and while they still partake of them, it's from a squarely tongue-in-cheek perspective. Characters often reference the absurdity of the hoops JRPGs make their fans jump through, and the writers have absolutely no qualms about staying away from historically sacred cows. Half-Minute Hero would still be a great game without the sarcasm and humor, but with it, it's superb.

The main quest is made up of 30 micro-missions that will only take players a few hours to get through, but don't get me wrong—that's absolutely not a complaint. Every minute is packed with action, enjoyment, and surprising depth. At no point did I ever feel as though my time was wasted or my patience tested. However, the developers have gone above and beyond in their efforts. Once the Hero takes down the Overlord, there are other modes to go through: EvilLord 30, Princess 30, Knight 30… and maybe a little more. (No spoilers here. You're welcome.)

Rather than being minor variations on the main game, each of these modes feature completely different play styles. EvilLord is a fey real-time strategy that has players summoning monsters. The Princess is all about shooting in extremely fast-paced scrolling levels, and the Knight is tasked with keeping a frail mage safe from advancing foes. Each one has its own discrete storyline, although they do all share a common overarching thread. I have to admit that I found the Knight missions to be somewhat less polished than the others, but I appreciated the variety and the effort put into making each chunk of the title stand apart from the rest.

After all's been said and done, I've got nothing but praise and adoration for Half-Minute Hero. It's extremely smart, has a great sense of humor, a bold design and fantastic art direction. Although having a basic familiarity with JRPGs may be required to fully appreciate everything that's going on in this title, those well-versed in the genre or who can appreciate truly innovative design will find it impossible not to fall in love with. Rating: 9.0 out of 10.

Disclosures: This game was obtained via publisher and reviewed on the PSP. Approximately 9 hours of play were devoted to the single-player mode, and the game was completed. No time was spent in multiplayer modes.

Parents: According to the ESRB, this game contains animated blood, language,mild fantasy violence, and mild suggestive themes. Did you take a look at those screenshots? Suffice it to say, I think the 8-bit approach pretty much negates most concerns parents may have for their kids. I found the game to be very safe and nothing stood out to me as being questionable or in poor taste. Younger children may not quite "get" what's going on here or appreciate what it brings to the table, but the E 10+ rating is appropriate.

Deaf & Hard of Hearing Gamers: You won't have any problems. There are no auditory cues necessary for gameplay, and all dialogue is delivered via text. Everything is onscreen and totally accessible.