Returning for a second round of sounding off is Urban Fantasy author extraordinaire, Anton Strout. His cult favorite Simon Canderous series is going strong and recently released Dead Waters. If you haven't checked out his books, I would strongly urge you to do so—if you read this blog and enjoy it, the odds are that you'll enjoy Anton's work as well.

(…And for the sake of convenience, here are links to the first three books in the series: Dead to Me, Deader Still, and Dead Matter.)

Without further ado, here's what Anton has to say on the subject of storylines in games: 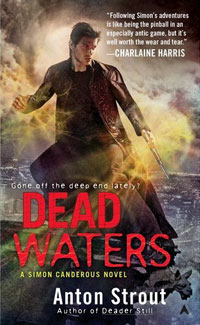 Once again, Brad Gallaway (and Gamecritics.com) have graciously yielded their floor to me.

As Brad mentioned above, I'm a writer with book four in my Simon Canderous series (entitled Dead Waters, just out) but I am also a gamer. The author bio at the back of the book reads:

"In his scant spare time, he is a writer, a sometimes actor, sometimes musician, occasional RPGer, and the world's most casual and controller-smashing videogamer."

Part of me admittedly smashes the occasional controller because of my frantic button mashing approach, but there are a lot of specific parts in a game that can drive me to Hulk-like rage as well. Given my career as a writer, it's probably not too surprising that I pay attention to the writing in games, above all other aspects.

When the writing is great, it's great, and it really sticks with me even years after playing:

Metal Gear Solid has long cutscenes, but also has great characters, memorable exchanges, and it actually tried to have a message to it.

Fatal Frame – scary Japanese ghost storytelling that is right up there in the creep factor alongside films such as The Grudge and The Ring.

The Legend of Zelda: The Ocarina of Time – the first game to make me both cry over Link's loss of childhood and laugh as rocky King Goron danced to Link playing his tune on the ocarina.

Even Katamari Damacy, simple as it was, fit the game style, with the puny prince constantly trying to please the demanding, lovable whack-job King of the Cosmos.

All those stories brought plot and character to games alongside great play mechanics and helped create a totally pleasurable experience. Then there are a different group of games that stick out for their stories, but for all the wrong reasons. That's where I think the bulk of my controller smashing happens.

It would be easy to pick on movie games here, but I thought instead I'd talk about two franchises that have both slowly driven me mad over the years, each with their own problems, but both causing the writer vein in my forehead to pop out. 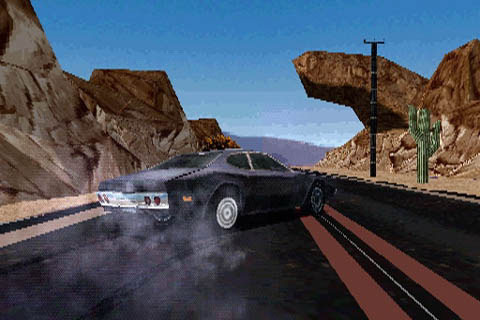 I was never much of a driving game fan growing up, but when the original Driver: You Are The Wheelman! came out, I really liked what it initially brought to the table as far as game mechanics, but something always bothered me—the premise.

You play Tanner, an undercover cop, which apparently is enough to make all the rest of your behavior throughout the games a-okay. The amount of carnage, property damage, homicide, and vehicular manslaughter I perpetrated in the name of keeping my cover as a good cop should really have earned me several life sentences.

It just didn't make sense in the grand scheme of the story, and in direct reaction, I think that's where my growing love of Grand Theft Auto was able to swoop in and really dominate my soul.

In GTA3, you were unapologetically a criminal, and knowing that, it was easy to build a compelling storyline, unlike Driver where every action went against the very premise of who you were supposed to be. As the Driver franchise switched from house to house, they really tried to change up their game to keep up, but to me all future efforts felt forced and never quite reclaimed a place in my heart.

However, the series that I think could use the most help in the writing department is one that I loved at first… the Fable franchise, in particular Fable 2 and 3.

Now I have long had a love/hate relationship with Lionhead Studios and its god-emperor Peter Molyneux. While a legend in the field, he's also an innovator whose excitement over his own ideas often kneecaps building a compelling game in the end. I keep hoping the Fable games will rally and get better, but more the fool me for keeping hope alive; his game-to-game implementation of new mechanics hamstrings the amazing tales he professes to bring us. 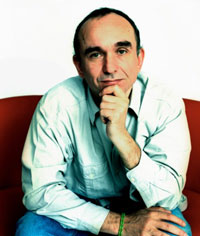 The part where the Fable franchise really falls apart is a huge story event in Fable 2, where you spend ten years as a prisoner in the big tower of evil before breaking free and returning to Albion.

I was kind of excited when it first happened. You see, during all my play time, I was building up my property investments, making money on all my properties and shops, so during my decade away, I was thinking "man, I am going to have so much waiting for me when I return!" So I went home… and my children had grown up (which was a nice touch) although nothing ultimately came of that.

As for my cash? Not a dime had been earned in that time, with no explanation. When your story and game mechanics do not jive, when they seem to be fighting against each other… this tends to make me throw my controller or stop playing. So, I put it aside and never looked back.

But once again, Peter Molyneux got all excitable when he started talking about Fable 3, and fool that I am, I got excited and picked it up.

Again, the story is a bit by the numbers and a bit lacking: ain't-it-hard-to-be-king? (Not really, it turns out, thanks to new but busted innovation mechanic!). It's a shame because there are real moments in the franchise that I love, like a miniature D&D game you get shrunk down into, but I find those moments fewer and farther apart with each passing addition to the series.

I understand part of the dilemma in building a game. I imagine the story and dialogue have to be locked in fairly early from a design perspective, but I think designers would do well to get some seasoned fantasy writers to come in and consult on the early phases of scripting. I really do think it would result in a better game play experience all around. So much goes into the gameplay mechanics, but I'd love to see the story aspects as less of an afterthought as they generally seem now.

So here's hoping that game studios continue giving the writing in games the attention it deserves. I mean, I really would like to take "controller-smashing video gamer" out of my author bio at some point, you know?

Infinite thanks go to Anton Strout for contributing this piece, and if you are of the persuasion, please check out his upcoming book Dead Waters, or hey, his whole series for that matter.

[quote=NewGuyDave]Bioware hit big again with Dragon Age: Origins. Not just for the richly detailed world that you get to engage in, or the six different origin stories to start from, but the difficult moral choices that you face along the way. Whatever your character race and class, at some point you’ll be faced with a conundrum. For example, (SPOILERS WARNING) deciding between helping the elves by eliminating the werewolf-cursed humans, or aiding the werewolves to get vengeance against the elves. The first option looks good on the surface, until you learn the elf leader cursed the weres in the first… Read more »

Bioware hit big again with Dragon Age: Origins. Not just for the richly detailed world that you get to engage in, or the six different origin stories to start from, but the difficult moral choices that you face along the way. Whatever your character race and class, at some point you’ll be faced with a conundrum. For example, (SPOILERS WARNING) deciding between helping the elves by eliminating the werewolf-cursed humans, or aiding the werewolves to get vengeance against the elves. The first option looks good on the surface, until you learn the elf leader cursed the weres in the first… Read more »

Obligatory Molyneux god head. http://img.photobucket.com/albums/v632/zippydsmlee/PeterMfableIAMGOD.jpg Maybe I should add a dammit or or I think. LOL ========= As a psudo amateur fiction drooler(writer) Metroid AM kills me dead. More so than Driver, it has an excuse at least, your a psudo criminal. Metroid AM tries to force a normal story narrative on a series thats been founded on a silent first person narrative. Though I wonder which is worse Fables sorry excuse for a story or AMs. AM mechanic issues aside(I am a mechanic nazi, mechanics>story, always … ALWAYS!) I found AM to be utter crap. Maybe because give me… Read more »