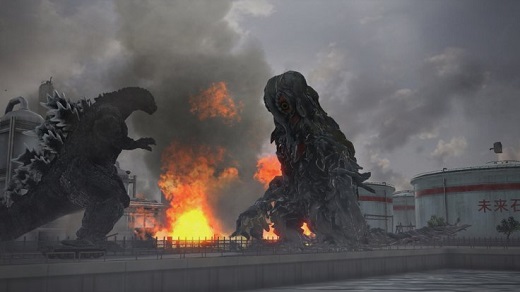 LOW Everything. Literally everything.

WTF I beat the game once and still can't level up a single time?!?

It doesn't seem like it should be tough to make a solid Godzilla game, yet developers have failed time and time again to make anything halfway decent. I mean, it's just a bunch of giant monsters beating each other up. How difficult is that? With such a premise, the game should practically make itself, yet no one has managed to nail it. This latest entry from Natsume Atari proves no different.

First things first, let's give praise where praise is due. Although the graphics overall are far too simple, the monsters look nice enough, especially considering how crude they appeared when Toho Studios made the famous films. There are approximately 22 monsters playable in various modes, so those who know their stuff should be pleased to see Mothra, King Ghidorah, Mechagodzilla and others fairly well-represented.

…And that's about all the praise I can give. The game is such a string of bad choices and puzzling designs that I'm having a hard time figuring out how it came to be. It's as though the developers were actively trying to make it an unpleasant experience.

For a "brawling" game, the controls are stupefyingly clunky and imprecise. Creatures move with the left stick, and the camera is controlled with the right. However, the creatures turn by using the L1 and R1 buttons. I assume this is so that fans can maneuver the camera to get cinematic views of the action, but what it means in practice is that it's incredibly unintuitive and makes no functional sense.

Worse, each monster only has a small number of moves, yet everything feels unresponsive and sluggish. Attacks don't always come out when the buttons are pressed, enemy attacks usually get priority, and particularly irritating is that the triangle button does double duty between a tail swipe and a grab move. It was nigh-impossible to do the right move on command, and I usually got the opposite of what I wanted.

Further, there's no block or dodge move except for a bizarre "energy release" burst that uses up Godzilla's breath ray power. Without much at the player's disposal besides straightforward attacks, the combat is the simplest, most brainlessly basic kind of slugfest where monsters walk right up to each other and duke it out. Of course they're supposed to be giant, lumbering beasts and they were anything but spry in the movies, but there's no reason this game has to play like remedial garbage.

The rest of the game is as poor as the combat. The story mode is a series of simple arenas filled with shoebox buildings, and each has a number of generators. In every stage, Godzilla must destroy the generators while fighting off an enemy monster. It's a painfully tedious formula that's in dire need of more variety.

Speaking of tedium, the game includes an upgrade system to help Godzilla grow in size and power, but it requires materials dropped from defeated monsters. It seems fine in theory, but considering I finished the game and didn't have enough stuff to upgrade even one of Godzilla's abilities, I think the balance is wildly off. The kicker? Even if enough materials are collected, the game won't apply the upgrades unless the player restarts their progress in the campaign!

There are a few other modes available where players can control non-Godzilla monsters or play with figures in a diorama, but these are locked from the start and require grinding in order to unlock their features. It's a real shame because this game would have significant fan value if players could simply pop it in and partake of the supplementary fanservice. Keeping so much of it locked up behind a play requirement when the gameplay is this bad is a huge mistake.

The saddest thing about all this is that I'm genuinely a fan of Godzilla and it wouldn't have taken a lot for this game to earn a pass from me, but what was delivered fell short of even those low expectations. It takes a special kind of ineptitude to make a game about giant monsters incredibly boring, but Natsume Atari has managed to do a world-class job of it. This project would be questionable as a $20 download, so to see it launch at a full $60 is a bad joke. Everyone but the hardest of hardcore Godzilla fans should stay away, and even those fans should carefully weigh whether the nostalgia is worth the cost of entry. Rating: 3 out of 10


Disclosures: This game was obtained via publisher and reviewed on the PS4. Approximately 4 hours of play were devoted to the single-player mode, and the game was completed once. One hour was spent in multiplayer modes.

Parents: According to the ESRB, this game contains: fantasy violence. It's all about rubbery-looking monsters throwing weak-looking attacks. Pretty safe for anybody, I'd imagine.

Deaf & Hard of Hearing: Dialogue is subtitled, and there are no audio cues necessary for successful play. It's fully accessible.

The game can be beaten in 4 hours or less, and they’re charging full price for it. Pity you don’t do video reviews or you could’ve asked Joe Vargas to do a clip voicing his rage over this stupid decision.