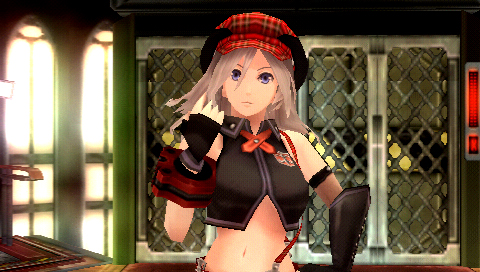 LOW All clothing in the game is only cosmetic; there are no effects or bonuses.

WTF Why is it called "Gods"? Every character in the game says it without the S.

This may sound a little odd to say, but Gods Eater Burst

wouldn't exist without Monster Hunter. Capcom's mega-franchise is a force to be reckoned with in Japan, and has an extremely dedicated cult following in the United States. In fact, it could even be described as a full-on phenomenon.

As with every series that finds massive success, there are always those wishing to tag along and capitalize on it by being similar. It's a strategy as old as humanity, and there's really no shame in doing something others have done, as long as there's a new twist that gives the come-lately its own identity. Gods Eater Burst manages to do so, and while the inspiration is clear to see, it succeeds at carving out its own niche. However, that's not the same as saying it's successful in its own right.

Just like Monster Hunter, this game is a third-person, real-time combat affair with a heavy emphasis on resource collection and item crafting/upgrading. However, the first area where Gods Eater Burst breaks away from Capcom's no-nonsense formula is that it actually has characters, dialogue, and a story.

Rather than putting the player in an environment and letting them have at it with little backstory or motivation, the game tells an anime-flavored tale of an earth ravaged past the point of Apocalypse by demonic creatures. It's often too talky and the cast of characters falls into the usual spiky-haired, everyone's-so-pretty categories, but I appreciated the effort. 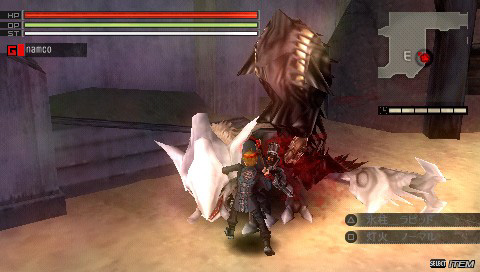 In this beast-ravaged-yet-still-emo world, mankind's last bastion is a fortified base known as Fenris, and its inhabitants are the titular Gods Eaters. These super-soldiers keep the monsters at bay with special weapons called God Arcs, and it's here where the game's developers truly step out into their own.

A combination of sword, shield, gun and giant mouth, God Arcs have the ability to switch between any of those four modes on the fly. (In case you're wondering, the mouth collects resources by biting them off of enemies.) Rather than limiting players to just one type of weapon per mission like other similar titles, Gods Eater Burst encourages mastery of all four at once by incorporating an ingenious combat system balancing both ranged and melee tactics.

Every fierce monster in Gods Eater Burst has a weakness that can be exploited by an Arc in gun mode firing bullets of the correct elemental persuasion. For example, blast icy shots at a target vulnerable to cold, and the skirmish will soon be won. However, the catch is that gun energy depletes rapidly. The quickest way to recharge an Arc gun? Switch it into sword mode and start hacking away. It's a brilliant mechanic that ensures players never rely too heavily on one means of attack or another, and the pace of battle remains at a constant high as the player works both short and long ranges.

While both the story and the God Arcs are positive aspects, there's no doubt that Gods Eater Burst fails to surpass Monster Hunter—it may appeal to those who find Capcom's effort too slow or inscrutable, but it certainly has problems that diminish its achievements.

The first issue of note is that Gods Eater Burst uses the same camera-mapped-to-the-D-pad that Monster Hunter does. Personally, I've spent over 400 hours with Capcom's games, so adapting to the system took no effort at all. However, for players who aren't used to it, the action here is so much faster and more erratic that it can be quite difficult to follow at times. (…And that's not even mentioning the fact that the Arc's gun mode also uses the D-pad for aiming, too!) 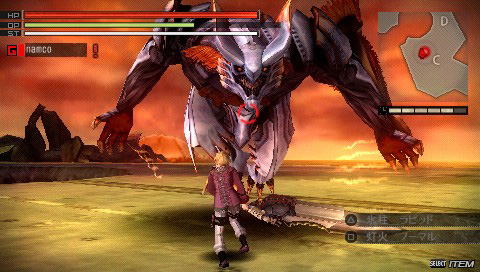 Another problem I found with Gods Eater Burst is a lack of sufficient information given to the player. Primarily, Burst has an incredibly deep bullet customization system that can be used to add special effects and enhance the power of Gun Arc shots. Unfortunately, the game gives the player virtually no information about how to use the incredibly unintuitive system. In fact, this system is barely even mentioned despite being the deepest aspect of gameplay. It's nigh-impossible to successfully modify a bullet without a degree in theoretical engineering, and leaving such a rich aspect of play so inaccessible is a horrendous oversight.

The final (and most serious) issue I had with Burst is that it's simply more limited and shallow than the competition.

For example, the number of creatures to fight against is small, and there are only a handful of areas in which to do battle. Even worse, despite the ever-increasing number of weapons to craft, there's very little difference in the way they're used. The same basic combos apply from start to finish, and battles lack nuance and subtlety. Combat strategies don't evolve, and the learning curve of mastery is essentially a flat line. By the time I got a third of the way through the game, numbing feelings of repetition and sameness had started to set in, and that's a hard thing to ignore.

Adding to this shallow feeling is that Gods Eater Burst treats the player's clothing as strictly cosmetic. Since outfits don't award any status effects, defense, or abilities, it feels as though there's a large part of the game that's gone missing. Don't get me wrong—I enjoy playing dress-up with my characters just as much as anyone, but between the repeated enemies, static combat and pointless clothing, I was craving more to see and do.

Information gaps, repetition, and camera issues aside, Gods Eater Burst remains a faster-paced and more welcoming version of Monster Hunter. Although it's shallower and lacking the sophistication found in the game that inspired it, wielding a God Arc is enjoyably unique, and the game comes across as energetic, stylish, and likable. It may not have the staying power of the competition, but I found Gods Eater Burst

to be an interesting (if short-lived) reinterpretation of making useful items out of dismembered animal parts. Rating: 6.5 out of 10.


Disclosures: This game was obtained via publisher and reviewed on the PSP. Approximately 16 hours of play were devoted to the single-player mode, and the game was not completed. No time was spent in multiplayer modes. (Multiplayer is local only.)

Parents: According to the ESRB, this game contains blood, language, suggestive themes, use of alcohol and tobacco and violence. Although the warnings make the game sound a lot more risqué than it actually is, the fact remains that it's aimed at teenage players (and up). The qualities found in the story segments are on-par with the average older-skewing anime series, so if you let your kids watch those, then the game won't be anything to worry about. However, if blood spattered combat and voluptuous girls in skimpy outfits don't fly in your household, then give this one a pass.

Deaf & Hard of Hearing: There shouldn't be any problems. All dialogue is subtitled, and there are no relevant auditory cues during gameplay. It's totally accessible.