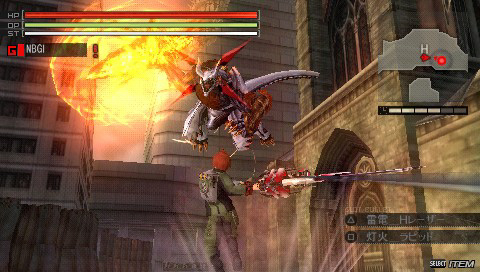 I haven't mentioned it here at the blog yet, but it's basically a "lite" version of Monster Hunter with a strong anime slant and combat that runs a hell of a lot faster than it does in Capcom's game—not that the speed itself is necessarily a good thing. (Spazzy alert: GO!!!)

Other than a much faster pace of play, it's got actual characters and story, which can be seen as either a plus or minus to certain players. It's certainly on the cliché side, but I'm sure fans of anime won't mind too much.

The big hook to the gameplay is that the player uses a weapon called a God Arc which is a sword, shield, gun and giant mouth all wrapped up into one. With the push of a button, this particular piece of kit can transform back and forth between all four modes, so combat feels a lot different than Monster Hunter's emphasis on mastery of each separate class of weapon.

The final thing to mention is that the bullets the player's gun uses can be modified to take on different elemental attributes and fire in different patterns. With a little bit of tweaking, all sorts of effects can be created: missiles that launch into the air, bullets that scream in a circle around enemies, some that are homing, some that leave napalm-like trails, etc. etc. etc.

The variety of effects is mind-boggling and deep, but the interface is incredibly player-unfriendly and the game gives no tutorials whatsoever. I had to get detailed help from another player in order to begin to understand what I was doing, and between that person, YouTube and GameFAQs, I'm just now starting to get a handle on it.

… seriously, it's that complicated.

I estimate I'm about halfway through the game, maybe a little less. I'm still having fun with it, but I'll be perfectly frank in saying that despite the new ideas it brings to the table, it really can't stack up to the depth and stellar level of production that Monster Hunter sports. It's a fun diversion for sure, but it's got no chance of unseating the king.