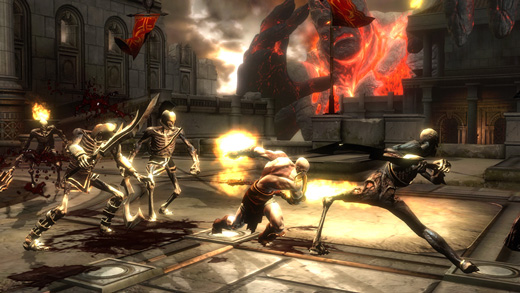 Getting back to our regularly-scheduled program, I didn't intend to talk about God of War III again, but it ended up being such a terrible experience that I just couldn't resist.

Off the top of my head, I really think that whoever came up with the "wooden crates" concept for the labyrinth was either completely off their rocker or having a giant joke at gamers’ expense. I mean, the balance of power in Olympus was kept by a bunch of rotating brown boxes? Really?

I also found it hilarious that the final match-up between Kratos and Zeus boiled down to being a clunky 2D fighter. Again, was someone at Santa Monica Studios having a laugh?

The in-jokes aside, the writing was just terrible—worse than either of the previous two games, and it's not like those were known for their scripts. It went so far off the rails by the time credits rolled that I was actually embarrassed that I completed it.

For example, Kratos spends the entire game acting like a giant penis and the writers completely pass up every opportunity to give him a shred of humanity, only to have him get all gushy at the end for Pandora. Why? No clue. Ostensibly it's because he had a daughter once, but I'll be damned if the writers even began to make that case.

Even worse was the endgame. Going from combat to a long sequence of preachy cutscenes was bad, but then the writers spend all that time talking about hope and light and humanity, only to turn around and present the player with a scene of extreme violence as Kratos pounds Zeus in the face until the screen is literally obscured with blood. Thematic contradiction, anyone?

There are tons of other things wrong with the game (a favorite: having a certain wall texture designated as not grab-able, only to have the exact same texture BE grab-able on a different wall!) but I'm not going to waste any more time on it. It's a sub-par, lackluster game that does not match up to the quality of the previous two, or even the PlayStation Portable iteration.

Didn’t feel like starting anything major tonight, so I spent some time with a couple of quickie downloads.

Fly Fu (PlayStation Portable Mini) – I fell in love with this game's graphic style, but it plays like garbage. Basically, players take control of a fly seeking revenge, and control him as he travels from left to right, beating up enemy bugs as he goes.

The attacks seemed to trigger depending on how close and what position enemies are in, but if there's any way to predict which attack is going to happen, I couldn't figure it out. Sometimes a kick, sometimes a punch. Sometimes forward, sometimes back.

I was also not impressed with first level, which asks players to kill a hundred enemies. I'm sorry, but the mash-happy quality of play isn't nearly interesting enough to be able to justify that much repetition, and fighting a boss at the end of it was absurd—there's not a fighting engine here, just pure mash.

It's cute and fairly clever, but the programmers don't seem to have the faintest idea about what makes a good game and I bailed without getting to the second level. I was willing to take a chance on it after seeing a short clip on YouTube, but if this game had a demo available, I never would've purchased it. Avoid.

Trine: Path to New Dawn (PlayStation 3) – I'm a big fan of Trine and its tripartite body-switching action, and my ears quickly perked up at hearing that there was an additional piece of content available. @Silenthitoshura warned me that it wasn't really all that great, but I decided to take a shot anyway. After all, it was only $1.

The content consists of one level in which characters must ascend vertically. There are tons of falling rocks and exploding barrels to knock players back down, and the platforms used to scale the heights don't feel as though they were placed with much care. Additionally, players cannot import their powered-up characters: the Knight, Wizard and Thief are all upgrade-free regardless of what state they were in when the main game was completed. After getting to the end (about five minutes' work) nothing happens except a classic "Thank You!" from the developers.

As willing as I am to support these guys, I think Silent was right when he said that it felt like an early, aborted attempt at the main campaign's final level. New Dawn doesn't feel like an actual "addition", it’s more like a scrap from a cutting room floor, and asking players to pay even $1 for this was a bad idea. Avoid.

I dunno its a better button masher than Dantes inferno or CV lords of shadow. DI is the lest cringe inducing story/dailog wise.

I simply don’t understand why GOW3 is rated so highly. It is a stupid buttons mashing game

I was toying with the idea, but I think I’ve already said what I had to say. Still, if i get some extra time (extra time? hahaha!) i might whip something together…

I agree that God of War 3’s writing was bad. Kratos all of a sudden giving a shit about Pandora after telling her to fuck off the whole game was a big wtf moment, but not as big as the one when Pandora’s Box turned out to be EMPTY! It was like they knew they wanted to make a third game so they left part 2 with a cliff hanger, and then took the 1-2 hours left of the story and added a bunch of filler to make another 8-10 hour game. Even so, I can’t agree that the whole… Read more »

I thought I was the only one who thought GOW 3 sucked. It amazes me how this game is inferior in every single way to its predecessors. Ok, some can argue that the gameplay is the only saving grace of this game but that still doesn’t change the fact that the writing was terrible and the ending… oh god the ending!

Brad, will you do a “Second Opinion” review for GOW 3?