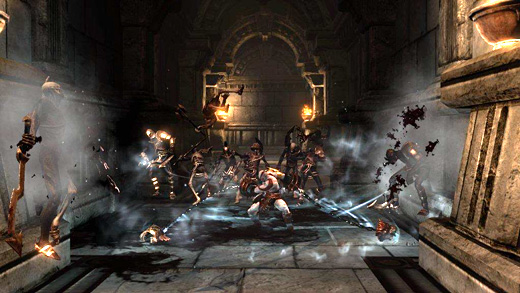 The great game of catch-up continues…

After deciding that Bayonetta wasn't worth completing (though I was really in love with the whole guns-on-feet thing) I moved on to God of War III.

While I think my wife is a bigger fan of the series than I am, I certainly enjoyed the last two games. They were pretty close to the top of the PlayStation 2 action genre if you ask me, so I was definitely curious to see where the developers would take it on Sony's new machine.

Although I haven't yet completed the game (just got to the scorpion part) it's been a pretty flat experience so far. There have definitely been a few high points like the Escher-esque Labyrinth or the battles with Cronos or Hades, but not nearly as many as I would have expected. Frankly, the bulk of the game feels like it could've easily taken place on the PS2.

I didn't expect this final game to be a major re-envisioning of the series, but the graphics aren't as impressive as I would have thought and it doesn't feel as though any of the gameplay mechanics have been updated. The weapons are different (and that Cestus kicks some ass, doesn’t it?) but basically it's business as usual here. Flip a few switches, kill some dudes, witness environmental architecture on a gargantuan scale. It's the same old God of War on the PS3, no more, no less.

Looking at the plot, it's pretty thin. There were several areas that I felt the writers could have used to enhance and deepen Kratos, but they went unused. Instead, what we get is the Ghost of Sparta constantly acting like a total dick. From a writer's perspective, a plot that keeps the main character on a single note from start to finish is a badly written story.

Perhaps as a way of making up for scripting, the gore factor has been increased to a fairly surprising degree. I'm certainly not squeamish, but there were a few scenes that I felt were unnecessarily over-the-top without adding anything to the experience. Gore for gore’s sake. The obligatory sex minigame was ridiculous as well. With all of these things taken into account, the tone of the experience has shifted away from something that feels legitimately mature and more towards being reaction-hungry.

It's not a terrible game by any means, but I'd be lying if I said it was very exciting. I'll certainly finish it (which puts it ahead of Bayonetta, at least) but there won't be a second playthrough and I doubt I'd recommend it to anyone who asked.

If you're going to be at PAXPrime in Seattle this year and you haven't completely booked all your evenings, head here.

On the evening of September 3 at 7 PM, a tweetup will be happening at the Cheesecake Factory across the street from the convention center where PAX is taking place.

The first fifty people will get some free swag, the free slices of cheesecake will be first-come first-served, and basically it'll be a good chance to get to meet some people that you might tweet with every day, but have never met in real life.

The likelihood for the event getting crazy is high since the Cheesecake Factory is usually slammed and we've got no idea how many people will swing by, but I'll be there and Chris Poirier (@BetaChris) will be as well, so reserve a spot for yourself via the link above, or just pop in and say hey if you can.

Thanks for the link! Can’t say that I disagree with your points. Any way you sliceit, GoW3 just isn’t what it should be.

In case you want a different take on it (not opposite yours, just one that sees other problems), here’s mine.