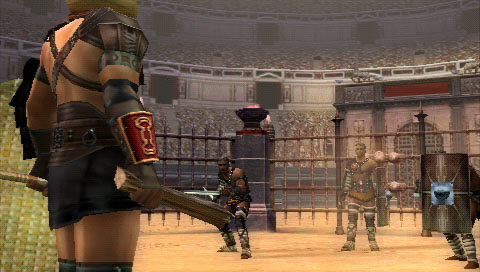 HIGH Improving my favorite sword and killing an opponent in two strikes.

WTF Why aren't there more bull, tiger and elephant battles?

, and to be fair, there are a good number of reasons why it disappeared off of the radar before it was even a blip. First of all… gladiators. Second, the game is 90% combat with no world to explore or any non-combat tasks. Third, who plays the PlayStation Portable (PSP) these days, right?

Given the factors stacked against it, it's understandable that this title remains utterly unknown. However, it's a real shame that's so—for players of certain stripe (like me) Gladiator Begins is a fantastic, addicting experience from start to finish.

A third-person hand-to-hand actioner, the player takes on the role of a slave who's been purchased to fight in the gladiatorial games of the Roman Empire. After creating a character from a decent suite of customization options (male/female, heavy/light build, and so on) the player enters training and then chooses one of four weapon styles: single sword, double sword, sword and shield, or bare-handed. From that point on, the player fights.

It's fair to say that Gladiator Begins is all about the combat. The vast majority of playtime will take place inside a coliseum, with the player participating in team battles, three-against-ones, free-for-alls, and even historical reenactments of famous Roman battles. While it was certainly risky to base the game solely on fighting in an arena, the developers' gamble paid off thanks to smart controls and tapping into the OCD tendencies of players who enjoy tinkering with weapons and armor.

Looking first at the elegant controls, I admire how they're mapped with each face button corresponding to a certain type of strike. For example, the triangle button (at the top) will produce a head strike. Tapping square (the left face button) will attack left, and the other buttons follow suit. It's simple, it works like a charm, and most of all, it makes sense. However, even with a streamlined control system, the game would become repetitive if not for the wealth of options at the player's disposal. 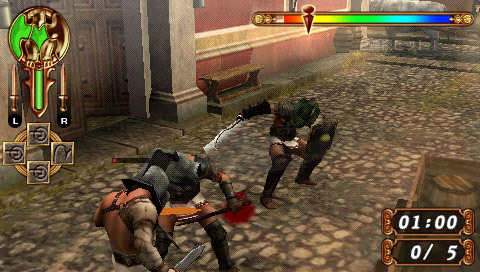 As a person who has spent hundreds of hours tinkering with mechs in Armored Core and hundreds more crafting weapons in Monster Hunter, it's safe to say that I find mixing and matching parts to be an endlessly entertaining activity. Gladiator Begins scratches that same obsessive itch.

During each match, it's common for the player to knock pieces of armor, shields and weaponry off of opponents. After victory, these goods can be collected and either worn as-is, or combined with other pieces in order to increase attack/defense, or to decrease the weight of the item. (Equipping too many heavy pieces slows performance and makes the player an easy target.)

There are dozens and dozens and dozens of equippables to work with, not to mention that certain high-profile "superstar" gladiators have their own personalized gear for players to lust after. Mixing and matching to find the right balance of offense and defense without a weight penalty is a challenge. Add in the task of finding which equipment works best for the combat style the player favors, and it turns each match from a simple melee into a tactical opportunity to get better gear and improve stats.

With most matches only lasting a few minutes (at most) and new gear dropping at a fast and furious rate, Gladiator Begins has no problem maintaining a high level of return on time invested. The repetition of so much combat might not satisfy players looking for a well-rounded adventure, but to me, this title distills aspects of play that I enjoy into focused, dense sessions. After just fifteen or twenty minutes of time, it's easy to craft a wicked new spear or to see crucial stats buffed. Tangible, significant progress was made every time I turned the PSP on, and that's something that not many games can boast.

So what about the story? Gladiator Begins makes a token effort with a few characters talking briefly about political backstabbing or marital infidelity, but it's safe to dismiss the dramatic side of the game. I sincerely doubt anyone would stick with it just to find out how the "plot" ends, and in this particular case, that's quite all right. With the combat as enjoyably solid as it is and with so many attributes to adjust, alter and experiment with, I really felt no need for a grand tale—gameplay itself was more than enough to keep my interest.

Although it's too bad that Gladiator Begins

landed with nary a whisper, it's clear to see that the title would never have found a large audience to begin with—it's aimed at a certain hardcore niche, and for those outside of that niche, there will be little here of interest. However, for players who love to take a zeroed-out character and build them up into an overwhelmingly powerful force via grinding, creative equipping and numeric management, this combination of swords, sandals, and statistics is an experience not to be missed. Rating: 7.5 out of 10.


Disclosures: This game was obtained via retail store and reviewed on the PSP. Approximately 10 hours of play were devoted to the single-player mode, and the game was completed. No time was spent in multiplayer modes.

Parents: According to the ESRB, this game contains blood and violence. Parents should probably steer their kids clear of this one. Although there are no graphic disembowelments or decapitations, the entire game is about hacking away at people with swords, spears and hammers. (It's bloody, yo.) Additionally, there are a few lines of suggestive language, though no sexual situations were observed.

Deaf & Hard of Hearing: You will have no problems at all. All dialogue is presented via subtitles, and there are no significant auditory cues during gameplay. I played more than half the game without sound and had no problems whatsoever. It's totally accessible.