The Spring visit with my son is over. It was a good one, just like any visit with him is a good one, although as time goes by the nature of these visits change. He is seven now, will be turning eight later this year, and it's pretty amazing to see him growing as a person. The funny things he says, the small observations that only a child would make, the unique perspective on anything that comes across his path… it's all joyful and incredibly entertaining at the same time. Also, I'm quite proud to say that he finished two more games on his own, bringing the grand total to seven. Can't wait to see him again this summer. 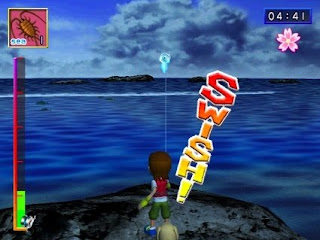 Fishing Master: pwned by my son.

In other child-centric news, the wife is officially nine months pregnant today, so I'm on high alert for imminent infant arrival. We spent a couple days this past week getting the house all ready; moving furniture around, decluttering, and making sure we have all of our diapers and wipes in appropriate places. The doctor's thinking early May, but I have a feeling that it will be sooner than that. If I stop posting updates to this blog and I vanish from twitter for a little while, you can probably guess what happened.

Been spending some time playing Henry Hatsworth in the Puzzling Adventure on DS lately. 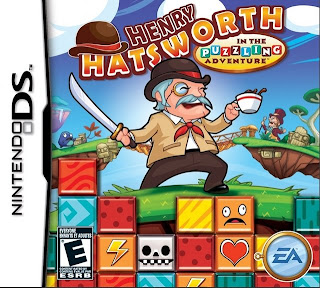 It's been getting quite a bit of positive praise from people whose opinions I usually put some stock in, and I'm glad to report that it's as good as they suggest. I won't talk about it too much since I'm contemplating a review, but I will say that it's certainly worth a purchase for anyone who can appreciate tightly tuned platforming and some straightforward puzzle action. The game is certainly more than the sum of these parts and combines very well together, and honestly, I'm little bit mystified as to how EA ended up publishing something of such quality.

Besides Hatsworth, I've been completely addicted to Solar on Xbox Live Community. I'm definitely going to do a review on this one, but instead of making you wait for a verdict I will say that you should just go and download the full copy right now. 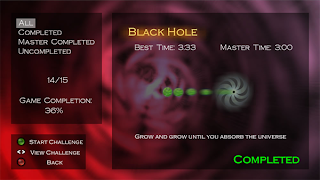 It's a little hard to categorize, but the game puts players in the role of a sun roaming the universe. While traveling through the cosmos in sandbox mode, you can absorb planets that are drawn into your orbit, crash into other planets, and generally screw around in a cosmological sense. For players wanting a little more structure, there are eighteen challenges. Things like "destroy eighty asteroids" or "get three life-bearing planets to orbit you", and so on. It's a perfect balance between form and function, and I'm just really in love with it right now. It reminds me a bit of Nintendo's Art Style: Orbient, but a lot more relaxed and less stringent.

BTW, any plans for you and Erin…?

LMK what you think of Solar.

Congrats on the upcoming addition! On your word, I’ll try to add Solar to the library here as soon as I can.