Not Much Under that 'Do-rag 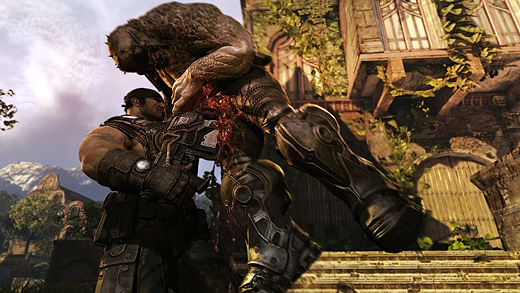 WTF So many unanswered questions from so many angles.

The superstar Gears of War franchise, famous for its thick, rich bro aroma and for mounting a chainsaw on the underside of an assault rifle, has now come to a close with the subject of this review. While many saw Gears 3 as one of 2011's best games and a slam-bang endcap to one of the 360's heaviest hitters, I have to admit to being a little disappointed. For all the promises of "bigger, better, more," it didn't manage to deliver in a way that really mattered to me.

Technically speaking, it's easy to see that Gears 3 is the most polished in the series. Dashing behind architecture and engaging in the trademark "stop and pop" cover-based shooting is prettier and smoother than it's ever been. It's hard to imagine anyone faulting the nuts and bolts here, and rightly so—Epic's had two previous games' worth of experience to nail it down tight. In a larger sense, though, it's hard to avoid a mild sense of dissatisfaction.

Although I came to Gears 3 not expecting drastic changes, I was still a bit surprised at how plodding and predictable it felt. There were big set pieces and "wow" moments designed to get the blood pumping, but little of it had much impact. It is, essentially, the same sort of thing Gears has offered before, but this time the magic had worn off. Rather than getting caught up in the moment, I was mechanically going through motions I'd already been through twice. That's not to say it was bad, necessarily, just that it wasn't different enough—there's only so much adrenaline to be generated by room after room of waist-high cover objects and enemies at the far side.

While spending a few minutes with occasional survivors and piecing together what must have happened in the game's final area were interesting non-combat peeks into the Gears world, I wouldn't have minded seeing even more mortar in the gaps. I certainly would have appreciated more "incidental" firefights between Lambent and Locust, more variety in the game's flow, or something else to help to create the illusion that the planet my troopers were fighting to save was more than a series of obvious target zones. That said, laying waste to all opposition ticks all the boxes it needs to. Guns are fired, enemies go down.

However, while the action is to spec, I was puzzled and disappointed by the characterizations and story in general. It's true that Gears of War has always been rightly pegged as something that didn't concern itself with complicated story arcs or deep character work. On the other hand, after well and truly covering the bro aspects of a squad in the shit twice before, this final chapter seemed a perfect place to take it a half-step further. Unfortunately, as with the game in general, that was not meant to be.

While I applaud the addition of female COG troopers and the fact that they weren't used as jokes or as sexual objects, the rest of the script is inert despite several ham-handed attempts to pull the heartstrings. For example, the first "emotional scene" with Cole had me utterly confused—I couldn't tell if it was supposed to be genuinely touching, or if it was intended to make me laugh. Either way, it bombed. The next "big scene" can't be discussed without enormous spoilers, but I will say that it felt noticeably forced, and the slow-motion-with-somber-music accompanying it was almost a parody of the famous Gears television commercials.

Those awkward emo scenes were bad, but I was at a total loss with regard to main character Marcus Fenix. At the absolute end of the conflict, he's clumsily set up to commit an act of violence which I found disturbing; not only does it seem to indicate that he's either incapable of (or unwilling to) participate in higher thought processes, I could make no sense as to what message Epic was trying to give. Was their intent to portray Marcus as nothing more than a low-level footsoldier who can't see past the trenches? Were they trying to show that even the toughest COG trooper could be overwhelmed by emotion? Or worse yet, were players actually supposed to cheer at his choice, defiantly made in the face of information which would make any person with half a brain pause?

Epic goes out of their way to taunt the player with questions that don't get answered at the end of Gears 3, and not only do they leave these loose ends dangling, for me they left Marcus Fenix's true nature unresolved. Whether that was an intentional (if murky) artistic choice, or a cruel hook attached to "illuminating" DLC coming at some point in the future, it left a bitter taste in my mouth. Rather than the perfect end to a thrilling series, it seemed like the developers were afraid to take real risks with either the story or the gameplay of Gears 3. Hoo-rah? Rating: 6.5 out of 10.

Parents: According to the ESRB, this game contains blood and gore, intense violence, and strong language. Parents, despite the popularity of the franchise, please keep children away from this one. There's plenty of salty language and the game is all about killing humanoids and assorted monsters in various bloody ways—and the gore is not skimped on. Although there is no sexual content, it's quite clear to see that the game is aimed squarely at adult players. No small ones allowed.

Deaf & Hard of Hearing: You shouldn't have too much difficulty. Although it is a fast-paced game, there are on-screen prompts showing the direction of incoming attacks when enemies are off-screen, and there are subtitles available for all dialogue.

So, I am digging this up due to related research. The scene with Cole hit me super hard – The Cole Train has always been a semi-cartoonish character in the world of Gears. Which is hilarious given how ridiculous the premise was in the first place. But while others are freaking out and afraid of what might happen next, Cole is this bundle of goof that is more or less along for the ride. When it has you play through his flashback/overlap with the real world – it made me realise that Cole Train actually might be completely delusional. He… Read more »

it seems to me that marcus final “action” was a cap for the whole attitude and angle of the gears of war franchise.

Hey everybody. Thanks for the comments. Just to clarify, I did play the entire campaign in co-op, and I’ve edited the main review disclaimer to reflect that. Sorry for any confusion, and thanks for bringing it to my attention. I didn’t find anything particularly noteworthy to discuss in relation to playing specifically in co-op, so that’s why it’s not brought up in the text of the review. As for the “why we don’t cover multiplayer” – sometimes we do, sometimes we don’t. We don’t have a specific site policy about requiring coverage of every single mode, etc. so it’s really… Read more »

It’s important to remember that a significant number of gamers never play online at all. I don’t have the numbers. But many people play games like CoD and Gears of War and never take the game online. They play the campaign, and then put the game aside. Or maybe they play the game co-op with a friend offline. So I suppose this type of review would be useful to this sort of person. Having said that, the disclosure at the bottom of the review needs to distinguish between “co-op” and “versus” multiplayer. How many of those 12 hours were spent… Read more »

The team has at numerous times explained on their podcast why they believe the “fun factor” and multiplayer reviews are secondary – mostly because of the fact that you can have fun with friends doing anything (even playing a crappy game or making “sandwiches”) and so that doesn’t help judge a game fairly. Now take it or leave it but I think their stance is pretty much voluntary.

Brad, I completely agree with your review. I am a huge Gears fan, but Gears 3 just felt… meh. It’s extremely polished, yet shockingly predictable. I played the entire campaign with another player, and went in knowing that I would be getting more of the same bloody goodness, but there was just something missing. I, too, thought that the DLC might tie up some loose ends, but with 3 of the 4 planned DLC packs already released, I don’t have much hope. As a final note, I can’t believe the designers made you fetch fuel like, what, 4 different times?… Read more »

While reviewing only the campaign might make sense for a game like uncharted (as you explained in the podcast), gears has always been about co-op and MP. You really are turning into singleplayergamecritics.com… You might want to hire people who actually enjoy playing MP (and not only in games made by Valve).Because gears3’s horde and versus are amazing and very polished, miles better than gears2, and this (great) website is starting to sound a bit, I don’t know, misanthropic. You say you played the campaign in co-op, and yet don’t give your thoughts – are the levels busy enough to… Read more »

Yet another superb review from Brad here; well done sir. Personally, I’d just like to highlight how hilarious I find it when people constantly criticise Nintendo for “recycling” Mario, Zelda, Metroid (etc…) yet every single Gears of War is practically the same. The graphics engine is the same, the gameplay is the same, and the environments are – bar a few exceptions – the same (bland, brown, and repetitive). Oh yeah, and the story is utter BS and akin to Transformers: Revenge of the Fallen in terms of depth, and narrative; none of this ever changes, yet the scores get… Read more »