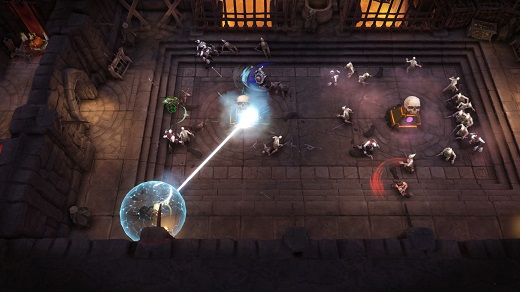 HIGH The Wizard is awesome!

LOW Waiting for skull coins to be earned so I can rejoin the game.

WTF Losing potions between levels is an awful design choice.

Once a person has savored the best of a category, it can be tough to be satisfied with less. After all, if access to something superior exists, why spend time with a thing that's clearly not as good? Case in point, Gauntlet: Slayer Edition.

The non-Slayer edition of this Gauntlet reboot was released by Arrowhead Game Studios on the PC in 2014. It seemed interesting, but I didn't get to it before it dropped off the radar. The studio went on to release Helldivers a year later in 2015, and that quickly became one of my favorite games… of all time.

As such a huge fan Arrowhead's current jam, I was interested in seeing what I missed, but the time spent with Gauntlet: Slayer Edition was a letdown—it's clear that the developers learned a few things in the time between releases, and there's little reason to play this lesser work.

This revamped re-imagining of 1985's arcade classic lets up to four players assault a multi-level dungeon that's filled to bursting with enemies. It's rendered from a top-down perspective, and four different classes are initially selectable: Warrior, Valkyrie, Wizard, and Elf. A fifth character, the Necromancer, is available as DLC. Once a party is assembled, the crew goes into a level to kill swarms of enemies, collect gold, and… that's about it.

While this formula is largely the same as the source material, the most notable change is in how the characters control. Each one handles slightly differently, and they all have unique abilities that work best when together as a team. The Elf is a long-range bow user, the Valkyrie has strong shielding, the Barbarian is a straight-up damage dealer, and the Wizard is a jack of all trades.

Speaking of the Wizard, he is by far the best thing about this Gauntlet, and I absolutely adore the way he plays. Using a spellbook as a weapon, he's able to combine different elements on the fly using two-button combinations. With default equipment, he shoots fireballs by pressing triangle + triangle, but triangle + square turns him into a pair of flaming snakes that can make quick escapes. Square + square shoots a powerful icy laser that limits his mobility, but it's great when teamed up with the shield created with circle + circle. He's got plenty of other tricks, too.

I love the Wizard, and he's so interesting and versatile that I could easily see an entire game based around him as a solo character. Unfortunately, the rest of the cast is pretty ho-hum, and none are as interesting or as deep as he is. They've all got alt-weapons to choose from (after being bought from the shop) but most of the variations aren't too dramatic, and the supporting equipment (potions and relics) feel non-essential at best.

This oversimplicity of the characters is just a symptom of Gauntlet's larger problem—the core design is too straightforward. While there's value in paying homage to the original, the fact is that the game was amazing in arcades 30 (yes, thirty!) years ago because being able to play with three friends was mindblowing at the time. Such a feature is commonplace these days, and with generic dungeon designs, basic combat, and fairly standard classes, Slayer Edition runs out of gas quickly.

For the review I gathered two others to play with me on the same couch and it was an OK time, but that's faint praise since any game gets better with others. Despite friends it was still too repetitive, with far too little nuance or sophistication. In fact, it was so humdrum that we were only able to play in short bursts because everyone lost interest after a few maps.

The nails in the coffin? When players die, they can only be revived if the group has at least one ‘skull coin.' Without one, the downed person has to sit out and twiddle their thumbs until a coin is earned, and these forced pauses in team play absolutely killed what little enjoyment we would muster. It's also absurd that special ability potions collected by players are taken away at the start of each level. I'd try to save them for emergencies, but was usually forced to forfeit them after a successful run.

As for Gauntlet's solo experience? Forget it. It's clearly designed as a multiplayer game from the get-go—and that's absolutely fair—but I tried it alone a few times since the option was included. Unsurprisingly, the game became even more tedious with no one on the couch to chat with, and jumping into random games wasn't enjoyable since I don't chat with randoms, and communication is necessary to achieve success on anything past the easiest difficulty.

My time with Gauntlet was educational since its existence was clearly a step in the process that led to Helldivers. As an experience unto itself? It's neither satisfying nor worthwhile, and I can't recommend Gauntlet: Slayer Edition to anyone when a superior product from the same developer is readily available on the same platform. Rating: 5 out of 10

Parents: According to the ESRB, this game contains: violence, blood and gore. Honestly, it's kind of a joke that this game is rated M. The graphics are tiny, and the violence is the most standard hack-and-slash imaginable. I didn't find it particularly gory, and played it with my kids without any hesitation. In this case, the ESRB is being way too sensitive.

Deaf & Hard of Hearing: No problems here. There are only tiny bits of flavor dialogue here and there (subtitled) and none of it is relevant to playing successfully. It's fully accessible.