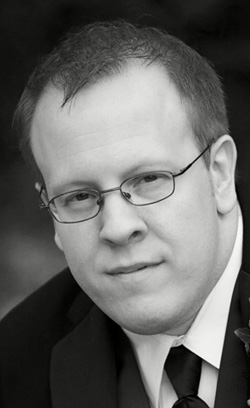 (Instead of my usual ranting and raving tonight, I am  incredibly honored to present an essay written by one of my favorite Fantasy authors, the charming and talented Anton Strout. Given his status as a writer and a gamer, I asked him for a few words on both subjects combined. Surprising the hell out of me, he was gracious enough to accommodate despite an incredibly busy schedule. Without further ado, here's what he had to say… —Brad Gallaway)

Hello, and thanks for having me. Before I begin my guest spot here, let me get my introduction and a bit of shameless self-promotion out of the way so you know who you're dealing with.

I'm the author of the Simon Canderous urban fantasy series for Ace Books which include Dead To Me, Deader Still and the latest book, Dead Matter. I can also be found in a variety of anthologies—some of which include Simon Canderous tie-in stories—including: Boondocks Fantasy, The Dimension Next Door, A Girl's Guide to Guns & Monsters, Pandora's Closet, Spells of the City, and Zombie Raccoons & Killer Bunnies (my favorite name of them all).

I currently live in the haunted corn maze that is New Jersey and, most importantly, I am the worlds most casual and controller-smashing video gamer. I am also prone to hyperbole.

Making a video game comprises many a part, but what makes a game come alive? Is it the gameplay? The music? The character or level designs? The story? Certainly all of the above, and if one of those elements is lacking, a great game can become a mediocre one. But since I'm a story slinger by trade, I'd like to talk about the writing in games.

As a writer/gamer, I am in the habit of dissecting the things I experience. My content creator eye can't help it. I need to know what makes things tick. Where does the heart come from in a game? More and more, I think story has grown over the years. Just take a look at Resident Evil 5 dialogue now compared to that of the "master of unlocking" clips from Resident Evil 1. There's a ton of games I could talk about, but I'm going to go with a few here that struck a chord with me in my development as a writer.

People often ask me to define why I write what I write and funnily enough, my answers tie in to gaming. When I elevator pitch my books for people, I usually tell them I write Jim Butcher Lite urban fantasy novels, basically because I miss Ghostbusters and Buffy the Vampire Slayer.

It's no coincidence, then, that these two television and movie franchises both have games.

Ghostbusters has come a long way in story development since its Commodore 64 version (where I basically maxed out my Ecto-1 with all the best equipment, then sadly my friend's mother threw away our account numbers for all our stuff). The story of the recent game version was critical enough that it was actually written by the screenwriters of the film and playing it is feels like being immersed in a brand new Ghostbusters film. It helps that it also has many of the original voice actors, art design and such on top of a fun plot, but the writing really helps pull all those elements together. It's no different than what I'm trying to do when I structure a novel. Short of writing actual gaming code, I need to create all those atmospheric elements so the reader immerses themselves into a world where they believe it's possible to be chased down by a demonic carnivorous bookcase. 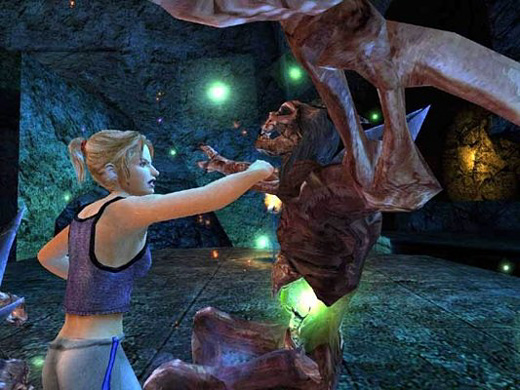 When I first picked up the Buffy the Vampire Slayer video game, I was worried. Movie and television tie-in games are almost always questionable, but I have to say the 2002 game and it's follow up in 2004, Chaos Bleeds, was written like an actual episode and caught the essence of what the show was. Despite a lot of the humor in it, a lot of the game creeped me the hell out as well. The writing set a tone and a mood that were furthered by all the other elements. When I learned that my fellow urban fantasy writer and friend Tom Sniegoski actually wrote them, I was jealous as hell that he got to do it.

Roger Ebert recently wrote that video games can never be art. I like a lot of what he has to say about movies, in this case, I think he's dead wrong (despite the large amount of things he can quote in his original article.)

Defining what is art is subjective, as proven by thousands of years of people trying to define aesthetics. I know what it is to me. It's anything that's crafted that I can experience and it evokes something in me from my interaction with it.

And games do that for me. The Legend of Zelda: The Ocarina of Time, for instance, was one of the first games to make me cry. Even with only subtitles and no voice acting, the storyline brought me to tears with Link's shift from adolescence to an adult and the way the world changed between that. I laughed out loud and wanted to dance with the king of the Gorons when Link found the song to cheer him and played it for him. I can still remember him shouting, all caps, HOT HOT HOT! If that ain't art, then I don't know what is.

Writing is an integral and more and more important part of the game creation process, probably even more so in games that are 100% original content, but that's a guest post for another day…

Again, thanks for having me and if you are so inclined, please go check out the books!

(Infinite thanks to Anton Strout, controller-smashing player and author extraordinaire. If you're in the market for an exciting Urban Fantasy page-turner, take the man's advice and go check out his books. If you'd like to learn more about Anton, you can visit his website, or follow him on Twitter, and I can tell you first-hand that he tweets some pretty amusing stuff. — Brad)

cool post, very intetresting to read especially for someone like me whos just getting into the videogaming wrld. what’s your top favorite game, or at least top 5, and what game would you recommend to an amateur?