My good friend Andrew Groen (@ScienceGroen on Twitter) has just put out one of the most valuable games-related articles I've ever read—how much money do reviewers and games writers actually make?

If you're thinking about a full-time career playing games and getting paid to write about it, definitely take the time to read this piece over at GamesRadar and see if the reality lives up to your expectations. My hat is off to Andrew for doing this piece… everybody I know has asked this question at one time or another, and very rarely have I ever heard a definite answer. 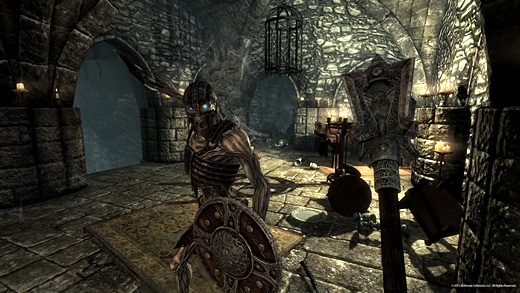 So I've formally bailed on The Elder Scrolls V: Skyrim

. However, after my initial post about being tired of it after fifteen hours, I was inundated with comments from people on Twitter and elsewhere regarding my lack of enthusiasm for it.

There were two big themes that kept popping up from fans of the game. The first was that I was "doing it wrong" by spending time on quests and not spending more time wandering through the landscape, discovering things as I went.

The second point people made was that I "needed to see XYZ quest", meaning that the good stuff was elsewhere and I had been putting time into parts of the game that weren’t very good.

To both of these comments, I pose the following question: if I spent fifteen hours doing it wrong and completing bad quests, why is it so hard to find the good stuff?

For a game that's ostensibly about doing things the way that you want to, it doesn't make a lot of sense to me that the way I want to do things is the wrong way. I'm also a little surprised at how much of a pass the game seems to get for having a lot of quests which are less-than-thrilling.

I'm not bringing this up just to rag on Skyrim—it's not my cup of tea and I accept that, and I also accept that there are loads and loads of people out there who think it's pretty fantastic. That's fine, and I genuinely have no problem with that. However, I do think it's interesting that so many people were so eager to explain to me why I wasn't enjoying the game. After all, isn't it Bethesda’s job to craft a product which is well-made and appealing? Shouldn't a great game be fun and engaging without someone there to explain the "proper" way to appreciate it?

If starting the game and playing it as it's presented to me means that I'm doing it wrong, then I think that points out a fundamental flaw in Skyrim's design rather than a problem with how I'm approaching the game as a player.

Just something to think about.

I admire your reviews and look forward to your comments, Brad, but your limp assessment of Skyrim is a disservice to your readers. Take a break if necessary and go back and finish the game. After all, you excoriated Dragon Age 2 for it’s cut and paste dungeons, whereas Skyrim has some of the most brilliant underground levels ever. But not a mention of them from you. And what about the PS3 and Xbox frame-rate issues related to lengthy play? Again, no mention. Skyrim is likely to be named GOTY but you disdain to review it, is that the message… Read more »

I think Brad took an arrow to the knee while he was playing!

For what is worth, I like Skyrim a lot but after reading your take on it I’ve got to say that I agree with you completely. There a lot of problems with the game that can be overwhelming to some gamers. As you said, it’s not your cup of tea. And any comparison with Fallout 3 is doomed. Although both games are open world sandboxes and made by Bethesda, in Fallout 3 the protagonist were the NPC’s, their personalities, conflicts and your relationship with them. In Skyrim what’s important is the world, landscape and exploration. They are two very different… Read more »

I have over 90 hours into this game and I have to say it is rather disappointing. The common counter argument I see with most complaints runs along the lines of: It is an open world what else do you expect? Fallout 3 is an open world as well, and the first couple of hours are far more interesting than 90 hours of Skyrim. While being far fewer, the quests were more interesting and engaging. The characters were also better in Fallout (Moira was a bamf). The combat between the two games is different ( guns vs. swords and magic),… Read more »

What I don’t understand is how you can love Fallout, but have no interest in this. Now, people are trying to say you are playing it wrong, which is just stupid. How you want to play is how you want to play. However, with how big a game it is, there is a really high chance that you did actually run into a string of boring tasks. I won’t deny that Skyrim has some seriously boring stuff in it, but so did both Fallout games. I got as tired of ghouls, just like I am of draugr in Skyrim. I… Read more »