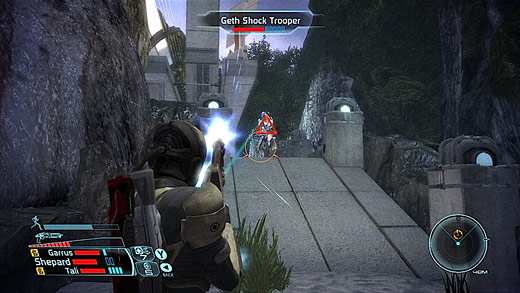 Getting close to wrapping up my second time through Mass Effect, and since I almost never replay games, it's been an interesting experience. A friend asked me today how it was going through again, and to be perfectly honest, it wasn't nearly as fun as it was the first time.

Don't get me wrong—I'm not saying that there's anything the matter with the game itself, it's more about the kind of player that I am.

For me, the thing that drives me forward in video games is the feeling of discovery, and a personal curiosity to see what lies ahead. As long as I'm interested in seeing how a particular game's story turns out, or if a talented developer keeps surprising me with new mechanics and formula twists, I'm there. However, if I already know what's coming, then most of the appeal is gone for me, no matter how good the quality of the game itself.

Crusading through the universe with Commander Shepard again, there was a certain quality missing from the experience… A little bit of the mystery stripped away; a little bit of the magic gone. Although the very fact that I bothered to play the game again (going for all available quests with the exception of the ultra-tedious collection missions) speaks volumes about the quality of the game, I have to be frank in saying that it just wasn't the same. I wasn't in the kind of feverish, get-back-to-the-360-ASAP grip of must-play madness that I felt the first time.

Why not? It's because I knew what was coming.

With the knowledge that there were no more surprises; no more left-field revelations or new challenges to overcome, the game ceased to be an interstellar escapist adventure of the highest order, and instead became a very good game that I played. But still, just a game. As I was checking off quests on the way to achieving level 60, my brain was often distracted from what was going on in front of me, thinking about the new titles I have waiting in my to-play stack.

It just wasn't the same.

Some people may think I'm a little odd for only playing games once, but there are players of every stripe. It takes all kinds to create an industry and an audience as large and as pervasive as video games are today.

Although I'm sure some people reading this blog can't relate at all to the idea that there would be little-to-no appeal in revisiting a superb disc, that's no stranger than being the kind of player who combs every inch of a title to collect 100 hidden gold icons stashed away in the furthest corners of geometry, or the sort of player that gets every character in their party up to level 99 before beating the last boss.

It's no stranger than the kind of drive that makes people perfect second-shaving speed runs, or practice and memorize their performance so many times that they can clear levels with their eyes closed.

It's no stranger than the kind of player who buys a brand-new game and jumps straight into the multiplayer to shoot their friends in the face for for two weeks before even touching the campaign mode, and it's certainly no stranger than the compulsion of someone who regularly buys the newest, hottest title only to quit after the first three levels and trade it back in the next week for the next big thing.

Are any of these kinds of players more "true" or more legitimate than the others? Not really. Although the thought of spending more than fifteen minutes playing capture-the-flag would be enough to drive me towards any other kind of activity rather than sit around and repeat the same actions over and over without a finite endpoint, there's nothing wrong with that for people who enjoy it. Conversely, some would call me crazy for buying a game that I knew in advance I would likely only go through once, but that's just fine with me. It's how I prefer it.

It really does take all kinds. Though an entire legion of us may unite under the "gamer" banner, we're just as diverse and varied a group as any other. The thing that I'm thankful for, I suppose, is that I actually know which kind of gamer I am and I'm all right with it—and by being all right with myself, I'm just fine with every other gamer, too.

Didn’t mind the combat so much personally, but yeah the texture problems did get really annoying. Inventory management was by far my biggest hangup though.

Unfortunately I buy games much quicker than I could play them. This results in having a lot of half played games. I do like to revisit games. Even if I don’t play them all of the way through. I admire the work put into a game more so than being captivated by the story. So I could replay an area of a game over and over and not be bothered by the fact that it is not new to me. I like environments in games. I also enjoy games that I could play in short bursts like Street Fighter, side-scrolling… Read more »

[quote=Richard Naik][quote=abfackeln]Mass Effect is a game I reeeally want to like. I never wanted to like a game that I didn’t enjoy as much as Mass Effect. The glitches were just too much for me. A game from such a high profile developer should have so many glitches. I plan on trying to play this game for the third time. The buzz surrounding the sequel has me excited. I am just afraid to be let down again. [/quote] Are you playing the console or the PC version? The PC version did have quite a few problems, but I don’t remember… Read more »

I replay games very rarely. Civ 2, Master of Orion 2, X-Com and Alpha Centaury are games I played a couple of times. Each time with a different approach to achieve a different ending. For example in Master of Orion 2 I played with pretty much every race ’till I either destroyed Antares or enslaved the entire galaxy. Or win the election to reign supreme since I simply have more votes than everyone else together. Yes, I would be a pretty effective Palpatine. Those flimsy rebels… Currently I’m replaying Mass Effect in preparation for ME2. BUT I already feel to… Read more »

Just imagine how great the internet would be if we could get all gamers to first pause and say to themselves: “but this person i’m about to flame is just a different type of gamer.”

I am the same way Brad. I can’t replay a game. I just can’t. I tried to do it a few times (e.g. God of War in Hard mode, Far Cry 2 with permanent death) but i simply want to move on to another game.

I have a friend who played Resident Evil 4 6-8 times to unlock the unlimited rocket launcher. I could never do that but i agree it does not make us less or more worthy, only a different kind of gamer.

I suspect I must be an oddball gamer; I buy only a few games each year and choose them very carefully. I then beat the shit out of them, immersing myself completely and replaying them dozens of times. I’m definitely slightly neurotic when it comes to games that I love; I become obsessed with achieving the “perfect” playthrough.

[quote=abfackeln]Mass Effect is a game I reeeally want to like. I never wanted to like a game that I didn’t enjoy as much as Mass Effect. The glitches were just too much for me. A game from such a high profile developer should have so many glitches. I plan on trying to play this game for the third time. The buzz surrounding the sequel has me excited. I am just afraid to be let down again. [/quote] Are you playing the console or the PC version? The PC version did have quite a few problems, but I don’t remember any… Read more »

Mass Effect is a game I reeeally want to like. I never wanted to like a game that I didn’t enjoy as much as Mass Effect. The glitches were just too much for me. A game from such a high profile developer should have so many glitches.

I plan on trying to play this game for the third time. The buzz surrounding the sequel has me excited. I am just afraid to be let down again.

I hear you. I feel the same way – exploration and discovery are the best part of a game for me.

However, I am also blessed with a short memory, so given enough time I’m often able to play a game again, spoiler free. 🙂

When I was younger, I would replay games all the time, sometimes getting close to the 150 hour mark on some titles. Nowadays however, I rarely if ever replay something outside of multiplayer titles. The exceptions usually include things like Mass Effect and Dragon Age, games where it is impossible to explore all possible paths in one (or even two) playthroughs. I replayed the original Metroid Prime about 7 months ago, and I gave The Witcher another spin to see if my impressions would change (they didn’t), but beyond that I just don’t have the time anymore when there are… Read more »