Although I haven't had as much game time as usual lately, I was able to sneak in a few sessions with Ghostbusters: The Video Game on PlayStation 3. 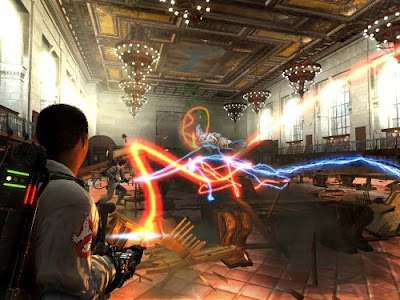 I haven't checked any FAQs, but I'd estimate I'm about halfway through or so—before I started, I was hoping that the game would be at least decent, but I'm quite glad to report that it's actually fantastic. Without a doubt, it's certainly among the best license-based games ever created, if not the best. Besides that, it's great just as a game, license or not.

Although I certainly think anyone would be able to enjoy the action, I'd guess that it's at least twice as good for people (like me) who are fans of the film.

(…And yes, I said film. The first movie was great, and I think everyone can pretty much agree that the sequel sucked. Luckily, it seems as though the game can be taken as a continuation of the events from the original movie. At least, I haven't seen anything that really acknowledges the existence of Ghostbusters 2.) 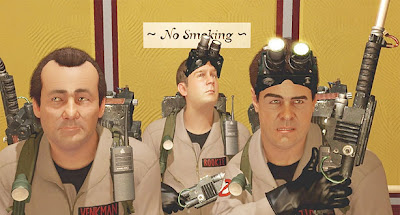 By far the best aspect is the absolute ton of scripting and voice work done by the original actors are reprising their roles, with the exceptions of Rick Moranis and Sigourney Weaver. Although it would've been nice to have them on board, I have to admit that it might have been a little bit of a stretch getting their characters worked into the plot. Honestly, they aren't much of a loss.

I'm also quite taken with the team approach implemented by developer Terminal Reality.

Instances where the player finds himself alone are few and far between, and being accompanied by chatty, active partners for the lions' share of gameplay is incredibly entertaining. Really, it gives a very unusual (yet welcome) feeling to the proceedings that I would love to see other developers emulate. 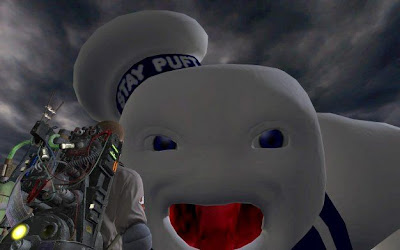 Oh, and the gameplay is actually quite excellent. Did I not mention that yet? The proton packs used to tackle ghosts in the film have been greatly expanded to feature four different types of functions accessed via the D-pad, and so far there has been a great balance between fodder ghosts (used to keep the energy level up) and more significant supernatural encounters. I wasn't quite sure how the game would play out, but exploring different locales and trapping ghosts is actually more entertaining than I had dared hope.

Great graphics, great music, lots of little touches for the fans… Ghostbusters is just a fantastic game any way you slice it and I couldn't be happier. Development community take note: this is exactly how a licensed game should be made. Let's have more like it, please.

Finally, one last thing: Kotaku had a great piece about how the Wii's motion controls are sort of… fail. I thought it was an interesting bit to chew on.