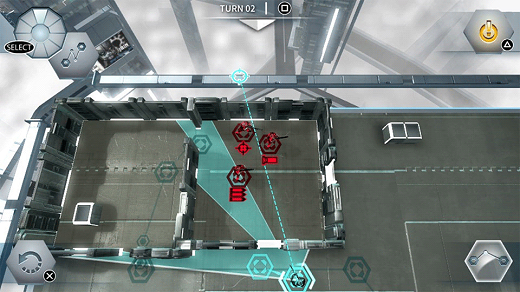 HIGH Watching a perfectly-done replay is a thing of tactical beauty.

LOW Getting shot by a machine gunner from across the map and through two windows.

WTF My shapeform is waiting for the enemy and the AI still gets the drop on him?!?

I heard nothing but raves for Frozen Synapse when it hit the PC in 2011. As a longtime strategy and tactics fan I was intrigued, but I prefer to play games away from my desk, so I never looked into it. I guess the waiting paid off—Double Eleven has released a new version called Frozen Synapse Prime for the PS3 and Vita. As far as tactics experiences go, it's probably the deepest and purest I've seen in a while.

Frozen Synapse Prime puts the player in the role of "Tactics"—a character recruited to handle the, uh, tactics for resistance fighters pushing back against a corporate oppressor in a world where sentient AIs exist, and techno-organic hybrid humanoids called Shapeforms are used as meat soldiers on both sides of the conflict.

The story is suggestive without being explicit about who's doing what and who's who. It reminds me a bit of trying to read a William Gibson novel for the first time—the reader is treated as though he's smart enough to figure things out without the author detailing every bit. I appreciate the similar tone here, although more context wouldn't have hurt—are the levels cyberspace or the real world? No clue. However, story is probably the least likely reason why someone would want to spend time with Prime.

Using a structure rarely seen, the player gives orders to their Shapeforms in battle, down to the smallest detail. Multiple waypoints can be set on the map and at each one the ‘Forms can be told to look in a direction, duck down, cover a zone, aim at a certain enemy, and more. Once commands have been entered and confirmed, friendly and enemy troops execute their moves at the same time.

Unlike the "I go/you go/I go again" turn-based system of action and reaction in most tactics games, there's quite a bit of drama in how each round of Prime plays out. Lying in wait for an enemy can easily backfire if the AI chooses to go the opposite way, and ducking into a ‘safe' corner might not be so safe if an enemy Shapeform shifts position and gets line-of-sight. This technique of planning for player and enemy troops requires careful thought, and flexes tactical muscles not often used.

After acclimating to it, I found this same-time system to be rich, and when a round went well for me, I felt like a tactics mastermind. Relishing kill-cam replays showing my glowing blue Shapeforms taking out enemy reds with impunity never got old. On the other hand, when I miscalculated or had a run of bad luck… Well, let's just say that the frustration factor in Prime can ramp up pretty quickly.

Part of the issue is that the game isn't very clear about how all the systems work, or exactly what the differences are between the wealth of options. For example, I would frequently have Shapeforms guarding a door with weapons ready, and when enemies walked through, they somehow still got the drop on me. Why? I had no idea. I was also unclear about the benefits (or drawbacks) of having a unit ‘aim' instead of ‘target.' They seem redundant at times, but are they really? And exactly how much randomness comes into play during machinegun fire? The game wasn't forthcoming about details, and as we all know, the devil is often in them.

Failure wouldn't be so bad except for that fact that are no checkpoints in Prime. The missions aren't overly long, but with how much time it can take to plan an individual string of moves for multiple characters across multiple rounds, it's easy to sink 15-20 minutes or more before losing, and a loss means a complete do-over from the mission start. Combine this with instances where enemies appear unexpectedly or when overly-strict win/loss conditions are set (the enemy's toe poked inside my safe zone before he was shot and I still lose?) and Prime can quickly start feeling more punishing than is tolerable.

Apart from the campaign, I had several friends who told me the original Frozen Synapse had outstanding multiplayer. I believe it. Unfortunately, I couldn't duplicate that experience on Vita. I was frequently unable to find players online, and when I did, I never progressed past the first turn. Apparently the game offers an asynchronous mode where people don't actually battle in real time. It's a good idea, but it's hard to maintain interest when I have to wait ten hours between turn 1 and turn 2.

While the multi never panned out for me and the campaign missions can sometimes be more frustrating than fun, there's something undeniably juicy about Frozen Synapse Prime. Despite some discouraging defeats, I found myself coming back to it again and again in an effort to find the perfect plan for every situation. The mission structure is a great fit for the Vita and I'm nowhere near the end, so I imagine I'll be earnestly chipping away at it for some time to come. Rating: 7.5 out of 10.


Disclosures: This game was obtained via publisher and reviewed on the Vita. Approximately 12 hours of play were devoted to the single-player mode, and the game was not completed. 1 hour of play was spent in multiplayer modes.

Parents: According to the ESRB, this game contains: violence and blood. Although the in-game characters are clones (or something) they look like Tron people that bleed and die with some blood spatter. It's not the most graphic thing I've seen, but it's probably more appropriate for older kids—which is fine, since the game is too complicated  for young'uns anyway.

Deaf & Hard of Hearing: All dialogue is presented with text, and there are no audio cues necessary for play. I spent probably 90% of my time with the sound completely off, and had no problems. Totally accessible.