Not Quite Worthy of Worship 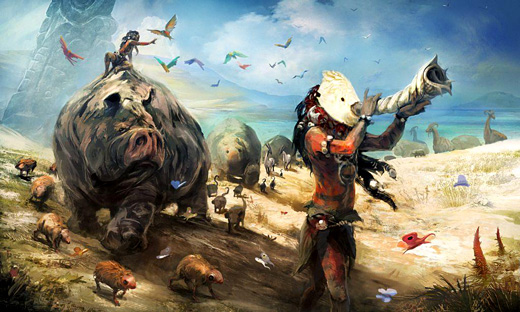 HIGH The "Emergence" mission is awe-inspiring.

LOW The frustrating "Wildfire" mission comes too early in the campaign.

As a reviewer who spends time keeping up with latest news, it's not often that I don't know everything about a given release. However, that was certainly the case with From Dust. I had heard the name mentioned once or twice and I knew that Eric Chahi (of seminal Another World fame) was the man behind it, but nothing else—and you know what? That was all right with me.

The problem with learning all the details about a game months before release is that it can suck the magic out of it. To be able to walk blind into a project these days is a rare treat, so it was with great anticipation that I sat down with the From Dust. What were the mechanics? What would I do? What was the story about? For me, discovery is half the enjoyment of any title.

… Unfortunately, the only thing I discovered is that From Dust is an undercooked effort full of rough edges, unpleasant design decisions and a wildly uneven difficulty curve. My anticipation became regret and annoyance almost immediately.

From Dust places the player in the role of a spirit (also known as a cursor) and charges them with guiding a tribe of islanders through natural-disaster obstacles to a safe refuge where vanished "ancients" went before. Having the power to raise islands from the sea, redirect lava flows and drain massive lakes at will seems to be a perfect fit for playing a deity in tropical environments, but in practice From Dust is mostly an earth science simulator with a bit of game crammed uncomfortably in its back end. There's plenty of potential here, but nearly every aspect needs a tweak (at best) or a complete overhaul (at worst.) 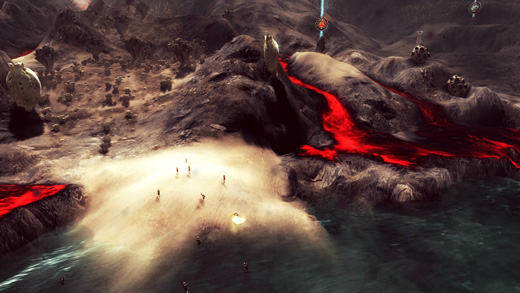 For example, the game's camera is totally unsatisfactory. The player has a choice between too far or ridiculously close, with nothing in between. Taking the bird's eye view means that much of the game's detail is lost, and it becomes challenging to place land or lava with specificity. The up-close view is just flat-out worthless. Aggravating the lack of efficient camera control is that maneuvering the god-cursor is a clumsy affair. Trying to spot-fill a watery hole or lay a firebreak on the right ridge can be a challenge in precision.

From Dust's handling of the tribespeople is also poorly done. They are ostensibly an integral part of the game, yet there's no real significance to any one individual; no abilities or unique qualities, nor are there any worship ceremonies or any interaction between the god and its folk on a group scale. Despite featuring prominently in cut-scenes and at the beginning of each level, the islanders are nothing more than a personality-free resource. Making things worse, this resource exhibits some of the worst pathfinding logic I've ever seen.

The issue is that the god-cursor can never give them direct orders, or even have any direct effect on them. If one's drowning in a river or being boiled in lava, it can do naught but bear witness. Thanks to this hands-off approach, the little devils often prove to be stubborn obstacles that must be suffered.

When trying to have the villagers capture an idol (necessary to complete a level) I built a straight path from a southern town directly to the goal. After confirming my choice and alerting the people that they needed to take action, the game instead chose to deploy villagers from a town on the opposite end of the island, necessitating travel across water, lava, and a sheer cliff. In other instances, villagers would get stuck in front of microscopic changes in elevation, or for no reason at all. Since it's impossible to finish a level without the AI-based cooperation of villagers, having such poor pathfinding is a source of much frustration. 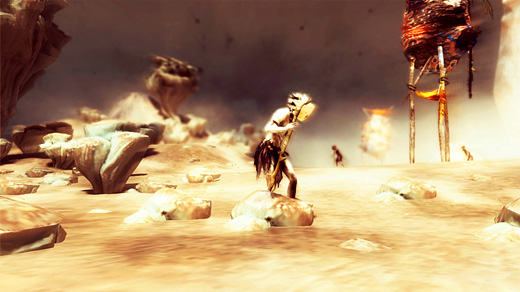 Other problems? Just a few. The omission of any option to speed up the game when things are going at a snail's pace was missed. The difficulty curve is also highly erratic—I struggled through several restarts on one early map, only to sail through the next two or three with no issue at all. There were also occasions when trying to activate two powers at the same time just flat-out malfunctioned, and the game can be quite finicky when trying to establish a village. Just a drop or two of hard-to-see water in the wrong spot, and villagers will refuse to cooperate. There are a number of other minor issues I had, but let's just say that no aspect of From Dust felt as smooth or as optimized as it should be.

So what does it do right?

When the villagers are using their tiny brains and the game isn't pulling a "gotcha!" moment with a surprise flash-flood or lava flow, From Dust can often be beautiful… even majestic at times.

The best segment in the campaign is the "Emergence" map, which is a fantastic illustration of how islands are formed by lava bubbling up from the ocean floor. It's almost as though the game offers an up-close, time-lapse look at the geologic process itself. When a raging wall of water sweeps in and threatens all life on the little island chain that's created, it's a true sight to see. Unfortunately, few of the maps look as beautiful or play as smoothly as this one did.

Another positive worth noting is that From Dust's Challenge mode is a very different beast from the story mode. Rather than touchy, villager-stymieing sandboxes, the challenges are bite-sized areas with very specific goals; things like get five tribesmen across a series of rivers, stop a fire from reaching the village at the end of a spit, or activate water protection for a village before a tsunami hits.  Unfortunately, most of the challenge maps are unlocked by struggling through the campaign and camera/control issues must still be dealt with. By the time access is earned to most of the content, I suspect a player's enthusiasm for it will have drastically waned.

From Dust is an interesting, original and creative project… unfortunately, it never capitalizes on its promise thanks to too many technical problems and a feeling of unpolished awkwardness.  More frustrating and tedious than uplifting and deific, I'd love to see a revamped installment with the kinks ironed out. As it stands, I was all too ready to leave the islands behind and head back to the mainland at the first opportunity. Rating: 4.5 out of 10.


Disclosures: This game was obtained via publisher and reviewed on the Xbox 360. Approximately 9 hours of play were devoted to single-player modes, and the game was completed. There are no multiplayer modes.

Parents: According to the ESRB, this game contains mild violence. To be honest, I think that saying this game contains violence is a bit of a stretch. For most of the game, the villagers are depicted as small specks that occasionally fall into a stream or some lava—not quite what I would consider "violence." There is no questionable language and no sexual content. It may be a bit boring or difficult, but there's nothing here that's unsafe for kids.

Deaf & Hard of Hearing: You won't have any problems. There are no significant auditory cues whatsoever, and all dialogue in the game is littered via subtitles since the villagers speak a fictional foreign language. It's totally accessible.

There’s a few points I disagree with but that’s fair enough; as someone else already pointed out, a review is just a personal opinion. One thing I’d like to mention, though, is the game’s ending which I found to be brilliant. (Spoilers Ahead) It leaves a lot of questions unanswered: who are these people? how long have they existed? how long has this cycle of journey/enlightenment/destruction has been going on? Still, preserving the mystery of the tribe allows the player to draw their own conclusions about the whole experience. When I start a new game, I could easily imagine my… Read more »

This is a good review. Having just finished the game, I find myself agreeing with many of the negative comments as well as all the positive ones. On the positive side, I would like to add that I thought the innovative concept of man vs. nature made it worth suffering through the design flaws. It was different and entertaining to think of myself as some sort of servent to a minor deity tasked with the thankless job of keeping these puny humans alive. Designers take note: please find a way in the story arc to make me feel more rewarded,… Read more »

You’re technically correct, but the gist of what i was trying to say was that the player can’t pick up a villager, give them orders, or have any *direct* contact with them.

Sorry for not being clearer with that point.

I disagree with some points of this, but that’s alright, a review is just an opinion. However one fact was incorrect, if a villager falls into the water there are times where you can save them, either by dropping dirt below them, or by sucking up the water allowing them to grab on to land again. Not a guarantee, but I’ve done it many times.

Like Bastion, this is another honest and fair review. Good work Brad.