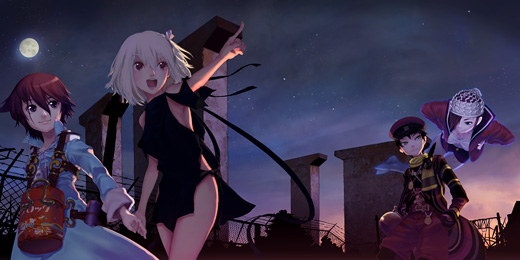 HIGH A premise that hooked me immediately.

LOW The amount of wandering and backtracking.

WTF How did this terrible inventory system get approved?

Fragile Dreams: Farewell Ruins of the Moon is a difficult thing to review. On the one hand, there really aren't that many "serious" efforts on the Wii, and I feel fairly petulant being critical of one when it arrives. On the other hand, only so much allowance can be made for concept and intent; after all, reviewers must base their judgments on what is and not what could or should be. As much as I may want to reward Fragile Dreams for what it attempts, I can't ignore the fact that it's a fairly painful experience.

The premise of the game is quite intriguing—players take on the role of Seto, a 15-year-old boy who finds himself alone in a post-apocalyptic world after his grandfather dies. With no immediate goal other than to find fellow survivors, I was intrigued immediately. Crossing several genres, Fragile Dreams is heavy on atmosphere and story, but is probably best described as a third-person adventure game. However, there's both more and less to it than that.  Its structural design borrows from Survival Horror and RPGs as well as Action/Adventure, yet frustratingly manages to take the worst elements from each while leaving out the best.

Making effective use of the hardware, Seto's flashlight (and viewpoint) is controlled by the Wiimote, with most objects in the environments easily seen thanks to glowing fireflies hovering above them. The Nunchuk's stick handles movement, and combat is mapped to the A button. The developers did a good job of implementing the controls, and I do want to praise them for that—it's usually my main complaint with Wii titles. That said, significant problems in the game's core design become apparent almost immediately after starting play.

Although Fragile Dreams can claim graphics which are moody and quite well-done, the structure underneath them feels extremely clunky and outdated. For example, progress can only be saved at campfires sprinkled liberally throughout each level. Without checkpoints, players must consciously return to these fires to make sure that progress isn't lost. In addition, Seto's inventory is ridiculously small, and it's insanely cumbersome to rearrange items or identify found ones without being at a campfire as well. Between saving and constantly re-allocating inventory space, a player can expect to be making pit stops at firepits on a near-constant basis, effectively destroying the natural flow of play and any feelings of freely exploring each environment. 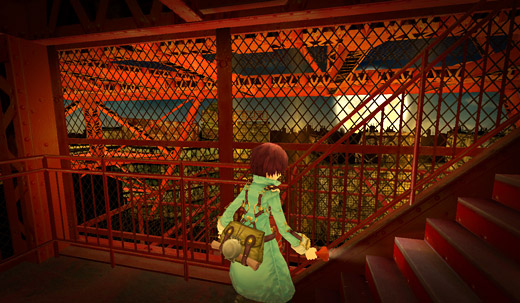 Besides this campfire-centric approach, other problems irritate as well. Rather than exploring a wasted world (or even a city) each area is rather small and has players aimlessly wandering the same ground back and forth until they happen to trigger whichever event is required to progress. Worse, later in the game players must backtrack to previous areas for what amounts to simplistic item fetching.

In some titles, this sort of boredom can be partially alleviated by entertaining combat, but Fragile Dreams stumbles here as well. With all attacking handled by one button, there is no depth or technique to the fights. It can also be quite difficult to gauge distances between Seto and his enemies, resulting in swinging wildly at thin air. (Oh, and did I mention the weapons break?) Asking a player to devote hours to this kind of stuff is the opposite of compelling and feels like an extreme waste of time.

With all that stacked against it, the fact remains that a strong story or cast of characters can often present some redeeming value and smooth over any unpleasantness, but my suspicion is that Fragile Dreams is going to split players into opposing camps of "love it" or "not" with very little room for middle ground.

For a story that seems to be a perfect vehicle for themes of isolation and loneliness, I found it ironic and unsatisfying that once past the starting area, Seto is never really alone. Instead, he's constantly interacting with one character or another in typical JRPG emo-exchanges that are neither sophisticated nor interesting enough to override the lacking gameplay. For being in a desolate shell of a world, there are entirely too many characters around.

Another misstep in the storytelling, Seto often finds "memory items" scattered throughout each level. Each relays a brief vignette attached to things like a shoe, a diary, or a paper crane. I would assume that these items are present to enhance the game's dramatic elements in some way, but it's never satisfactorily explained how Seto is privy to these bits of lore, nor do they ever add up to anything. They simply exist, and do nothing to deepen or enrich the experience. (Adding insult to injury, they also take up inventory space—collecting them means even more trips to the nearest campfire.)

I have to be honest in saying that it was extremely difficult to find motivation to continue playing, and this review is based on an incomplete run. Although the controls were solidly implemented, the graphics were some of the best I've seen on the Wii, and I do believe the developers' hearts were in the right place, Fragile Dreams: Farewell Ruins of the Moon is a tedious, trying experience that didn't offer enough reason for me to carry on in spite of its downsides.  I'm sure that some Wii owners and JRPG connoisseurs will fall in love with its moody nature and deliberate pace, but despite its attempts to be a serious, artistic game on a console that's choked with brightly-colored waggle-heavy cash-ins, I really can't say that its successes outnumber its failures. Rating: 4.0 out of 10.

Disclosures: This game was obtained via publisher and reviewed on the Wii. Approximately 6 hours of play were devoted to the single-player mode, and the game was not completed. There are no multiplayer modes.

Parents: According to the ESRB, this game contains alcohol and tobacco reference, animated blood, fantasy violence, suggestive themes. Although I did not complete the entire game, I did not encounter any significant references to alcohol, tobacco, or sexual content. There is one point in the game where two male characters kiss, but it's more an innocent misunderstanding than something innately sexual. The violence consists of the main character hitting ghosts and monsters with various types of sticks, and it's quite tame.

Deaf & Hard of Hearing: You should be aware that the game makes heavy use of the Wiimote microphone, and with no visual cue on-screen to represent these sounds, hearing-impaired players will run into a significant amount of difficulty, and may actually find it impossible to progress past certain points in the game that rely on sound. This game is not recommended for hearing-impaired players.

Hey Mina. >>I really disagree with everything you said, and I have played the game through all the way twice now. Fragile Dreams in my eyes is perfect. Hey, thanks very much for your reply and I appreciate the time it must taken to write out such a detailed response. In regards to your points, I’m not trying to be flippant at all, but it’s a fact that you can pick any game in the world (and I mean ANY game) and there is somebody out there who says that it’s their favorite and that they love it to no… Read more »

I really disagree with everything you said, and I have played the game through all the way twice now. Fragile Dreams in my eyes is perfect. There is no other game out there like it. I think you completely missed the point of the whole game. For me there are almost no games that I have played that were good to me, all new games these days are the same garbage and even ones that are bearable to play are not that good at all. This is my favorite game in the world. You focus on little things that are… Read more »

I’ll keep that in mind. I’ve got my copy right here, so maybe when I knock a few reviews out, i’ll bump it up my queue…

Any idea how long it takes to go through?

I think now would be a great time for you to check out Baroque, Brad.

It sounds like Fragile is very thematically similar, and from your review I’d say that–at least from a narrative perspective–Baroque succeeds in all of the places that Fragile stumbles. It’d be cool to be able to compare the two.

Baroque plays like crap though, so be mindful of that. 😛

First You should have finished the game > >. Second I get annoyed with games that have an inventory system that just doesn’t make sense. Like legend of Zelda for example, the inventory list is easy and more player friendly, but you have a thousand huge items and it just doesn’t flat out make any sense how your character is carrying all that. In this game your items had some where to be placed, Seto had a pop corn tin (I’m assuming that’s the thing he has in front) and a suit case type thing on the back of him.… Read more »